The art of Azerbaijani carpet weaving is well-known all over the world. Even though rugs and carpets are woven in Dagestan, Georgia and Armenia, ideas of Azerbaijani masters are used all over the Caucasus region. Carpet weaving is an ancient art, but it reached its prime in the Middle Ages, when Azerbaijani carpets became known in the countries of Asia and Europe. Azerbaijan has at least seven carpet-weaving schools. Experts speak about the Baku, Quba, Shirvan, Gyanja, Gazakh, Karabakh and Tebriz schools. In November 2010, “The traditional art of carpet weaving in Azerbaijan” was included on the UNESCO list of non-material cultural heritage of humanity.

There are ancient Azerbaijani carpets in the White House, in the US State Department, in museums of New York, Boston, Philadelphia, Paris, London and the Vatican. And today carpets are a real brand of Azerbaijan.

Yesterday, as part of the Days of Azerbaijani Culture in Cannes, the exhibition 'Azerbaijani Carpets in Art' was opened. Members of the family of President of Azerbaijan visited the ceremony at the Place des Festivals, including the First Lady, the head of the Heydar Aliyev Foundation, Mehriban Aliyeva. 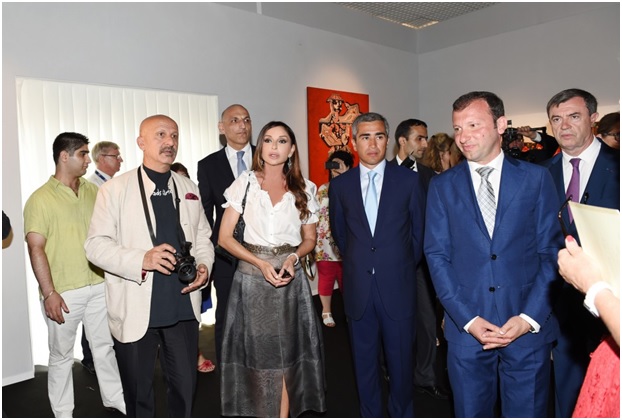 All the items at the exhibition – sketches of carpets, modern- and pop-art-style installations which are based on ethnic carpet motifs – are being presented for the first time.

There are modern pieces of art with 3D effects and sketches of carpets which were created in 1969-1970 by the well-known master Lyatif Kerimov. The exhibition also presents works by the contemporary artist Vugar Muradov. They were created especially for the exhibition.

The exhibition 'Azerbaijani Carpets in Art' will welcome visitors till July 31st. But this is only one of many events which are being held as part of the Days of Azerbaijani Culture in Cannes.

The Heydar Aliyev Foundation organizes such festivals at one of the most popular resorts of the Cote d'-Azur every year to present the ancient and rich history and culture of Azerbaijan to the world. Holding such Days is very important for the propaganda of the culture of the country, which has given the world works of genius.

A few days ago the Baku Group of Fireworks opened the traditional Cannes festival of Pyrotechnical Art to music by Uzer Hadjibeili, Fikret Amirov, Kara Karayev, Tofik Kuliyev, Muslim Magomayev, Alekper Tagiyev, and the outstanding master of mugham, Alim Hasymov. Moreover, there is a statue in Cannes of Nar and Jeiran, symbols of the First European Games Baku-2015.