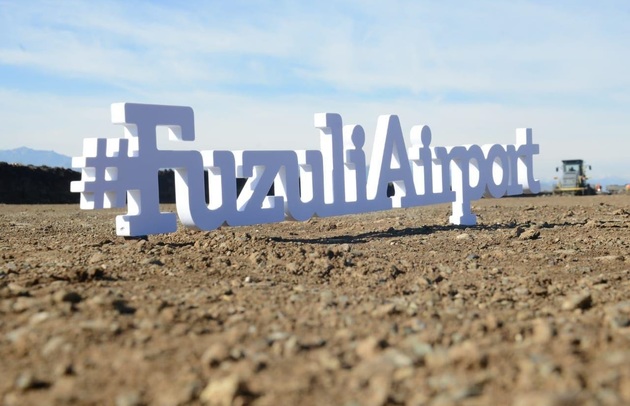 The aircraft of Azerbaijan’s flag carrier, Azerbaijan Airlines (AZAL), received this week the first radio call signs transmitted in the skies over the country's Karabakh region after a nearly 30-year break.

Сaspian News reports that according to AZAL, the airplanes flying over the liberated Azerbaijani territories can now receive call signs sent from the ground-based VOR/DME navigation system. The cutting-edge technology has been introduced at the Fuzuli International Airport, one of three new airports to operate in the Karabakh region. The European Organization for the Safety of Air Navigation, known as EUROCONTROL, has registered and approved the radio signs transmitted over these lands.

The reconstruction and modernization of the civil aviation infrastructure in the Karabakh region come as part of the state-run programs. The radio technical equipment for air navigation, a radar complex, and instrumental landing system support are being installed at the Fuzuli International Airport under the standards and requirements of the International Civil Aviation Organization (ICAO). The aviation and meteorological support systems have already come online at the airfield.

Azerbaijan's Karabakh (Garabagh) region fell under Armenia’s occupation during the First Karabakh War in the early 1990s. Following the Soviet Union’s dissolution in 1991, Armenia launched a military campaign against Azerbaijan that lasted until a ceasefire deal was reached in 1994. As a result of the war, Armenia occupied 20 percent of Azerbaijan’s internationally recognized territories. Over 30,000 ethnic Azerbaijanis were killed and one million were expelled from those lands in a brutal ethnic cleansing policy carried out by Armenia.

Armenia's authorities have repeatedly attempted to use the Karabakh region’s airspace and the Khojaly airport of Azerbaijan, to host the flights of Armenian companies, as well as military flights. However, such illegal attempts faced a severe backlash from Azerbaijan, including ultimatums at international platforms.

Azerbaijan regained access to the airspace over the Karabakh region after its liberation from Armenia’s occupation last year. As a result of the 44-day-long war, the Azerbaijani army liberated over 300 settlements, including five major cities from nearly 30-year-long illegal Armenian occupation. The war ended in a tripartite ceasefire statement signed on November 10 by Armenia, Azerbaijan, and Russia. Armenia returned three more districts to Azerbaijan’s control within its obligations under the agreement.

The Azerbaijani government rolled out projects for the construction of three new airports in the post-war region. An airport with a 3,000-meter long runway in the Fuzuli district will reportedly come online on September 5, 2021, to operate its first flight.

Two more airports will be located in the districts of Zangilan and Kalbajar. The skies over the Karabakh region are internationally recognized as part of Azerbaijan’s airspace. ICAO confirms that the codes of airports located there belong to Azerbaijan. The Khojaly (Khankendi) airport, located in the territories now monitored by the Russian peacekeeping mission, does not have an international status. ICAO recognizes it as an Azerbaijani airport, stating that any flights if operated by the facility should be confirmed by Baku.