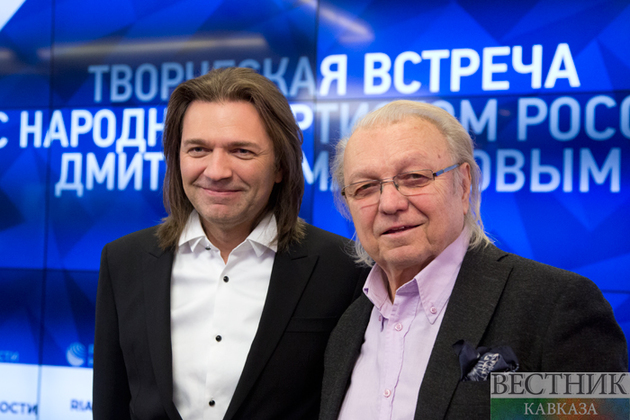 The People's Artist of Russia, composer, pianist, singer, actor, producer, people's artist of North Ossetia and Karachay-Cherkessia Dmitry Malikov celebrates his 50th anniversary today. Two years ago, he celebrated the 30th anniversary of his career, however, the singer still sells out concert halls full of young people during his tours. Dmitry Malikov wants to celebrate his  50th anniversary in all formats: today - with a family, on January 31 - a concert, and on February 1 - a birthday party.

"My friends-artists want to sing my songs as a gift. There will be a duo with Valeria - I will accompany her on the piano, and she will sing my 'You and I' song. I am also pleased that Diana Arbenina put her beautiful, interesting and wise poem to my instrumental music. I will perform my composition, and she will recite a poem. I think it will be an unusual, unexpected number. There will be a symphony orchestra on stage - about 30 people. They will join me in performing songs and especially instrumental pieces," Malikov said.

"Today I will sing songs most of the time, because I wrote a lot of them in my long life, people want to hear them, dip into different periods of my work. Of course, I will also perform instrumental songs, but I have the opportunity to perform instrumental pieces at my instrumental concerts, which are mainly held in the House of Music or other philharmonic halls. But it’s an anniversary concert, it should be fun, festive, positive, recognizable, that is, with the best possible mood, like a holiday cake," the musician believes.

"There is genetics, the environment in which I was raised, a Soviet school. I’m too gentle, maybe soft and modest, but you can't be shy in show business, because you have to push in, you have to break through everywhere, you need to be constantly noticed, then you are in the public limelight. But I tried to win the audience with my creativity, my songs, and for a long time I succeed. I think the interest in this anniversary is also due to the fact that people just love my songs, and for that I'm very grateful. Actually, this is a creative person's reason for existence: bring joy to somebody else, not only to yourself," Malikov says.

"Anniversary concerts always attract special attention. Music of the 1980-1990s is the thing now. Young people also like this sound. Experiments with young artists will continue, because we need fresh blood - producers and artists... The hard part is getting through to young people. In some way I succeed in doing this on the Internet, although they perceive me as a grown man. And that's fine. But maybe some of them will come to my concert or my performance with their parents, which is even more important because during the 'Flip The Game' performance I talk to young people about classical music, about classical culture."

Grand pianos, flutes and button accordions to be sent to art schools in Stavropol

Sahib Pashazade: "We are especially happy that we represent mugham after the war"