Egypt's Suez Canal: Why does its closure matter? 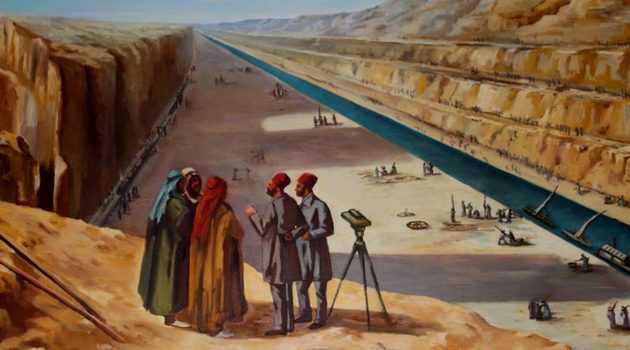 The Suez Canal has played a major role in world affairs for many decades now. Ownership of the canal has been an important symbol of sovereignty for Egyptians since it was first nationalised by President Gamal Abdel Nasser in 1956, while the failed war by the British and French to retake it is considered a benchmark in those countries' imperial decline. Closure of the canal, whether intentional or otherwise, can have serious economic repercussions, blocking off the quickest shipping route between the Mediterranean Sea and the Indian Ocean.

The news on Tuesday evening that a massive container ship had run aground in the canal, blocking it to traffic, has again reminded the world of the importance of the waterway for international trade. Middle East Eye takes a look at the history of the Suez Canal and why it is has been so fought over for 150 years.

What is the Suez Canal?

The Suez Canal was constructed by the Suez Canal Company between 1859 and 1869. The company, which was initially primarily owned by French private investors, operated the company until 1956, after which it was nationalised by Egypt.

Has it been closed before?

The canal has been intentionally closed a number of times, most notably in 1956 and in 1967. Both instances were ordered by then-President Nasser in response to foreign aggression. In 1956, it was in response to the British, French and Israeli military operation launched against Egypt in the wake of the canal's nationalisation. Initially closed only to Israeli shipping in July, it was then fully closed in October, sparking spiralling inflation on a number of goods in western Europe. It was reopened in April 1957 after the failure of the assault on Egypt.

The next closure was much longer-lasting. Following the war with Israel in 1967 and the country's occupation of Sinai, the canal remained closed until 1975, when a diplomatic agreement between the two countries was signed, calling for Israel to withdraw from the peninsula. Fifteen cargo ships known as the "Yellow Fleet" were trapped in the canal as a result of the closure and would remain there until it opened again. There have been a number of accidental groundings in the canal before. The waterway was closed for three days in 2004 after a Russian oil tanker ran aground, the first time in 30 years that passage had been shut down. Several ships also ran aground in 2016 and 2017, though all were pulled free within a few hours of the incidents.

Why does the closure matter?

Although initially the route was used for a variety of goods, it became a crucial transit point for the transport of oil in the 20th century, and today the canal is thought to provide passage for 10 percent of all international maritime trade. In response to the blockage, international crude prices were up more than 2 percent in early London trading, according to the Wall Street Journal. Egypt's economy also earns billions from the canal each year - it earned $5.61bn in revenues from the canal in 2020. In 2015, under President Abdel Fattah el-Sisi's direction, a new lane was dug along a section of the canal as part of an $8bn renovation project. The blockage is the last thing the country needs as it struggles to cope with an economic downturn exacerbated by the Covid-19 pandemic.