Exhibition "Seven Beauties" was presented at the State Russian Museum in St. Petersburg 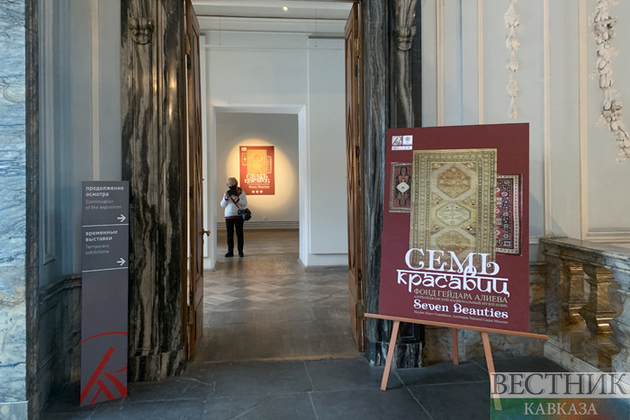 On Wednesday, January 26, the opening of the exhibition "Seven Beauties" took place at the Russian Museum in St. Petersburg. It is organized by the Heydar Aliyev Foundation, the Azerbaijani Embassy in Russia, the Ministry of Culture of Azerbaijan, the Azerbaijan National Carpet Museum.

The exhibition "Seven Beauties" is dedicated to the 880th anniversary of the outstanding Azerbaijani poet and philosopher Nizami Ganjavi. In the halls of the Marble Palace, different types of art and several historical eras are presented, united by the images of his immortal poetry.

One can visit the exhibition from January 27 to May 9. 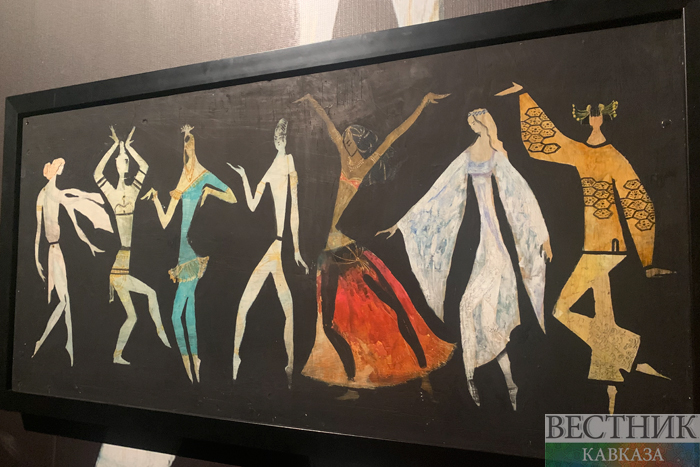 At the presentation of the exhibition, Ambassador Extraordinary and Plenipotentiary of Azerbaijan to the Russian Federation Polad Bulbul oglu admitted that he was delighted with its exhibits. "I was always amazed by such creations of human hands, because at first all this beauty must be invented and then realized. There were people who did it wonderfully, and this beauty has survived to this day - just like the amazing poetry of Nizami, an outstanding person, philosopher and a theologian who, through the centuries, continues to unite countries and continents", he said.

"Probably, many of those present here know that in the capital of the Russian Federation, in Moscow, there is a monument to Nizami. Also in the northern capital, in one of the most sculptural cities in the world, a monument to the great Azerbaijani poet has been erected, for which we are very grateful to the Russian side. This the foundation on which the relationship between our peoples is based", said Polad Bulbul oglu.

"I would like to sincerely thank the Heydar Aliyev Foundation, which is doing a great job. Everything that the foundation does is done at a very high artistic and organizational level. I would also like to thank the management of the State Russian Museum and our Carpet Museum, which made a simply wonderful exhibition. According to all the highest international parameters, it is possible to consider that this exhibition represents both the image of Nizami and the present level of Azerbaijan with great dignity. I want to wish health to all those present", the Azerbaijani ambassador concluded. 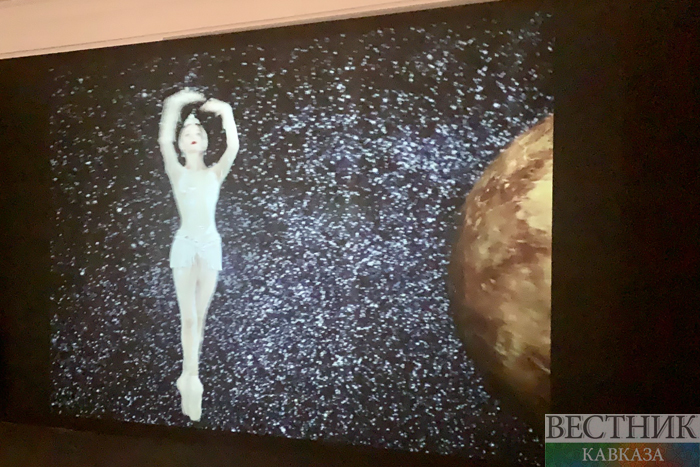 Aide to the President of Azerbaijan Anar Alakbarov noted that Azerbaijan and Russia have a long tradition of friendship, brotherhood and good-neighbourliness: "Every year we try to strengthen our relations. Leaders, heads of our states, by their example, strengthen our interaction in all spheres, including humanitarian ones. We are grateful to the State Russian Museum, because we had been trying to implement this project for a long time, but we had to postpone it due to the pandemic. Now we are happy that the Heydar Aliyev Foundation is presenting the exhibition “Seven Beauties” in the Russian Museum with specialists from the Russian side".

At the same time, Alakbarov focused on the fact that one of the first representative offices of the Heydar Aliyev Foundation was created in the Russian Federation: "A huge number of projects have already been implemented in the field of education, healthcare, ecology, but the lion's share of projects is, of course, culture. We have been holding exhibitions, events, conferences, musical evenings, concerts for many years. And we receive huge support from the Russian public. This year we are celebrating the 30th anniversary of the establishment of diplomatic relations between Russia and Azerbaijan, so in the near future we will sign special agreements on holding a number of events. The action plan has already been approved.

Speaking directly about the exhibition, Anar Alakbarov said that it must be seen and felt. At the same time, he noted that the delegation from Azerbaijan has been in St. Petersburg for two days already: “Yesterday we laid the foundation of the monument to the great Azerbaijani composer Uzeyir Hajibeyov. I am sure that this cooperation will continue. I hope that we will continue to implement such projects in the future.” "Taking the opportunity, I would like to invite everyone to Azerbaijan". 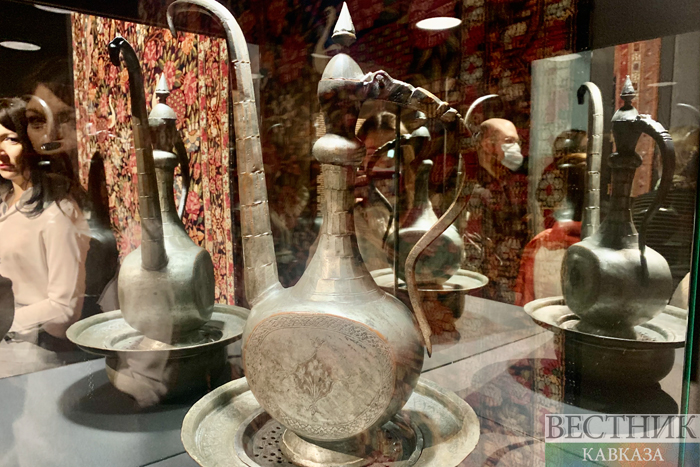 Shirin Melikova, director of the Azerbaijani National Carpet Museum, spoke about the exhibition in an interview with a Vestnik Kavkaza correspondent. "This is a unique exhibition project that brings together our literary heritage, musical and theatrical art, contemporary art and presents masterpieces of national arts and crafts from the collection of the world's first carpet museum - the Azerbaijan National Carpet Museum", she said.

"The project multifacetedly immerses the viewer in the world of one of the masterpieces of oriental poetry, Nizami Ganjavi's poem "Seven Beauties". At the exhibition, the narrative canvas leads the viewer through the objects of applied art to the knowledge of all facets of the meanings of this poem and immersion in its enchanting mysticism. She offers to walk the path, like the path of the hero of the poem, from darkness to light," said Shirin Melikova. 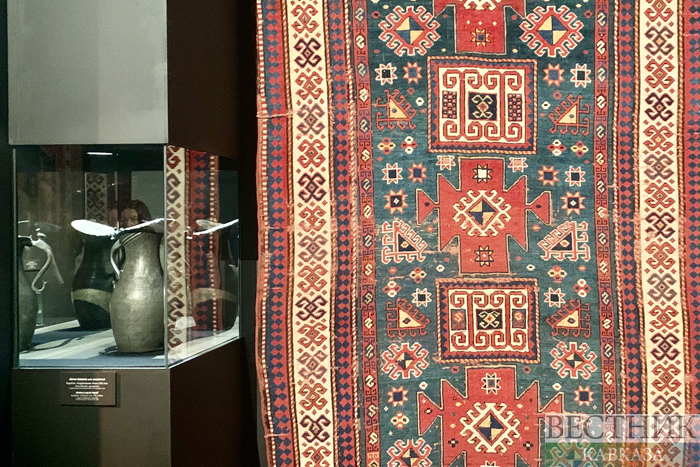 Grigory Goldovsky, Head of the Department of Painting of the 18th - 1st half of the 19th centuries of the State Russian Museum, also spoke about the exhibition. "This is a diverse exhibition: works of applied art, video installations, wonderful, absolutely rare miniatures, wedding decorations, and so on. It shows the authentic diversity of oriental culture, which testifies to the era and features of Nizami Ganjavi's work", he said.

"I believe that this is one of the most significant exhibitions. It is wonderful that this is a synthetic exhibition, where works of old and new art are combined, including new-woven carpets in the traditional silk carpet weaving technique, there are memorial items such as a helmet, a shield and a sword, there are old codes. The exhibition also gives access to the new Azerbaijani art: the ballet of the famous composer, classic of Azerbaijani music Qara Qaraev "Seven Beauties" is presented," Grigory Goldovsky noted. 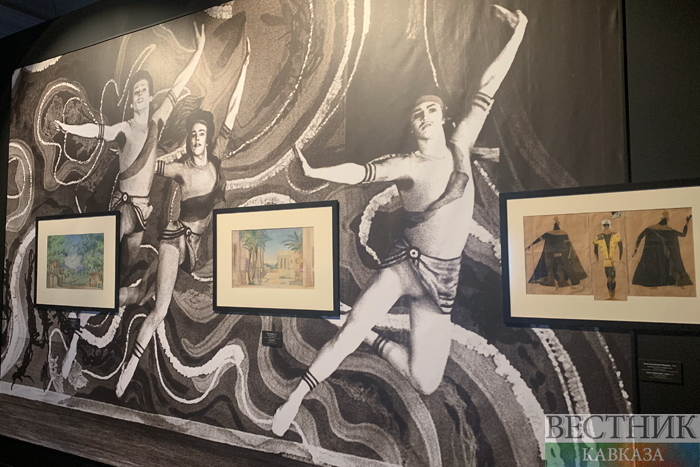 The curator of the exhibition, Emin Mammadov, told Vestnik Kavkaza that Azerbaijan was supposed to be a guest country at the St. Petersburg Cultural Forum, and the exhibition was supposed to be held within the framework of this forum. Due to the pandemic, the Forum was canceled, but the exhibition was still opened. "We have long been linked by friendly relations with the State Russian Museum. In 2016, the Heydar Aliyev Foundation opened an exhibition of the famous Azerbaijani artist Rasim Babayev here. Since then, our friendship has been established. Cultural ties unite countries most closely. The more such cultural exchanges, exhibitions, concerts festivals, the more our friendship will grow stronger. Now we are discussing joint projects with the Russian Museum in Baku. We are working with many Russian museums and exhibiting Russian art in Azerbaijan, and Azerbaijani art in the Russian Federation," the exhibition curator said.

As for the structure of the exhibition "Seven Beauties", Emin Mammadov drew attention to the following: "We tried to tell not just about Nizami's poetry, but to connect XII century with XXI century. We open the exhibition with a shadow installation by conceptualist Rashad Alekperov, who made installations based on shadows from the armature, where we see a young man reading - this is one of the plots of the famous miniature. 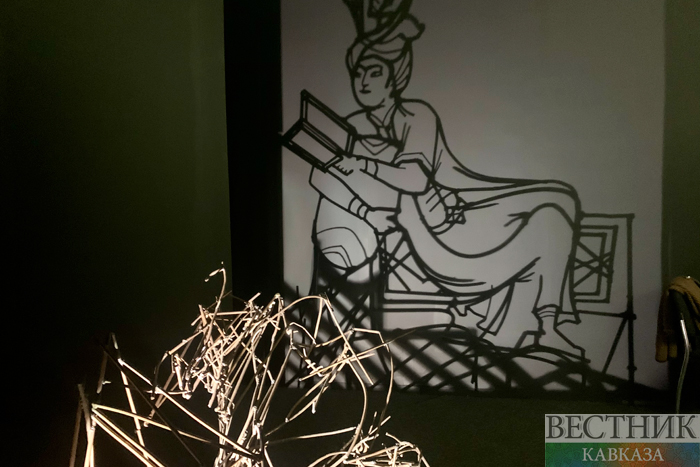 In the same way, talking about each of the halls of beauties, we took seven well-known miniatures, the characters of which seemed to come to life. Then you see incredibly beautiful carpets... And we end the exhibition with the famous ballet of Qara Qaraev, an outstanding Azerbaijani composer, a student of Shostakovich and Uzeyir Hajibeyov, where you can just sit down, relax and watch the ballet". 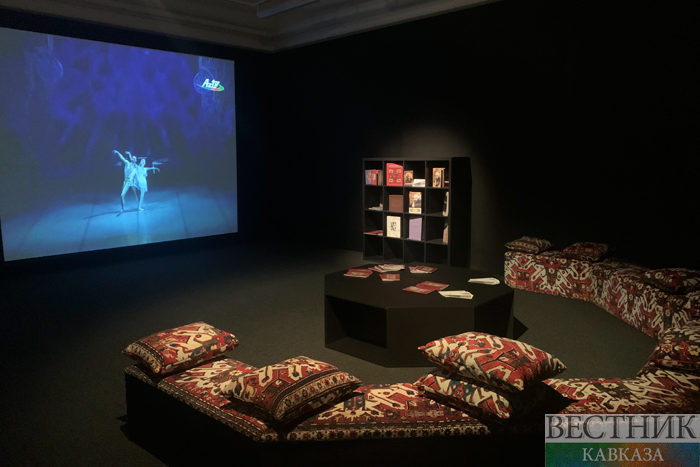 The scientific secretary of the State Russian Museum Alexandra Polyanovskaya expressed confidence that the exhibition would make a good impression on visitors. “For women, there are incredibly beautiful jewelry, carpets and ornaments. Men, of course, will like daggers and military attributes. Everyone will find something for themselves”, she said.

"The exhibition will be interesting for everyone, including children. Thanks to the Heydar Aliyev Foundation, a lot of multimedia technologies are involved, this is a modern exhibition, despite the fact that very old things are exhibited," Alexandra Polyanovskaya added. 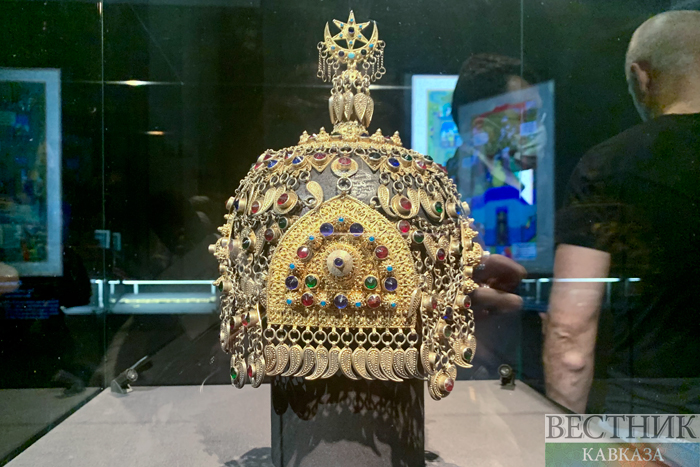 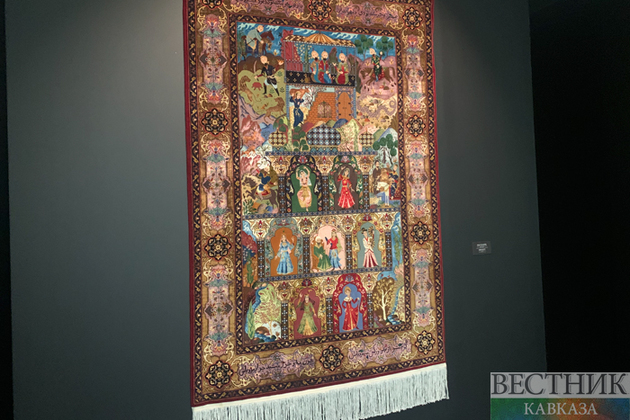 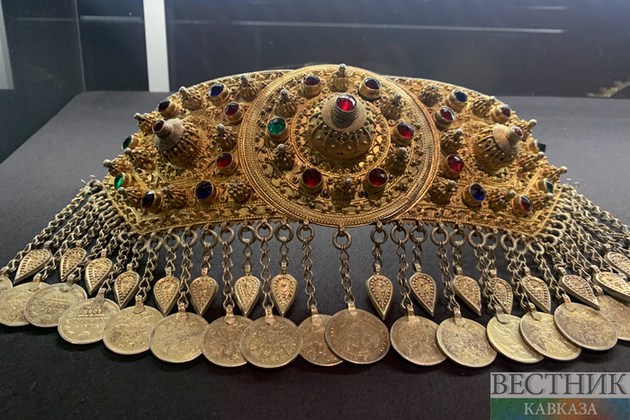 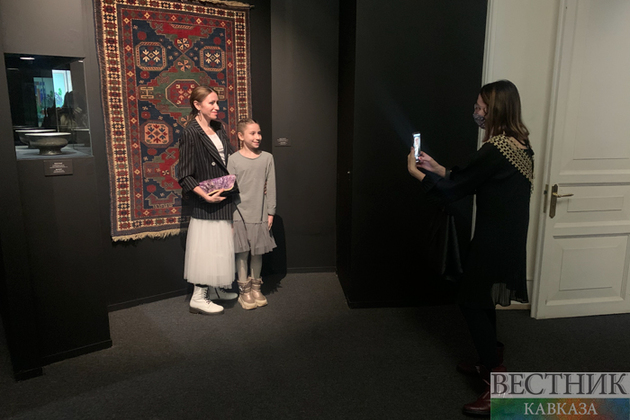 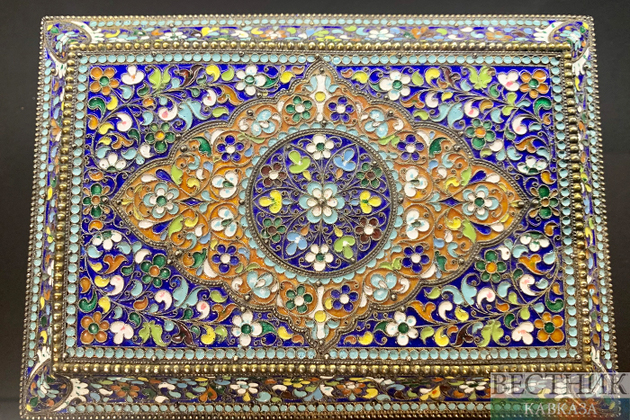 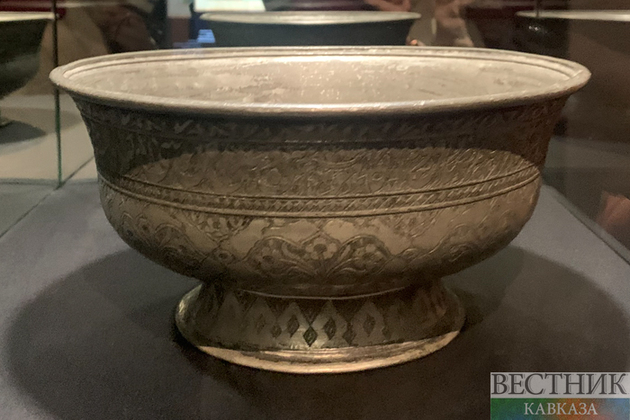 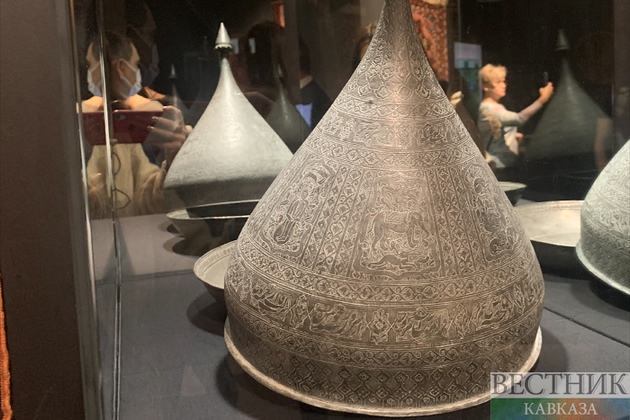 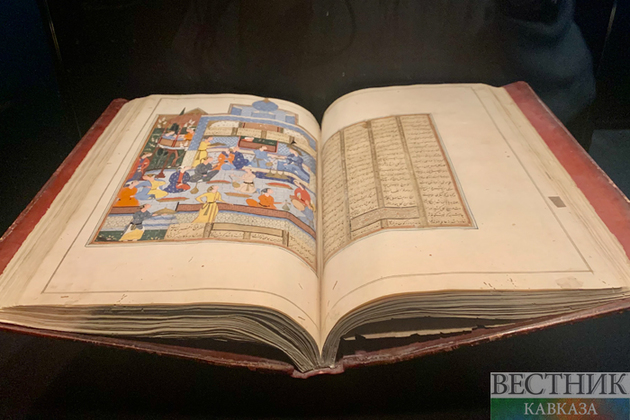