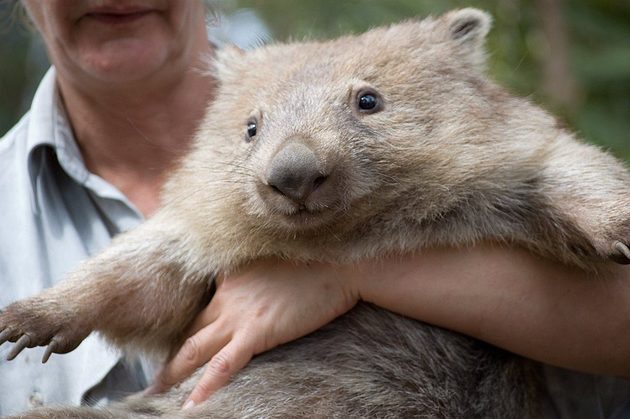 These accidental heroes have been burrowing into an underground pool of water located on a beef farm southwest of Merriwa, New South Wales, ABC News reported. In the process, they have opened up the water hole for other species to enjoy. Newsweek reports in its article 'HERO' WOMBATS ARE SAVING OTHER ANIMALS FROM DROUGHT BY DIGGING CRATERS that in this instance, the wombats apparently took on the role of environmental engineers, expanding a hole on Ted Finnie's farm. According to Finnie's estimates, the hole—which looks more like a "crater"—is now around 20 meters (65.6 feet) in diameter and four meters deep.

Finnie told the news outlet a recently erected camera trap captured birds, goannas, possums, echidnas and emus drinking at the water hole. While wombats, kangaroos, wallabies and wallaroos were already frequent visitors to the well, the wombats' construction work appears to have encouraged new guests to the area.

Associate Professor Julie Old, a biologist at Western Sydney University, told ABC News: "It's almost like the wombats are water diviners, they're finding the water and digging the holes to get to the water and the other animals are taking advantage of it." Old has visited the hole and called it unique. She said she is unaware of any other incidents of wombats digging for water in this way.

This is not the first time wombats have attracted attention for their "heroism." Earlier this year, a tweet claiming wombats were saving local wildlife by "herding" fleeing animals into their burrows went viral.

It read: "Apparently wombats in fire affected areas are not only allowing other animals to take shelter in their deep, fire-resistant burrows but are actively herding fleeing animals into them."

However, this good news story was not quite as accurate as it appeared. Experts chimed in to dispel the rumor, saying animals hiding from the fires in wombat burrows were uninvited guests. "I wouldn't say that wombats are "happy" about sharing with other animals, but they will "tolerate" them as long as they don't disturb the wombat too much," Dr. Michael Swinbourne, an ecologist at the University of Adelaide, told AFP.

Wombats are generally solitary creatures but may share spaces with close relatives. In the past, they have been seen with other species, including reptiles, rodents, echidnas and koalas. "We have images of penguins sheltering in a wombat burrow to escape the attention of a sea eagle," said Swinbourne.

The severe fire season is thought to have killed more than 1 billion of Australia's unique fauna, as well as at least 33 people. The country may be about to see some relief from the flames as heavy rains hit the east coast, putting out around a third of fires in the state of New South Wales, the BBC reported.

Fire officials and politicians have expressed relief at the change of weather, which brings much-needed water to regions of the country that have spent the last three years in drought. However, they expect hot, dry conditions to return before the fire season is out.

Inhabitants of Japan attacked by dolphins