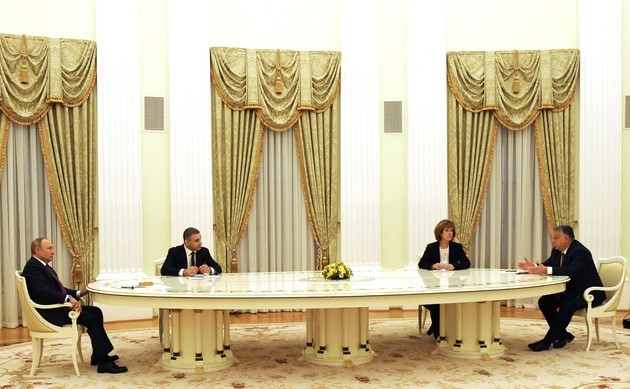 Hungary is sticking with its Russian gas import agreement and does not plan to cancel the expansion its Paks nuclear power plant, a 12.5 billion euro ($13.84 billion) deal with Russia's Rosatom, Foreign Minister Peter Szijjarto said on Wednesday. Reuters reports that surging inflation, a freeze in European Union recovery funding and the fallout from the Russia-Ukraine conflict have complicated nationalist Prime Minister Viktor Orban's path to re-election after 12 years in power.

For the first time since a 2010 landslide, the 58-year-old Orban will on April 3 face a united front of opposition parties, which called on his government on Tuesday to scrap the nuclear deal awarded to Rosatom without a tender in 2014.

Budapest wants to expand the 2-gigawatt plant, which accounts for about half of Hungary's electricity output, with two Russian-made VVER reactors, each with a capacity of 1.2 gigawatts in a deal financed mostly with a Russian loan.

"It is astonishing that there are politicians on the left, who are calling for the construction of the nuclear plant to be stopped," Szijjarto told a news conference. "If the nuclear plant is not built, we will have to face a brutal increase in energy costs," he said. "We cannot let the Hungarian people pay the price of the war raging over the border."

Faced with a surge in inflation to its highest levels in almost 15 years, Orban has cut the prices of fuel, some basic foods and mortgages in the run-up to the vote, extending a cap already in place on household energy bills.

Szijjarto also said Hungary could not cut off gas imports from Russia, with which it signed a new long-term agreement last year to import 4.5 billion cubic metres of natural gas per year on routes avoiding neighbouring Ukraine.

Last month Orban visited Russian President Vladimir Putin, seeking an extension of the import deal by 1 billion cubic metres per year. "As we are doing our utmost to maintain European unity, we are likewise doing our utmost to ensure that Hungarians should not pay the price of this war," Szijjarto said.

He said the closure of the Hungarian unit of Russian Sberbank was an example of European sanctions also hitting the Hungarian economy. The Hungarian central bank said the local Sberbank unit had about 1% market share.