The chairman of the Youth and Sports Committee, Fuad Muradov, arrived on a friendly visit to Israel. The main purpose of the visit is to participate in today's special meeting of the Knesset Immigration and Absorption Committee, dedicated to the achievements of Azerbaijani immigrants to Israel, as well as the 25th anniversary of the establishment of diplomatic relations between Israel and Azerbaijan.

Yesterday, Muradov met with a deputy of the Jerusalem City Council, Marina Kontseva, to discuss projects on joint work with young people, as well as options for exchanging cultural delegations, for example, the Baku tour of the Jerusalem Ballet and the Jerusalem tour of one of the leading Azerbaijan's classical dance groups. Another theme was the topic of twin cities. Since this issue is connected with a number of certain complexities for the Israeli capital, it was decided to work out opportunities for twinning between the regions of the capitals of Israel and Azerbaijan. The meeting was attended by the general director of the international association Israel-Azerbaijan 'AzIz', Lev Spivak, and the head of the Jerusalem office of AzIz, Alexander Agranovsky. 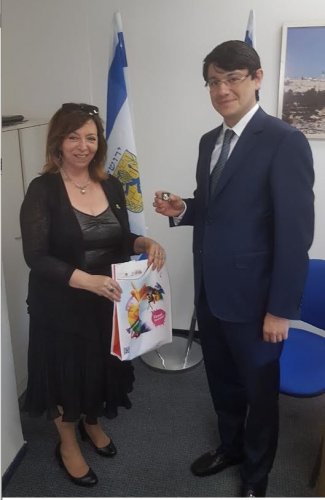