Post-conflict challenges in the South Caucasus discussed in Brussels 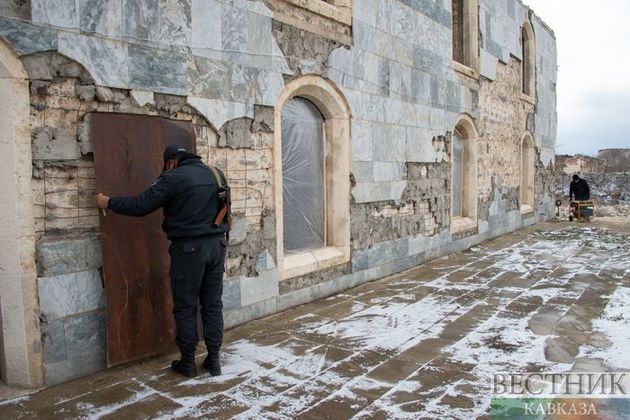 This week a conference “Post-conflict challenges in the South Caucasus region” was held at the Brussels Press Club, during which photographs of both past and present years were shown. The  participants of the conference (which took place both online and offline) came to the unanimous opinion that the main problem today is the huge number of mines that threaten the life of the local population.

EUreporter says that Sajjad Karim, a former UK Tory MEP, after visiting the liberated territories, he saw with his own eyes that towns and villages had been neglected for many years, human settlements have been run into the ground. "It was a great shame this has happened. Places of religious and historic interest have fallen into ruin and there is clear evidence of deliberate wrong doing. On a positive note I also witnessed a huge amount of capital structural development underway. I have never seen anything to compare with the extent of this.This presents a real opportunity for the entire South Caucasus   to come together and ensure that life opportunities for everyone in the region area greatly improved by this changing dynamic.This is a tremendous vision, particularly in today’s world with rising nationalism and populism. I hope this will rise out of an area that has suffered so much for decades because of religious and identity-based politics. I believe that we can now see a real force for good emerging” said Sajjad Karim, adding that the aim for everyone should be to bring people together in the region to ensure a peceful future for this region.

Former Romanian MEP and the former foreign affairs minister Ramona Manescu considered events in Karabakh a real tragedy. “I have worked in the parliament to bring sides together to discuss their problems but through dialogue which is the only way to bring peace.  I hope the region that has known so much hate and war can be stabilised and finally see peace. If there was ethnic cleansing there should not be any more.  There are economic, human and environmental challenges which are so big that all sides have to get involved to get help and support. Azerbaijan needs support on this, for instance rebuilding the infrastructure. It cannot do it without international support".

Another speaker, Ramil Azizov, of ANAMA, said: “Much of this land has been under occupation for over 30 years and a lot of it has been completing destroyed.  Many people have been injured by the mines left by the former forces in the region. It is essential they are allowed to return to their homes safely.

Fuad Huseynov, State Committee for Refugees and IDPs, or internally displaced persons said: “As a country, Azerbaijan hosts one of the highest number of refugees in the world and faces a huge arms of IDPs, people who have been displaced from their homes in NK. It is estimated that a total of 1m people are considered displaced: it's more than 10 percent of the population.Today, 115 new residential complexes have been erected for IDPs and 315,000 IDPs have been given housing. As a result, the poverty level for IDPs has dropped from 75  per cent to less than 10 per cent over the last 25 years which is substantial.This is a model for other countries who might be dealing with IDPs. The job now is the full restoration of liberated areas and return of IDPs to their homes in a safe and dignified manner. Fuad Huseinov said the area is said to be one of most mine polluted areas in the world and that Armenia had refused to hand over land mine maps. He believes that with the concerted efforts of the international community Azerbaijan will be able to present a new model of post conflict zones in the coming years, though at present the international community is turning a blind eye to what has happened in NK.

Leyla Gasimova, an Azerbaijan national who hosted the 2 hour seminar, said: “I have spent several years in peacebuilding activities and in trying to find a solution to the NK dispute. But people must know that peace cannot be achieved while land is under occupation. Azerbaijan has liberated its land but we still face many challenges to maintain stability and peace in the region and the liberated zones. Displaced Azerbaijani people cannot currently return to their homes due to mine pollution.These challenges, including other serious environmental issues, remain and we cannot apply confidence building measures.The aim of this event is to find common solutions to these challenges and enhance cross border cooperation through the engagement of third parties. Confidence building is needed to restore trust, including providing land mine maps, to protect both civilians and the environment.”

Swedish artist and photographer Peter Johansson, who presented a photo exhibition at the press club on the region, explained the reasons that attracted him to Azerbaijan: "I was very curious about Azerbaijan and that is why me and my wife visited liberated areas around Nagorno Karabakh. We try to show the reconstruction work of the area currently underway . Unfortunately, many of the buildings are so badly damaged they cannot be restored and this is very sad and tragic. I am glad to say that Sweden, my country, has supported humanitarian work in the conflict areas and finding a sustainable peace between the parties".

Summing up, Karim said, the expo provided a real life account of the challenges - and opportunities – that face the region. “There is real potential in peace, not conflict in NK. This is the time for the EU to engage to win the peace and move the region forward ”