As the deputy chairman of the board of the Kazakh Humanitarian Law University, Miras Daulenov, said, summing up the results of the meeting during the video conference between Yerevan, Moscow, Astana, Bishkek and Minsk titled 'The interaction within the framework of the Eurasian Economic Union', the Council does not fulfill its functions.

"If you look at the treaty [on the establishment of the EEU], it determines there that the Council, in cooperation with the Supreme Council, can overrule the decisions of the Eurasian Commission. The Council has the primary responsibility for what is happening in our region. During such meetings it is important not only to sum up and raise problems, but to make concrete decisions about what needs to be done," the expert said. 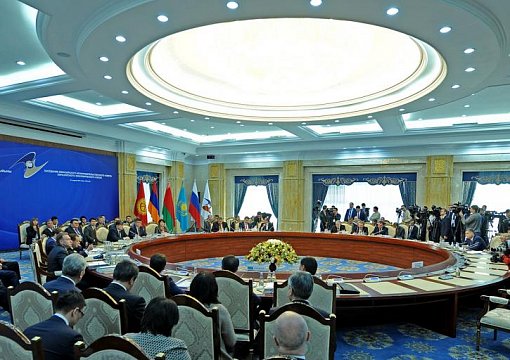 According to him, the EEU countries need to form a liberal domestic trade market: "There are very serious restrictions not only in trade in services, but also in trade in goods. However, it is the trade in goods that is considered the main link in any general market of any association. And we still have such limitations, although we have created an integration to bring together not just legal systems, but also economies. The tasks of the EEU will not be fulfilled if such restrictions continue to exist."

Miras Daulenov noted that the sanctions imposed on Russia by Western countries affect other EEU countries as well, creating a threat to integration itself.

He also called on to amend the activities of the Eurasian Economic Commission (EEC): "Earlier, the EEU court had the power to review the commission's claims to the states, in case of their non-fulfillment of contracts or imposition of any excessive restrictions. And now the EEU court does not have such an opportunity. In fact, a certain platform was created, which is a forum where there are political agreements, but these agreements are not filled with concrete practical content."

The Director of the Institute of Strategic Planning and Forecasting, chief researcher at the Sociology Institute of the RAS, Alexander Gusev, also sees the presence of an external factor in the problems of the EEU: "Russia stands on the priority of integration in the post-Soviet space. We are building a position in relation to all members of the EEU, on the basis of both bilateral and multilateral relations. Meanwhile, the changed political situation in the West in connection with the presidential elections in the US is posing even more difficult challenges for us. The administration of Donald Trump will not soften its position with regard to our country and the EEU. There will be no improvements in the US-Russian relations in the near future. This will also indirectly affect our relations within the framework of the EEU. The environment that surrounds Russia is aggressive. In this situation, we can solve our common problems only through joint efforts. "