Egypt: the crisis is worsening 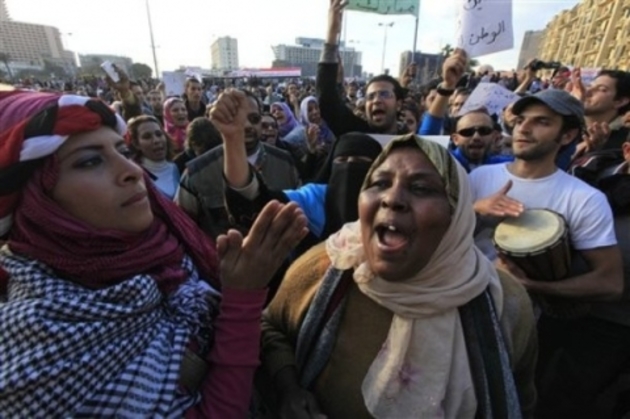 Riots in Egypt in which dozens of people were killed in recent days have pulled the country into chaos. Thousands of rioters continue demanding the resignation of the president and the overthrow of the Muslim Brotherhood’s power. President Muhammad Mursi urged the opposition to start a national dialogue to find a way out of the current situation, but they rejected the initiative. Russian experts give their own appraisal of the situation in Egypt.

Boris Dolgov, expert of the Oriental Studies Institute
Muhammed Mursi was proclaimed President on June 30, 2012, but he beat his opponent Ahmed Shafik only by 4 or 5%. Therefore, almost half of Egyptian citizens voted for Mursi and another half voted for Ahmed Shafik. Ahmed Shafik represents the forces which want the secular development of Egypt, while Muhammed Mursi was the leader of the Muslim Brotherhood. Egyptian society divided into those who support the Muslim Brothers’ path of development and those who would like to see Egypt as a secular state.

However, there are peculiarities: the Muslim Brotherhood is a party of moderate Islamists, and they propose an interesting program of development for Egypt. The Muslim Brotherhood and Mursi are connected with the international economy, first of all the USA. Mursi studied and lived in America; his two sons are citizens of the USA. Heirat ash-Shatr – the grey eminence of the Muslim Brotherhood – is a millionaire, well-known economist and industrial businessman. According to some resources, Mursi contacts him to provide the economic policy of Egypt.

When Mursi was elected, he stated that he would be President of all Egyptians. It seems this didn’t happen, because the situation in the government and the top state positions confirm that Mursi relies on his supporters – the Muslim Brotherhood. This factor destabilizes the situation in society as well.

A project of a new constitution was proposed in Egypt. It had a pro-Islamist character. There are political forces which stand against the current constitution, despite the fact it was adopted in a referendum.

Mursi took over the duties of all power branches – executive, legislative and judicial – ahead of the parliamentary elections, which became a destabilizing factor too: Mursi’s opponents were not satisfied with a situation in which he became “a new pharaoh”, as they called him, and in fact his power was greater than Mubarak’s. This caused protests, clashes with law-enforcement agencies; people were killed. Mursi repealed his first declaration, but published another one which confirmed the situation: Mursi is the sole master of Egypt. Of course, this provokes dissatisfaction among Mursi’s opponents. More than 50 political parties are registered in Egypt, under Mubarak there were only 20 parties. This diversity doesn’t contribute to making the right choice of development for Egypt.

Alexander Vavilov, professor of the MSUIA
Speaking about the economic situation in Egypt, I would like to remind you that one of the Egyptian economy ministers burst into tears, speaking about the economic situation in the country – it was so disastrous. Egypt’s problems cannot be solved quickly. The country’s population is almost 100 million. When I began to deal with Arab countries 40 years ago, only 30 million people lived in Egypt. The country subsists on a territory which is 5.6% of the whole of Egypt. This narrow strip on the banks of the Nile is the main granary. Almost 50% of grain is imported. How can the problem be solved? When Mubarak was leaving, there was $37 billion in the budget, at the moment there is only $10 billion. Even tourism doesn’t contribute to it – what European would visit a country where his travel is restricted? Egypt will face a period of long-lasting instability. Today it has no force which could consolidate the majority of the population.


Vladimir Yevseyev, head of the Socio-Political Studies Center
Remembering Mubarak’s leaving, I would like to say that if the army didn’t take a neutral position, Mubarak wouldn’t have left. Military men said that power should change. And power was given to the military structure, but it was not a dictatorship. In the transition period from February 2011 to July 2012, to electing a new president, the military structures did a lot. They could calm the protests of certain parts of society, which appeared from time to time. Conflicts didn’t escalate. They managed to make amendments to the constitution that didn’t dissatisfy the population, like the amendments launched in December when the country actually divided into two hostile sides because of the constitution. The military structures took a reasonable position on issues which were of interest to the West – the Camp David Accords and maintenance of partnership with the USA. They established foundations which could be implemented positively, as international structures and certain states wanted to allocate significant financial resources to Egypt. In general the situation was not so bad, but when the new authorities came to power in July 2012, they began to shake the boat.

I am concerned about some processes of Islamization in the army at the bottom level. The current authorities are interested in it. At the moment these process are not catastrophic. The military still call for dialogue. At the same time, I cannot see a person who could organize a military takeover, lead the country. It is unclear where to lead it and who will do it. But the potential of the military is not exhausted. A hope for preventing chaos exists while the military force has its own point of view.

Along with the military there are very powerful forces which are not interested in destabilization of Egypt. Nobody wants Egypt’s collapse. First of all it is not beneficial for the West and the USA. Even though providing financial support to Egypt was delayed, this process wouldn’t stop completely, as the West is interested in supporting a certain level of stability in Egypt.