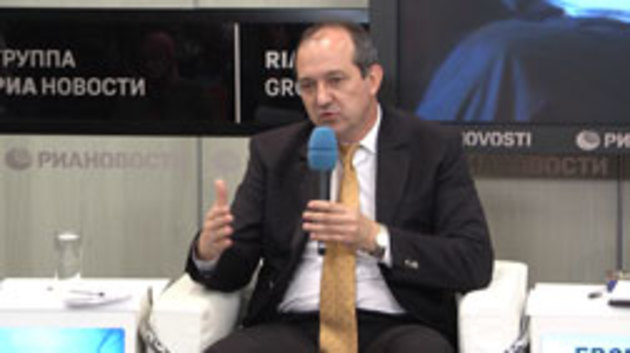 On June 20 the fifth round of talks between the six mediators (the U.S., Russia, Britain, Germany, France, China) and Iran ended. As a result of this phase of negotiations the parties were able to achieve certain progress in the development of the text of an agreement, which is expected to be written by July 20, 2014. The head of the Caucasus Institute of CIS countries, Vladimir Yevseev, has talked about the interests of the parties and non-obvious aspects of the negotiations.

Speaking about the objectives of the negotiators, Vladimir Yevseyev said: "We have a document that should be based on the joint action plan from November 24, 2013. I can assure you that the new document will not be based on the joint action plan. I will explain why. The core of the joint action plan, as you know, was an additional protocol to the 1997 IAEA agreement on direct safeguards. Going back to the source, it was written that the Islamic Republic of Iran was going to ratify the protocol which was to become the core of the joint action plan adopted in November last year. Why was this plan changed? There is a mutual interest here. It is clear that the U.S. cannot pass any document through Congress. From this perspective, any proposal introduced by Barack Obama will cause fierce criticism in Congress. And after by-elections to Congress scheduled for November this year, Barack Obama's position in Congress will become even weaker. Therefore, it is important for Barack Obama to sign an agreement that will not have to be ratified. From this point of view, it was important for him to offer something will not impose a great number of formal obligations on the U.S., but at the same time will create the impression of an on-going negotiation process. What is important for the Islamic Republic of Iran, and specifically for President Hassan Rouhani? It is very important to have a success, but the success has to be formal. Because if Hassan Rouhani delays adopting a decision regarding this problem from a formal point of view, the pressure on him in the country will only grow. It could pose great problems for him, especially given the fact that the economic situation in Iran has not improved significantly and that certain obligations that Hassan Rouhani took over have not been fulfilled. From this point of view it is very important to have a successful foreign policy, even formally. Therefore, the United States and Iran are willing to sign an agreement, but in this case both parties are interested in not having an essential agreement."

Commenting on the future of sanctions against Iran, the expert said, "Why does the United States behave itself like that? As I have said, Barack Obama cannot push any bill through Congress that has anything to do with Iran. As you know, many sanctions have been imposed against Iran by Congress. From this perspective, Obama can suspend the sanctions (and not all of them) for a limited period of time, for example for a year. Secondly, if the U.S. eliminates sanctions against Iran, how will they control Iran? Therefore, the most logical solution for the U.S. is to postpone the lifting of sanctions for as long as possible. Iranian assets are being unfrozen to the amount of $400 million per month. One can say it is a lot, but if you count all the money in the U.S. banks which has been there since the Islamic Revolution, you'll get $100 billion. If compared with $100 billion, it is not a lot, especially given that there is no talk about this money yet. Yes, indeed, it is possible to suspend sanctions, but not all of them, because objectively America does not need to suspend the sanctions. What can the U.S. do in this situation? It can ignore the fact that there will be no protocol in the document it is about to sign. You might ask, why is this important here? There is no protocol, not a big deal. But let's look at what an additional protocol provides. The additional protocol to the 1997 agreement with the IAEA allowed to detect undeclared activities in a country. If Iran declares any facilities, carries work out on them and reports its work to the IAEA, the IAEA is the organization that checks whether the work is conducted legally. And if there is a facility which causes suspicions of being used for military-applied research in the nuclear field, then, as you understand, this facility is investigated by the IAEA under the additional protocol."
3690 views
Поделиться:
Print: