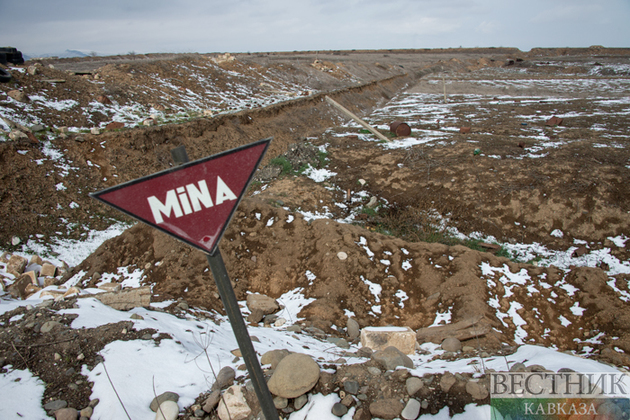 Initial acquaintance with the minefield maps provided by Armenia gives the impression of their inaccuracy, Chairman of the Board of the Mine Action Agency of Azerbaijan (ANAMA) Vugar Suleymanov said.

According to Suleymanov, last week the Armenian side handed over to the Azerbaijani side the forms for maps of minefields in the rest of the liberated territories of Azerbaijan.

"The minefield forms usually indicate the coordinates of the terrain, the types of mines installed, their number, the distance between them, information on the order of location, and camouflage. However, the first acquaintance with the maps of minefields creates the impression that they are invalid, unusable, and inaccurate," he said.

The head of the agency said that the Armenian side claims that it handed over the forms covering all minefields in order to evade responsibility in the framework of relevant international court cases. "But we have serious doubts that the forms submitted by the Armenian side fully reflect the situation with mines in all the liberated territories," Suleymanov said.

He added that the Mine Action Agency and the Ministry of Defense of Azerbaijan are already analyzing and processing the forms. "After that, the data will be transferred to maps and checked for consistency and accuracy," he said.

It is noted that the accuracy of the data previously provided by Armenia on minefields in Aghdam, Fuzuli, and Zangilan districts amounted to 25%. After a comprehensive analysis of the forms, the public will be additionally informed about how accurate they are and what areas they cover.