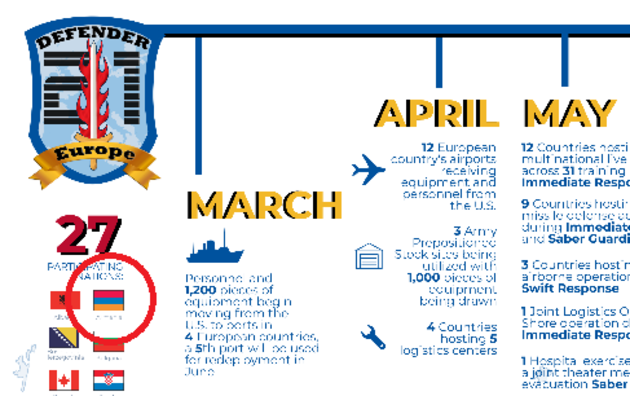 Armenia's Armed Forces will take part in the large-scale U.S.-Army led DEFENDER-Europe 21 military exercises, which will be held in spring-summer, according to the United States Army Europe and Africa official homepage.
Georgia will also take part in the exercises.

The DEFENDER-Europe 21 is designed to build strategic and operational readiness and interoperability between US, NATO allies and partners.

The military exercises will be held with more than 30,000 troops from 27 nations taking part. Defender Europe 2021 will include "nearly simultaneous operations across more than 30 training areas" in 14 countries. This year’s wider-ranging exercise will include COVID restrictions and monitoring but will span the Balkans and the Black Sea region.

"DEFENDER-Europe 21 provides us the best opportunity to hone our abilities alongside our allies and partners in the strategically important Balkans and Black Sea region so that collectively, we are ready to respond to any crisis that may arise," US Army Europe and Africa commanding general, Gen. Christopher Cavoli said.