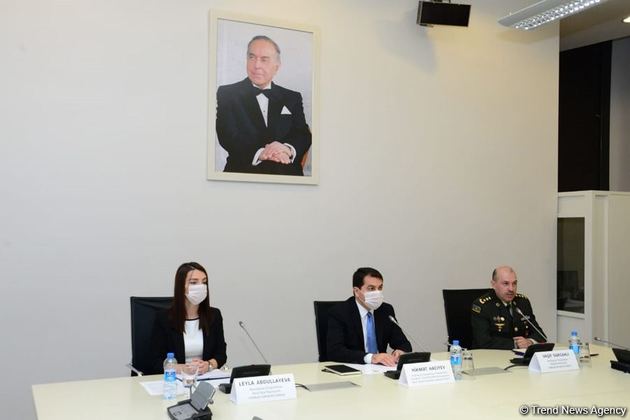 The provocation committed by Armenia on July 12 in the direction of Azerbaijan's Tovuz in the Azerbaijani-Armenian border was pre-planned, assistant to Azerbaijan's President - head of the Foreign Policy Department of the Presidential Administration Hikmat Hajiyev said at the press conference today.

Hikmat Hajiyev also stressed that Armenia, creating illegal companies, is engaged in provision of weapons to the "black market".

Commenting on the OSCE Minsk Group activity, he said that Azerbaijan is not going to participate in the imitated negotiations on the Nagorno-Karabakh conflict.

The assistant to Azerbaijan’s president also stressed that the Azerbaijani side expects from the Minsk Group co-chairs to multiply their efforts and intensify the negotiations.

Hajiyev said that 11 states are participating in the Minsk process, and it is necessary to hold an extended meeting with the participation of all the states.

Spokesperson for the Azerbaijani Ministry of Foreign Affairs Leyla Abdullayeva said that the events of July 12 are a military provocation, an act of terrorism committed by Armenia.

Head of the press office of Azerbaijan’s Defense Ministry, Colonel Vagif Dargahli, in turn, said that Armenia first began to fire at the positions of the Azerbaijani army and settlements on July 12 using large-caliber machine guns, and then shelled them from heavy artillery.