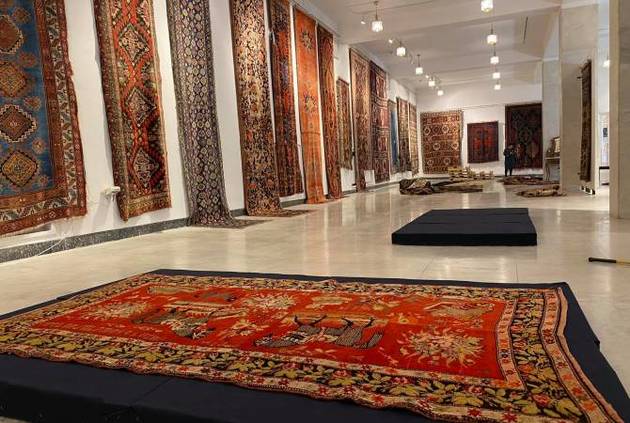 The Azerbaijani Ministry of Culture has issued an appeal in connection with the carpets stolen by Armenia.

"Proceeding from the information on the Armenpress.am website, an exhibition of carpets illegally taken from Shusha Carpet Museum on November 1, 2020 will be held on February 20, 2021 at the Alexander Tamanyan National Museum-Institute of Architecture in Armenia," the ministry said.

"We state that the so-called "Artsakh carpets" that will be showcased at the exhibition are samples of the national heritage of the Nagorno-Karabakh region, which is an integral part of Azerbaijan," the message said. "This exhibition is another theft and misappropriation of the cultural heritage of the Azerbaijani people by the Armenians."

"The samples of cultural heritage were illegally taken by Armenia from the internationally recognized territories of Azerbaijan and delivered to other country," the message said. "This is the violation of international law in accordance with the 1954 Hague Convention of UNESCO and article 19 of its Second Protocol, as well as article 11 of the 1970 Convention."

"Thus, the Armenian government is fully responsible for this. Moreover, a carpet is such a unique work of art, which is a source of important information about the history of the region in which it has been woven, about belonging to the people who live in this territory. The main goal of showcasing Azerbaijani carpets as Armenian is to falsify the history of the Nagorno-Karabakh region," the message said. "The composition, patterns and colors of these carpets, which have been woven in these lands from time immemorial, prove once again that the Nagorno-Karabakh region is one of the ancient cultural centers of Azerbaijan."

"Historically, Armenians were not engaged in carpet weaving, they only sold carpets. While selling, they tried to form a false idea, presenting Azerbaijani carpets as Armenian ones. Yakov Zedgenidze, who conducted research in the Nagorno-Karabakh region in the 19th century, stressed that the entire Muslim population was engaged in carpet weaving and the Nagorno-Karabakh carpets rank first in the entire Caucasus both in quantity and quality," the message said. "The researcher also wrote that the Armenians were not involved in this art, on the contrary, they looked at carpet weaving as something "not worthy"."

"Thus, the demonstrative holding of an exhibition of samples, illegally taken out of the Carpet Museum in Azerbaijan’s Shusha city, under the auspices of the Armenian government is a vivid example of Armenia's disregard for the international conventions and UNESCO must act on this. The Azerbaijani Ministry of Culture will hold the necessary legal consultations with UNESCO on this issue," the ministry concluded.