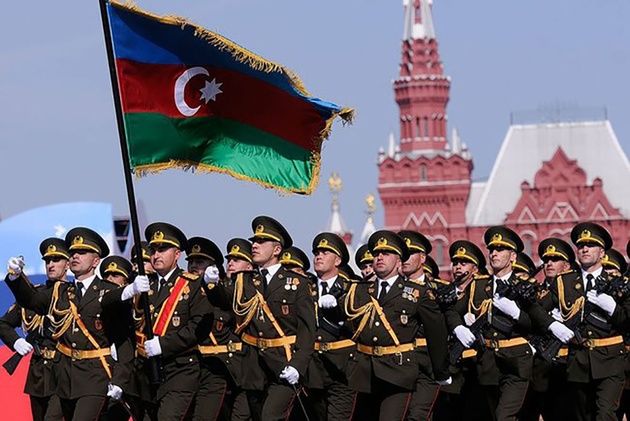 The servicemen of the Azerbaijani Army will take part in the military parade dedicated to the 75th anniversary of Victory in the Great Patriotic War to be held on May 9 in Moscow, according to the statement posted on Azerbaijani Defense Ministry's website.

Azerbaijan will be represented at the solemn ceremony by flag-bearers and a parade crew consisting of 75 servicemen of the Azerbaijani Army.

Azerbaijani President Ilham Aliyev told Rossiya-24 TV channel on December 30 that he will also arrive in Moscow on May 9.

"Next year I plan to be in Moscow on 9 May. I have received an invitation from [Russian President] Vladimir Vladimirovich Putin. I usually celebrate this date with veterans in Baku, but this time I will be in Moscow in the same way as five years ago, when we celebrated the 70th anniversary of our Victory," the head of state said.

The Azerbaijani President noted that his country honors the memory of those killed in the Great Patriotic War although, let me tell you quite frankly, this wasn’t the case in the early years of independence, unfortunately. When a group calling itself the Popular Front came to power through a military coup, they canceled the 9 May holiday, war veterans were subjected to persecution and moral terror. Almost the same is happening in some countries now.

He noted with regret that in the early years of independence, "when a group calling itself the Popular Front came to power through a military coup, they canceled the 9 May holiday, war veterans were subjected to persecution and moral terror, almost the same is happening in some countries now."

"Only after Heydar Aliyev returned to power was historical justice restored. Veterans began to enjoy the support of the state again, 9 May was declared a national holiday and we have been celebrating this holiday since 1994. It is a non-working day," Ilham Aliyev stressed.

"The memory of the Great Patriotic War and those who died for their homeland – out of more than 600,000 people who participated in the war from Azerbaijan 300,000 were killed – is sacred for us. We honor and remember this," he noted.

The head of state also recalled that attempts to rewrite history or glorify fascism are "totally unacceptable."

What is danger of glorification of Nazi collaborators