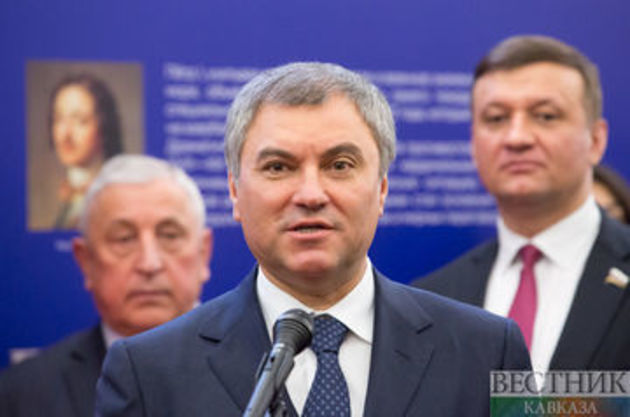 The remarks of Ukrainian President Vladimir Zelensky about war with Russia are very dangerous for European countries, therefore, EU leaders should pay attention to them, Speaker of the Russian State Duma Vyacheslav Volodin noted in his Telegram channel on Sunday, commenting on Zelensky’s statement that he believes a full-scale war with Russia is possible, TASS reports.

"Does the leadership of European countries understand that these remarks by Zelensky are very dangerous to their nations? European Union leaders should pay attention to what’s happening in Ukraine. If they don’t want Europeans to be dragged into a full-fledged war," Volodin underlined.

He is convinced that Russians and Ukrainians "are one people that became split because of politicians like Zelensky." "We have common history, culture, religion, we are united by the Russian language. Therefore, we need to think about friendship and developing relations rather than about war and gap," the politician stressed.

According to him, Zelensky’s statements about the gap between people of the two countries point to his unwillingness to establish normal relations. "Zelensky made statements which make it clear that our brothers - Ukrainian citizens - will have even more problems with this president in addition to the ones that the Ukrainians already had to face," the speaker emphasized. Volodin recalled, "a bad peace is better than any war, even more so than a full-fledged," which needs to be clear "even if you’ve spent your whole life making jokes and playing roles." Moreover, he added that wars often lead to country destructions.

Earlier, Zelensky told the YES Brainstorming forum that a full-scale war with Russia is possible in response to a moderator’s question. At the same time, he added that it would be "the biggest mistake for Russia primarily." The Ukrainian leader is also convinced that Ukrainians and Russians have become enemies with a huge gap lying between them now.