The official opening ceremony of the FIG World Challenge Cup in Artistic Gymnastics started at the National Gymnastics Arena in Baku. It is the first international competition of this level in Azerbaijan.

Young Azerbaijani athletes performed a composition called 'The Future of Azerbaijani Gymnastics', the head coach of the Azerbaijani national team in rhythmic gymnastics, Mariana Vasileva, said. "As the name implies, all of our young athletes will take part in the composition. The composition will last 15 minutes and will be accompanied by the national Azerbaijani music," she noted. 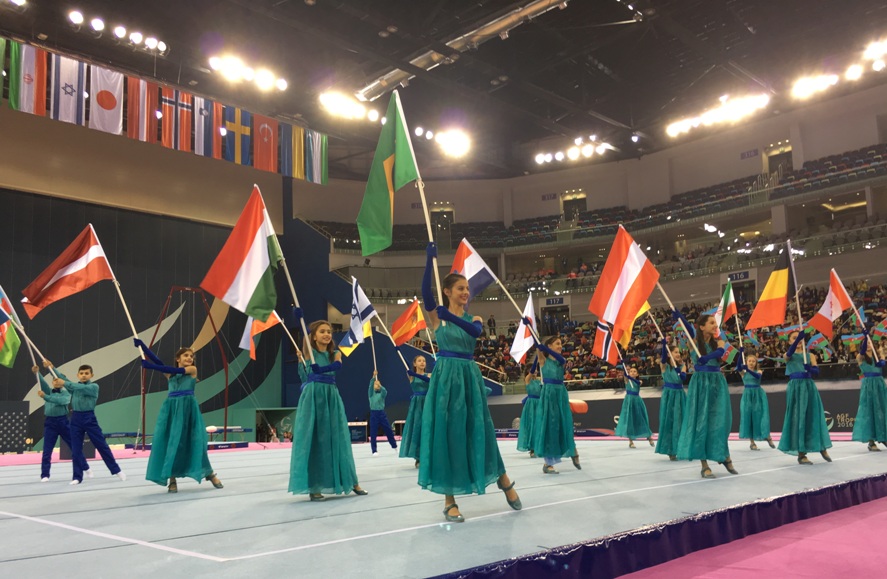 The vice-president of the Azerbaijan Gymnastics Federation, Altay Hasanov, welcomed the athletes, sports officials and spectators. "Welcome to the World Challenge Cup in Artistic Gymnastics! This National Arena gym was opened in April 2014 with the participation of Azerbaijani President Ilham Aliyev and the First Lady, President of the Azerbaijan Gymnastics Federation, Mehriban Aliyeva. In June 2014 the arena hosted the European Championship on Rhythmic gymnastics, as well as competitions in gymnastics in six types of exercises took place here during the First European Games," he said.

Altay Hasanov also recalled the successes of the Azerbaijani gymnasts. "Our gymnasts won 7 medals at the competitions, including five in gymnastics. Last year, for the first time in the history of men's artistic gymnastics in Azerbaijan Oleg Stepko won a bronze medal at the World Championships. These victories encouraged us to hold the World Cup in Baku," the vice-president of the Azerbaijan gymnastics Federation noted.

"I am sure that we will pass this test and, in collaboration with the International Gymnastics Federation, the tournament will become a tradition for us. I welcome all the gymnasts and wish them new victories. I want to thank all the organizers and spectators. I declare the World Challenge Cup in Artistic Gymnastics open," a correspondent of Vestnik Kavkaza cited Altay Hasanov as saying.

As the President of the Technical Committee on Women's Gymnastics Committee of the International Federation of gymnastics, Nellie Kim, noted in her welcoming speech, "the work carried out by the Azerbaijan Gymnastics Federation on the development of all kinds of gymnastics bears fruit today". "Baku is hosting  the World Gymnastics Cup for the first time. The country has created all necessary conditions for holding large-scale events. Gymnasts from 19 countries gathered in the capital of Azerbaijan to participate in the first round of the World Cup," she said.

"I am sure that the national anthems of various countries will be performed in gyms during award ceremonies. Each stage of the World Cup is an opportunity for athletes to show their abilities on the eve of the main sporting event of the year - the Olympic Games in Rio de Janeiro. Today, we are beginning our way to the Olympics. I wish success, strength and well-being to all the gymnasts. Good luck!" Nelly Kim concluded.

46 male and 22 female gymnasts will compete for medals in apparatus finals of the World Challenge Cup, in general, athletes from 19 countries will participate at the tournament.