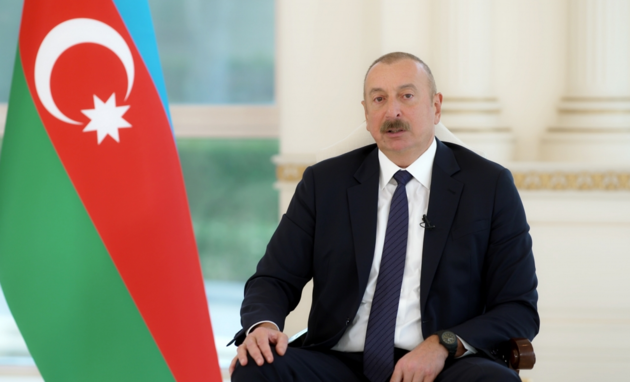 More than a year after the end of the Karabakh war, Armenia continues its destructive policy, President of Azerbaijan Ilham Aliyev told Azerbaijani TV channels. He stressed that Azerbaijan has been actively engaged in projects for the revival of Karabakh and Eastern Zangezur throughout the year, while Armenia was trying to stall the post-conflict settlement of relations.

"A very extensive program was launched last year. It would take a long time to list all these activities, but I should emphasize the main issues again, so that the people of Azerbaijan can see that, looking at the experience of post-war countries, this is indeed the largest program in history in terms of its proportions. As you mentioned, what makes this program quite special is that we are doing it at our own expense, without asking for or receiving help from anyone. Of course, there had to be a sequence here as well. This sequence has to be based on logic. First of all, what do we need? First of all, demining work should be carried out. Both ANAMA and the Ministry of Defense are active in this area, as is the Ministry of Emergency Situations. This process is going on. Unfortunately, we are still losing people. Since the war ended, about 200 Azerbaijani citizens – both civilian and soldiers – have been killed or seriously injured. Therefore, without doing this, we cannot start a large-scale return program," he said in the first place.

"For this reason, first of all, the focus of the demining work has been on places where there is infrastructure, i.e. power lines and roads. Those areas had to be cleared first so that we could start this work. On the other hand, the process of demining the cities for which a master plan has been prepared is progressing fast, especially Shusha and Aghdam. First of all, we had to create electricity infrastructure because the local terrain of the liberated territories, especially in the mountains, is such that if there is no infrastructure, it will be very difficult, perhaps even impossible, for the military to serve there. Just imagine that there were no settlements in the parts of Kalbajar and Lachin districts bordering on Armenia in the Soviet times. No-one lived there and there were no roads for tens of kilometers from the border. It starts to snow there in October and the snow melts in May. Just imagine the scale of the work we had to carry out in a short time. I can say that many don’t know this. In those regions alone – in Kalbajar, Lachin, Zangilan and Gubadli – on the border with Armenia, we have built about 700 km of roads," the Azerbaijani president said.

"We had to bring in equipment, we had to bring in specialists. Our workers are regularly fired upon from that side. Unfortunately, Armenia did not learn the lessons of the second Karabakh war. Therefore, we were able to do it in a very difficult situation, and today we are settled in all major checkpoints along the border. Not only have we settled there, we have also built a modern infrastructure to be able to serve there. Because the weather is very cold there and the service conditions are quite harsh. The thickness of the snow is around 3-4 meters. We now have supplies of food, roads and power lines there, so there are conditions for normal service. But when we look at Armenian posts, we see how deplorable they are. In other words, they are stationed in tents and have to fight the cold while serving," Ilham Aliyev said.

"At the same time, the process of creating electricity infrastructure has begun, as we built seven substations on all liberated lands in one year and connected all these substations to a common circular network. None of them now can operate on its own. In other words, for example, the power received from there now and the power produced at hydropower plants are fed into in the general network. This allows us the opportunity to avoid a crisis. This was a huge and difficult job. Just imagine – seven substations in one year, in places where there is no housing, there are mines and there is no infrastructure. This is a great sacrifice. In particular, in winter, in the snowy conditions in Kalbajar district, electric pylons were installed from Dashkasan, which is 3,500 meters high. This is a great sacrifice indeed and shows our potential. So this shows that we are not only financially, but also technically and professionally independent. We did not get help from anyone and did everything ourselves," the Azerbaijan i leader stressed.

"Then intercity roads. This process was started and then expanded a great deal. A tunnel more than 11 kilometers long is being built from Goygol to Kalbajar. Because it is difficult to use this road in winter. A second 4-km tunnel is being built between Kalbajar and Lachin. It will give us the opportunity to easily travel to Kalbajar from the direction of Goygol-Ganja. The Barda-Aghdam highway is under construction. We are connecting Naftalan with Talish and Sugovushan. Other roads, such as the Fuzuli-Shusha road and the Zafar road, were built in one year. The second road is being built – the Fuzuli-Hadrut, Fuzuli-Jabrayil, Horadiz-Aghband, Zangilan-Gubadli-Lachin road, as well as additional roads in the direction of Lachin. We have already started the construction of the Barda-Aghdam railway. We have started the construction of the railway, which is a part of the Horadiz-Aghband-Zangazur corridor," he noted.

"Notice how much work has been done in Shusha. At the same time, the foundations of Aghdam, Zangilan, Hadrut and Dashalti mosques have been laid and repairs have started. In other words, it would take a long time just to list everything. I try to pay attention to each project. Therefore, I visited the liberated lands many times in 2021, and along with these infrastructure projects, urban development projects will be implemented this year. We have now laid the foundations of schools and hospitals. The master plans of Aghdam and Fuzuli cities are ready. Agreements have been signed with relevant companies to develop master plans for other cities. We want everything to be done in a comprehensive manner – both quickly and, at the same time, not in a haste. Because everything must be comprehensive and the people who are about to return there must be provided with the best conditions," the Azerbaijani president assured.

"We should not stop for a number of factors. First of all, unfortunately, there are strong revanchist sentiments in Armenia, both in the government and in the opposition, and also in society. Unfortunately, we are seeing this in real life. Just yesterday, another military provocation was committed against Azerbaijani servicemen. As a result of this baseless aggression, an Azerbaijani serviceman was killed. It is not the first time this has happened since the war. Unfortunately, Armenia did not learn the lesson from all our previous punitive measures," Ilham Aliyev noted.

"Yesterday's incident is no exception. The Azerbaijani Armed Forces have taken decisive measures to punish the criminals, and today, according to the information I received from the Minister of Defense, six to eight enemy servicemen were killed and many others were wounded. Shortly after this incident, the Armenian side began to insistently request a ceasefire. However, they must understand that the death of an Azerbaijani serviceman will never be forgiven. Despite numerous requests from the Armenian side, I would even say pleas – since this incident took place not in the area of responsibility of Russian peacekeepers, but in the direction of Kalbajar – and also despite the requests of Russian peacekeepers, I ordered the Defense Minister at 21:30 to cease fire and let the Armenian side collect their numerous wounded servicemen. In other words, both this incident and all previous incidents ended in this way – crimes, provocations, covert provocations, punitive measures by the Azerbaijani side, and then pleas for a ceasefire. As a result, Azerbaijan has once again demonstrated humanism, but only after we came to the conclusion that the punitive operation should be stopped," the Azerbaijani leader stated.

"In fact, this explains why we continue the army building process. There are a number of aspects here. First of all, of course, we used up a lot of the ammunition during the war, so we have to replenish that now, and the new contacts signed will provide us with this opportunity. The supply of weapons and ammunition is already underway. The next issue is the purchase of modern weapons systems of different types. We have always attached great importance to this issue. Military technology is evolving fast and we always want to get the best equipment available. As you know, we do not have a problem with the number of parties interested in selling weapons to us. The third issue is to increase the combat capability of the Armed Forces. The second Karabakh war is not only a great victory for us, it is also a great experience in the field of operations. It has been a practical test of the Armed Forces not in training, but in real operations, and our Armed Forces came out of this test with dignity. However, the second Karabakh war also showed us what to do next, what elements of the military infrastructure we did not use, used in a very limited manner or that they were weak," he pointed out.

"The creation of a commando force is just one of the elements of improving our military capabilities, but it is also a very important element. This process has begun and, as I have already said, will be continued. Our special forces showed their best during the second Karabakh war. I have said this many times. Therefore, the improvement of these forces, as well as the creation of a new special force, is a necessity dictated by the situation. We are talking about attempts at exacting revenge. The point is that we do not know what will happen in a year, two or five years. Today, the Armenian army is in a completely dilapidated state and is incapable of resisting us on a scale greater than in the second Karabakh war. We are closely following all military-building efforts in Armenia both with their own forces and with the help of their partners. Therefore, I have sincerely and openly stated that if we see even the slightest threat to our security, we will immediately crush it no matter where it is and no matter how deep it is in the territory of Armenia. Everyone, first of all, the Armenian leadership should know and understand this," the Azerbaijani head of state noted.

"Therefore, as a result of the measures we are taking, the Azerbaijani Armed Forces will become even stronger than they were during the second Karabakh war. However, as we all know, the experts and the public of a number of countries do not conceal their admiration with what we demonstrated during the war. This unexpected and explicit admiration, of course, made all of us feel very proud of ourselves. But at the same time, we must not become complacent or arrogant, as they say, and not repeat the mistakes of the Armenian side, which considers themselves to be great fighters but actually set a new record in the sprint. Of course, this will not happen, but in any case my actions now, including those within the framework of army building, are aimed at keeping our feet on the ground. We have done what is necessary, and we have done it with dignity, honor and justice. And now we must think about the future and the ability of the Azerbaijani Armed Forces to protect our people and state from all possible threats. In my opinion, a lot has happened in the year since the war, and this has shown – not only in relation to Armenia – that we are able to defend ourselves properly," Ilham Aliyev concluded.