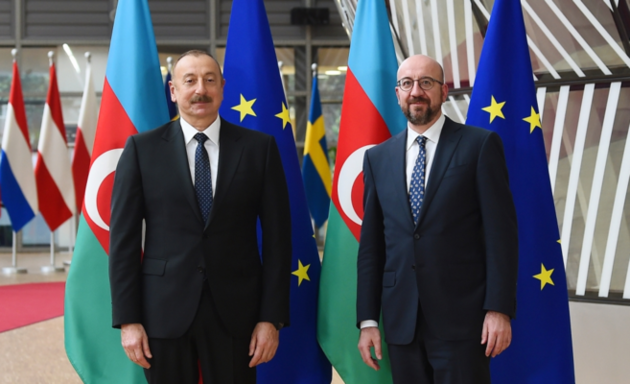 Azerbaijan has determined the composition of its commission for the delimitation and demarcation of the border with Armenia, as well as the delegation for the preparation of a peace treaty, it is ready for negotiations in the "Baku-Yerevan" format. This was stated by Azerbaijani President Ilham Aliyev during a telephone conversation with European Council President Charles Michel, held on the initiative of Brussels.

"The head of state said that in accordance with the results of the Brussels meeting, the Azerbaijani side determined the composition of the national commission for the delimitation and demarcation of the Armenian-Azerbaijani border, the delegation for the peace treaty preparation between the two countries. Azerbaijan is also ready for negotiations with the opposite side in the "Baku-Yerevan" format. President Ilham Aliyev stressed the importance of taking the five principles presented by Azerbaijan as a basis for negotiations on a peace treaty", AZERTAC writes.

Ilham Aliyev thanked Charles Michel for his support in the normalization of Armenia-Azerbaijan relations, including the demarcation and delimitation of borders, the preparation of a peace treaty, the opening of transport and communication lines and constant attention to these issues.

The European Council president indicated that he would continue efforts to normalize relations between Yerevan and Baku, as well as to ensure sustainable peace in the South Caucasus.

In addition to this, during the conversation, the EU's intention to support Azerbaijan in demining and determining the fate of about 4,000 Azerbaijanis who are considered missing after the first Armenian-Azerbaijani war was approved.