Ilham Aliyev: legal regimes of Zangezur and Lachin corridors should be same 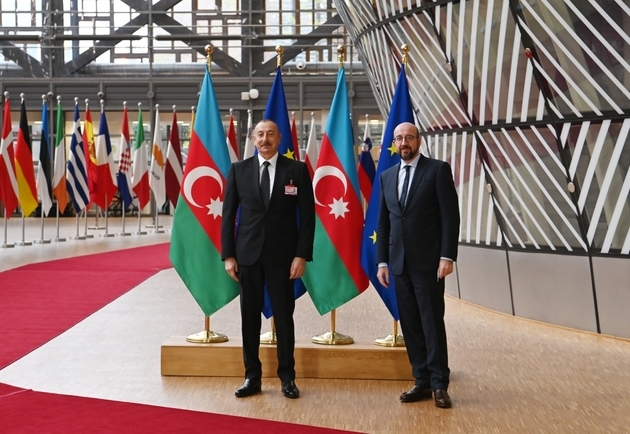 President of Azerbaijan Ilham Aliyev at the joint press conference with NATO Secretary General Jens Stoltenberg said the legal regime of the Zangezur corridor linking Azerbaijan with its autonomous exclave of Nakhchivan should be the same as that governing the Lachin corridor between Armenia's Goris and Azerbaijan's Khankendi.

According to the Vestnik Kavkaza correspondent, that's how Ilham Aliyev answered the question of whether border customs points will operate on the route of the Zangezur corridor. The President of Azerbaijan explained that now both options are being discussed - with and without customs.

"The Trilateral Statement clearly says that Azerbaijan provides security and unimpeded access for connection between Karabakh and Armenia and Armenia should provide the same unimpeded access and security for connections between Azerbaijan and Nakhchivan. So, today there are no customs on Lachin Corridor there. Therefore, there should be no customs on Zangezur Corridor. If Armenia would insist on using their custom facilities to control the cargos and people, then we will insist on the same on Lachin Corridor," he said.

"The decision is to be made by Armenia," Ilham Aliyev said, noting that he will discuss these two options with Prime Minister Nikol Pashinyan during a joint dinner with President of the European Council Charles Michel.

In addition, he stressed that it’s a kind of obligation for Armenia to open the Zangezur corridor. The Azerbaijani President said that at this stage they have achieved an agreement on building the railroad connection from Azerbaijan through Armenia to Nakhchivan Autonomous Republic and also agreement on construction of the highway, but the exact route of the highway has not yet been identified.