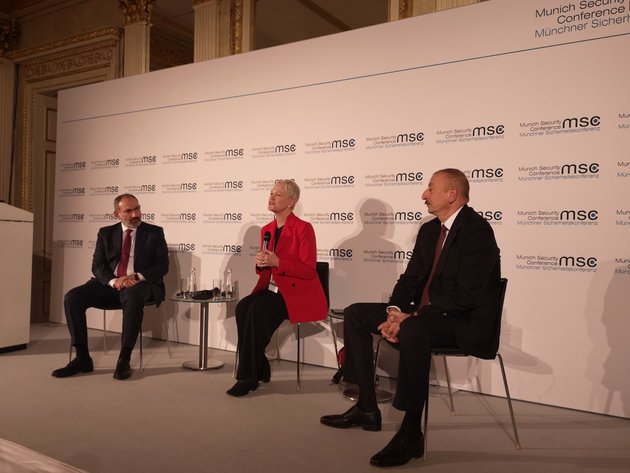 An open discussion was held today at the Munich Security Conference between the President of Azerbaijan, Ilham Aliyev, and the Prime Minister of Armenia, Nikol Pashinyan.

Ilham Aliyev, who was given the right to open this event, first of all, thanked the Chairman of the Munich Security Conference, Wolfgang Friedrich Ishinger, for organizing the meeting. He recalled that several years ago, the predecessor of Nikol Pashinyan canceled a similar open discussion in Davos. “I am glad that finally, we are here to present our positions and answer questions that I think will be enough,” he said.

“From a historical point of view, in 1805, the Karabakh khan Ibrahim Khan signed an agreement with Russian Empire General Tsitsianov. Under this agreement, the Azerbaijani Karabakh Khanate as an independent country was passed under the rule of the Russian Empire. This agreement was called the Kurekchay Treaty (you may check its text on the Internet), and nothing was said there about the Armenian population of Karabakh. The other two documents were signed in 1813 and 1828 - the Gulistan and Turkmanchay treaties - under them the rest of Azerbaijan became part of the Russian Empire, as did Dagestan, Georgia and Armenia. This is the historical part of the issue, ” the Azerbaijani leader said.

“At a time when the Russian Empire collapsed, and the Georgian and Azerbaijan Democratic Republics were created, by one the first decrees of the Azerbaijan Democratic Republic in 1918 it was decided that Iravan should be transferred to Armenia and declared the capital of Armenia. And this is a historical fact. And if you give something to someone, it means that it belonged to you. In 1921, the Caucasian Bureau of the Bolshevik Party decided to leave Nagorno-Karabakh as part of Azerbaijan - namely, to leave, and not convey, as some Armenian historians present it. This is also a historical fact,” Ilham Aliyev drew attention, adding that the decree on the creation of the Nagorno-Karabakh Autonomous Region within Azerbaijan, issued in 1923 by the Azerbaijan SSR, is also a historical fact.

Then the President of Azerbaijan recalled the history of the Nagorno-Karabakh conflict. “In the late 1980s, Armenia began aggression against Azerbaijan. 300 thousand Azerbaijanis were deported from the territory of Armenia. Then, in the early 1990s, Armenia unleashed aggression against the Republic of Azerbaijan, and as a result of this aggression, almost 20% of our territory was occupied, one million Azerbaijanis became refugees and internally displaced persons. Our people fell victim to ethnic cleansing. In 1992, the former Armenian authorities committed a war crime - genocide in Khojaly. As a result, 613 innocent citizens, including 106 women and 63 children, were brutally murdered,” the president listed the facts.

At the end of the opening remarks, the Azerbaijani leader reiterated that the belonging of Nagorno-Karabakh to Azerbaijan was recognized by the international community. “The UN Security Council adopted four resolutions requiring the withdrawal of Armenian troops from the occupied territories - these resolutions have not been implemented. Thus, any decision that will be made as a result of the peace negotiations should ensure the preservation of the internationally recognized territorial integrity of Azerbaijan, ”Ilham Aliyev concluded.

Merkel: Azerbaijan's potential can be developed only after resolution of Karabakh conflict

Matthew Bryza: "It is not surprising that Germany recognizes Russia's leading role in the Nagorno-Karabakh conflict settlement"

Ilham Aliyev in Berlin: we do not want war, we want to return our territories