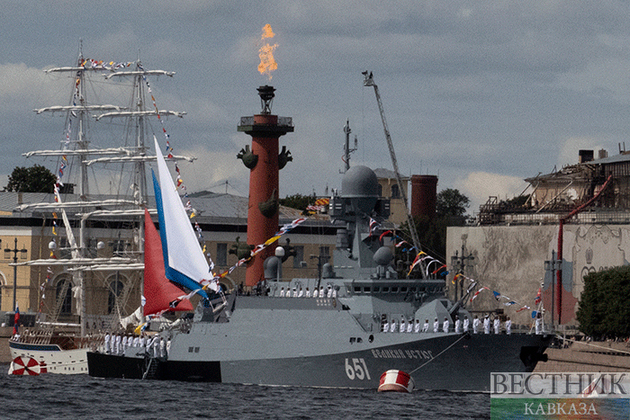 Today, July 31, Russia celebrates the Day of the country's Navy. At this moment, the main naval parade is taking place in St. Petersburg, which is received by the Supreme Commander-in-Chief of the Russian Armed Forces Vladimir Putin. The President of Russia will make a speech, and in addition to receiving the parade, he will traditionally inspect the parade line of warships in the Gulf of Finland and in the Kronstadt roadstead.

Before the start of the parade, the President signed decrees approving the Naval Doctrine and the Ship Charter of the Russian Navy. The ceremony was held in the building of the State Museum of the History of St. Petersburg in the Peter and Paul Fortress, the Kremlin press service reported.

"This year's parade is special. It is dedicated to the 350th anniversary of the birth of our city and the powerful Russian fleet's founder, Peter the Great", St. Petersburg Governor Alexander Beglov said, quoted by the city administration's website.

Russian sailors successfully ensure the country's security, Defense Minister Sergey Shoigu said in his congratulations on the Navy Day on the ministry's website.

"Today, the Navy personnel clearly demonstrates to the whole world excellent maritime training and coherence of actions, successfully solves the tasks set to ensure the state's security", the minister noted, thanking the veterans who participate in the patriotic education of young people and preserve the traditions of their legendary predecessors, as well as congratulated military personnel, workers of shipbuilding, ship repair enterprises, military units, scientific organizations and enterprises of the military-industrial complex.

The Army General wished everyone "good health, happiness, good spirits and optimism, new successes and achievements in service for the Motherland".

More than 3,000 servicemen, 40 ships and boats, submarines and sailing ships, as well as 42 aircraft will take part in the main naval parade. The parade along the Neva will involve 17 ships and boats, including the brig Rossiya, the symbol of the Scarlet Sails alumni holiday.

Before the parade in St. Petersburg, lights were lit on the Rostral columns on the Spit of Vasilievsky Island. On the Kronstadt roadstead, 10 ships and one submarine will take part in parade formation, and during the day, residents and guests of St. Petersburg will be able to visit some ships on the Lieutenant Schmidt Embankment, as well as on the English Embankment. The parade will end with a solemn passage of parade crews along the embankment next to Senate Square. After the concert performance of the famous rock opera "Juno and Avos" is completed on Palace Square, a festive fireworks display is planned.

Naval parades will also be held in other regions of Russia - in Vladivostok, Baltiysk, Severomorsk, Novorossiysk, Dagestan's Kaspiysk and Syrian Tartus. Thus, ships of the Azerbaijani Navy will take part in the celebrations on the occasion of the Day of the Russian Navy on the Caspian Sea in Kaspiysk, they have already arrived on the raid. In total, 40 ships, boats and ships, more than 20 units of military equipment and about 500 servicemen will be involved in the festive events here.

But in Sevastopol, all events dedicated to the Navy Day have been canceled for security reasons.

Let us remind you that the Navy Day is celebrated in Russia every year on the last Sunday of July. This year the Russian Navy is celebrating its 326th anniversary. In the same year, the nuclear submarine "Belgorod" became part of the fleet. The submarine will become the first experimental carrier of underwater nuclear drones "Poseidon".

Earlier, Deputy Commander-in-Chief of the Russian Navy Vladimir Kasatonov said that this time 47 ships and 42 aircraft will take part in the parade. A female crew and a large number of sailboats are among the innovations.