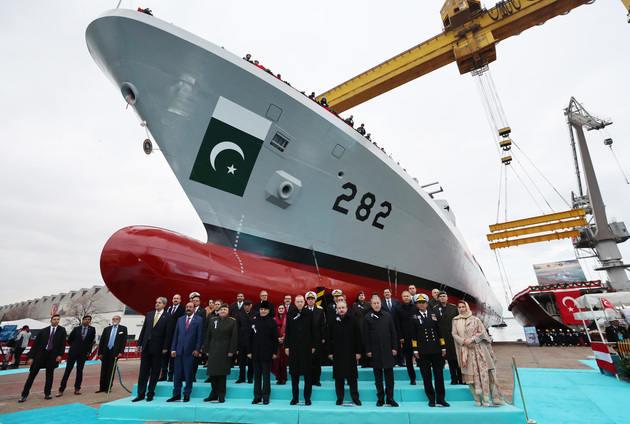 Turkish President Recep Tayyip Erdoğan stressed what he said was a strong mutual will between Türkiye and Pakistan to further expand their defense cooperation, as the two countries launched the latest corvette warship tailored for the Pakistan Navy.

Erdoğan was accompanied by Pakistani Prime Minister Shahbaz Sharif and other officials during the inauguration ceremony for PNS Khyber, the third of the four MILGEM corvettes built by Türkiye for Pakistan, at Istanbul Shipyard.

"The solidarity between us is strengthening day by day with a strategic perspective decisively based on the history, friendship and potential of the two countries," Erdoğan said. "The defense industry is one of the important pillars of this cooperation."

Erdoğan reiterated the fact that Türkiye is one of only 10 countries in the world that can design, build and maintain warships using its national capabilities. "We will not stop until we move Türkiye to first place in the world's super league in the field of the defense industry, and we will continue our fight," he noted.