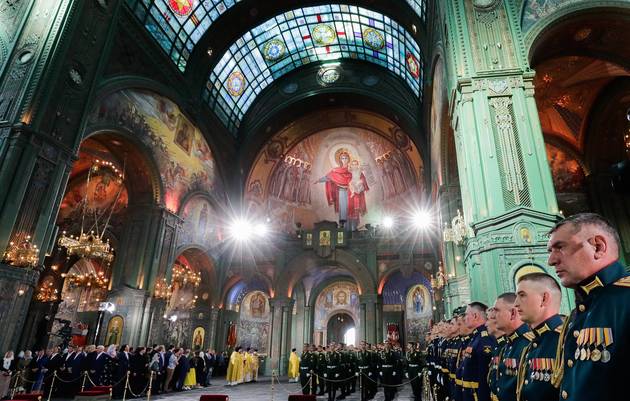 Patriarch Kirill in Moscow took part in the process of consecration of the main temple of the Russian Armed forces, located in the town of Kubinka, The Times Hub reports.

This event is followed by the divine Liturgy.

The main Temple of the armed forces, who is also a military Museum, appeared on the territory of the Park “Patriot” on the occasion of the 75 th anniversary of the Victory. It was planned that the opening will take place on 9 may, but the ceremony of worship was moved to the background of the pandemic coronavirus.

In the framework of the consecration of the Church and the Liturgy adhered to health standards, attended the event only Ministers of the ROC, head of the defense Ministry Sergei Shoigu, his deputies and representatives of the local authorities. Journalists could get to the service only if there is a certificate confirming the absence COVID-19.

Archpriest Leonid Kalinin, the process of sanctification of the temple compared with the day of birth. Drew the attention of the priest and that, although the ceremony was not as lush as intended, it managed to preserve in itself “all the power” inherent “to the birth of the Church”.