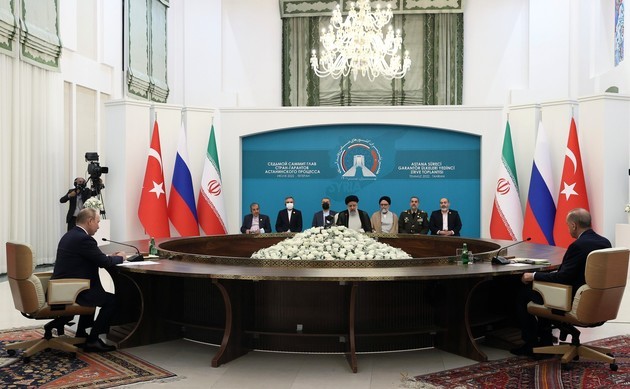 Russian President Vladimir Putin, Turkish President Recep Tayyip Erdogan and Iranian President Ebrahim Raisi confirmed their adherence to Syria’s sovereignty and territorial integrity and stressed the lack of alternatives to the political settlement in this country at the first Astana Summit in three years held in Tehran on Tuesday.

According to their joint statement, the Astana Troika should play a key role in stopping the Syrian conflict. The leaders intend to expand the trilateral format and bolster coordination "in different fields in order to promote joint political and economic cooperation."

The three parties confirmed that the Syrian conflict does not have a military solution and it can be settled only by the Syrians themselves in a political process.

In their joint statement, the three leaders stressed "their unwavering commitment to the sovereignty, independence, unity and territorial integrity of the Syrian Arab Republic as well as to the purposes and principles of the UN Charter."

They also rejected "all attempts to create new realities on the ground under the pretext of combating terrorism, including illegitimate self-rule initiatives".

The Astana trio expressed "their determination to continue working together to combat terrorism in all forms and manifestations."

The three leaders stressed "the necessity to maintain calm on the ground by fully implementing all agreements on Idlib."

The Astana Troika rejected all unilateral sanctions against Syria and urged the international community to bolster aid to the Syrians "without discrimination, politicization and preconditions and in a more transparent manner." Additionally, it should "undertake greater responsibility in burden-sharing and to enhance their assistance to Syria, inter alia by developing early recovery projects, including basic infrastructure assets."

The next trilateral summit will be held in Russia. Additionally, the 19th international meeting on Syria in the Astana format will be held before the end of this year.