Putin and Tokayev discuss pullout of CSTO peacekeepers from Kazakhstan 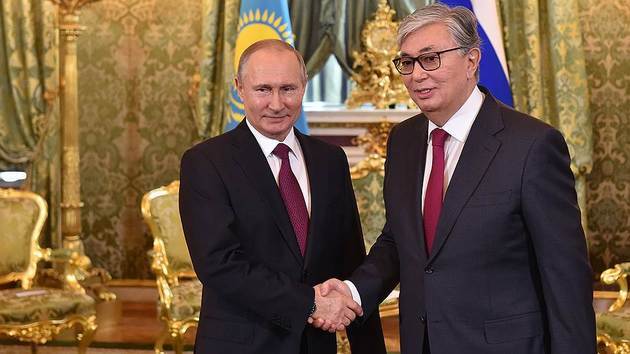 Russian President Vladimir Putin and his Kazakh counterpart Kassym-Jomart Tokayev have held a telephone conversation to discuss the beginning of the agreed pullout of the CSTO contingents from Kazakhstan, the Kremlin’s press-service said on Thursday.

"Kazakhstan’s president reviewed the measures being taken to complete the restoration of order to the country in the light of effective operations by the CSTO collective peacekeeping force," the news release reads.

"The beginning of the agreed pullout of the CSTO member-countries’ contingents from the territory of Kazakhstan was discussed," the Kremlin said.

Russian presidential spokesman Dmitry Peskov said that the invitation to Tokayev to visit Russia remains in force. The Kremlin will announce the dates of the visit when they are clear

"Of course, nothing has changed," Peskov said when asked if the invitation remained in force.

"Certainly, the invitation remains in force. Summit level contacts are extremely important for the two countries and they will be continued. As soon as the exact dates are set, we will let you know," he added.

At the end of December, Russian President Vladimir Putin met with Tokayev on the sidelines of the informal CIS summit and invited him to pay a visit to Russia at the beginning of this year.