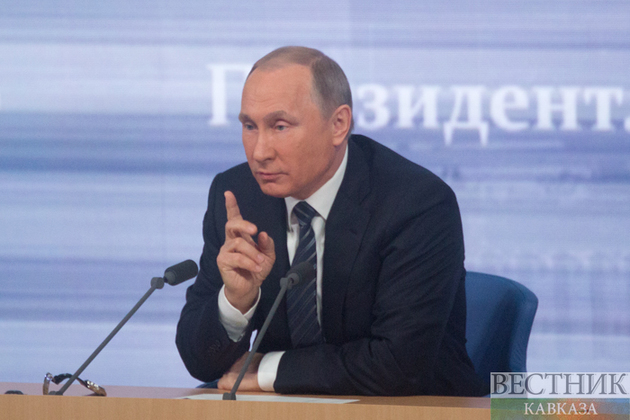 Russian President Vladimir Putin signed decrees at the ceremony in the Kremlin on recognizing the Donetsk and Lugansk People’s Republics.

Speaking in a televised address to the citizens earlier, Putin explained: "I believe it is necessary to take this long overdue decision. I immediately recognize the independence and sovereignty of the Donetsk People’s Republic and the Lugansk People’s Republic."

The Russian leader asked the Federal Assembly to back this decision and then ratify the treaties on friendship and mutual aid with both republics. While announcing this decision, the president voiced confidence about the support of Russian citizens and all patriotic forces in the country.

The situation in Donbass has worsened again to acquire a critical character, Russian President Vladimir Putin said in a televised address to the nation on Monday.

"The situation in Donbass is critical again," he said.

"I would like to stress it once again that Ukraine is not just a neighbor for us. It is inseparable part of our own history, culture, spiritual space. They are our friends, our kin. They are not only our colleagues, friends, former fellow workers, they are our relatives and people linked by blood, family bonds with us," he said.

He recalled that people living in southeastern territories have always called themselves Russians and Orthodox believers. It was this way before the 17th century, when part of these territories unified with the Russian state and ever since, he noted.

The president said at the beginning that his address will be dedicated to the situation in Ukraine. "Dear Russian citizens, dear friends, the topic of my address is the developments in Ukraine and why it is so important for us, for Russia. Naturally, my speech is also addressed to our compatriots in Ukraine," Putin said.

"Today, I am addressing you directly not only to assess the development but also to inform you about the decisions we make and possible further steps in this direction," he said.

"Otherwise, the Ukrainian ruling regime will be wholly and entirely responsible for the possible continuation of the bloodshed," Putin pointed out.

Putin noted that Ukraine’s statement of potential development of its own nuclear weapons are not an empty bravado, Kiev has Soviet technologies and delivery systems for such weapons.

"We also know that statements have already been made that Ukraine intends to develop its own nuclear weapons, and it is not an empty bravado. Ukraine indeed has Soviet nuclear technologies and delivery systems for such weapons, including aviation and Tochka-U tactical missiles, developed back in the Soviet; their range is over 100 km, but they will develop even longer-range ones, it is only a matter of time. There is groundwork from Soviet era," Putin said.

"Therefore, it would be much easier for Ukraine to obtain nuclear weapons than to some other states - I won’t name them now - who effectively carry out such research. Especially in case of technological support from abroad, and we must not rule this out as well," the President added.

Putin underscored that, should Ukraine obtain weapons of mass destruction, the situation in the world and in Europe will change dramatically.

"We cannot leave this real danger without reaction," Putin said. "Especially, I repeat, that Western benefactors may aid in emergence of such weapons in Ukraine, in order to create yet another threat for our country.".