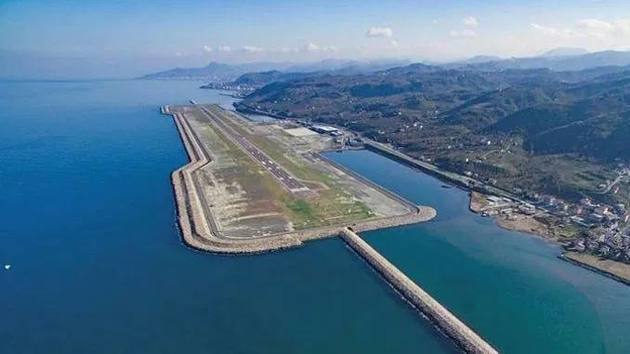 The country's 58th airport, Rize-Artvin, opened in the Turkish province of Rize. The eastern Turkey's air harbor has officially opened after the arrival of with the President of the Republic Recep Tayyip Erdoğan. The President of Azerbaijan Ilham Aliyev also took part in the airport's opening.

The new airport with a total area of ​​3 million square meters is located in the Pazar district - 34 km from the city of Rize, 54 km from Hopa and 125 km from Artvin. By the Turkish government's decision, Rize-Artvin Airport received the status of an international air harbor.

The 45-m wide and 3-km-long airstrip is the country’s second longest runway, built on a sea embankment. It is the second airport with a runway built in such a way in Turkey, and the fifth in the world.

The Turkish Air Force SOLOTÜRK aerobatic team performed a demonstration flight in the sky over the Rize-Artvin air harbor before the opening. It lasted about 20 minutes.

The new airport is expected to make a significant contribution to the Turkish economy, including through the new tourism projects' implementation.

During the the air harbor's design stage, the Rize province's tea traditions were also taken into account. The control tower looks like an armudu glass, and a symbolic tea leaf was erected over one of the access roads.