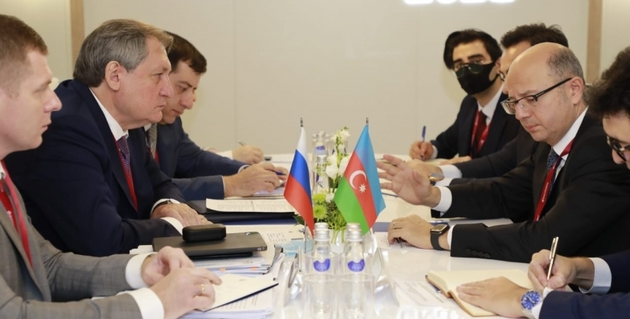 Russian Energy Minister Nikolai Shulginov held a working meeting with his Azerbaijani counterpart Parviz Shahbazov, according to the website of the Russian ministry.

The statement reads that the parties discussed topical issues of cooperation during the Russian Energy Week forum.

Shulginov explained that at the moment work is underway to study the possibility of uniting the energy systems of Russia, Azerbaijan and Iran within the framework of the North-South energy bridge.

"The first stage should be the development of a feasibility study for the project, the agreement has already been signed by the companies TAVANIR, Azerenerji, SO UES and Rosseti. The Iranian engineering company Monenko has been chosen as the developer of the project," the minister noted.

The Russian Energy Minister also drew attention to the fact that Russian companies are interested in the implementation of joint projects for the construction, modernization and restoration of hydroelectric power plants and other energy facilities in the territory of Karabakh. Now the issue of sending a business mission of Russian energy enterprises to the liberated lands of Azerbaijan is being resolved, its goal is to assess the situation and opportunities for implementation of these projects jointly with Azerbaijan, he said.

Shulginov also spoke about the work on agreeing a draft agreement between the Russian government and the Azerbaijani government expanding cooperation in the energy sector.