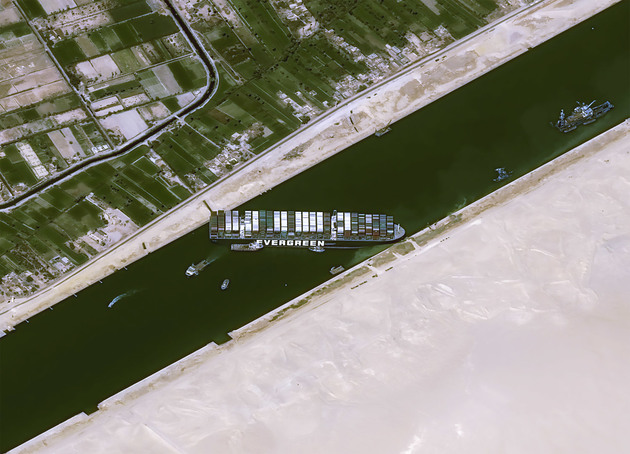 The trade of at least $400 million of crude oil as well as liquefied natural gas (LNG), refined fuels and containers full of goods have come to a standstill in one of the world’s key shipping routes, with millions of dollars more at risk after a massive container ship ran aground in the Suez Canal.

Frantic efforts are under way to free the 400-metre long, 200,000-tonne Ever Given, one of world’s largest container ships, after it was blown off course by strong winds and blocked the canal at the 151km mark.

The Suez Canal Authority (SCA) has deployed seven tug boats to try to refloat the vessel, but their work has been hampered by strong winds and been unsuccessful so far, according to Maritime services group GAC.

At least seven vessels bearing 6.3 million barrels of crude oil have been delayed because of the accident, two northbound behind Ever Given, and five southbound, according to commodities analyst Kpler that tracks bulk goods vessel, South China Morning Post reported.

Using the Brent crude oil price of about $64 a barrel as a value proxy – oil prices shot up after the grounding – the seven vessels carry about $403 million of crude oil. If the Ever Given remains stuck into the weekend, three more vessels carrying 2.5 million barrels of oil, worth about another $160 million, will join the queue from the south, Kpler said.

Another 15 vessels carrying refined bulk products such as naphtha, jet fuel and petrol have been delayed in crossing the canal due to the congestion, Kpler added. Ten are waiting to the south of the canal, while five others heading south to Asia are stuck in the north.

Five LNG vessels and two liquefied petroleum gas carriers are also either delayed in the canal or are waiting to enter, Kpler said.

"While attempts to clear the ship from the canal continue, this queue will continue to build. A salvage squad from the Netherlands will attempt to dislodge the ship beginning Thursday," Kpler said.

The delayed ships are either in the canal or waiting at the north entrance at Port Said Anchorage and Great Bitter Lake Anchorage, or in the south at the Southern Suez Anchorage, said energy and commodities analyst Wood Mackenzie.

The Ever Given was travelling northbound towards Rotterdam from Yantian in China. The two carriers immediately behind it in the convoy – the container vessel Maersk Denver and the bulk carrier Ruby Asia III – were trapped as they watched the grounding unfold.

Supply chain and logistics service provider project44 is tracking 34 other container vessels carrying about 380,000 containers of non-bulk goods either already stuck in the canal or approaching it.

Twenty one of those carriers are within about 100km of the Ever Given waiting in the queue, while 13 other container ships are set to arrive within days.

Ever Given itself holds 20,000 containers of goods.

This brings the total number of goods-laden vessels stuck to about 100, although project44 says more ships, oil tankers, bulk carriers or RoRo vessels – cargo ships that carry wheeled cargo – are being backed up by the hour.

The Suez Canal is one of the busiest trade routes in the world and connects Europe, Asia and Africa. An average of 50 vessels travel through it each day, carrying about 3 million tonnes of cargo, mainly bulk goods such as LNG, oil, and containers. Each year, nearly 20,000 vessels travel the 200-kilometre artificial waterway, accounting for about 12% of world trade by volume.

Ships laden with grains, fertilizers, chemicals, coal, machinery, metal ores and food products all pass through the sea route. Aside from container traffic, the Suez Canal is important for oil and LNG – meaning prices for the commodities could rise as a result of the blockage.

Oil prices reversed a sharp sell-off a day earlier to rise 1% on Friday on mounting fears that it could take weeks to dislodge a giant container ship blocking the Suez Canal, which would squeeze supplies of crude and refined products. Prices, however, were still headed for a third consecutive weekly loss, with the outlook for demand dented by fresh coronavirus lockdowns in Europe.

Both benchmarks were on track for a weekly loss of about 3%, following a more than 6% decline last week.