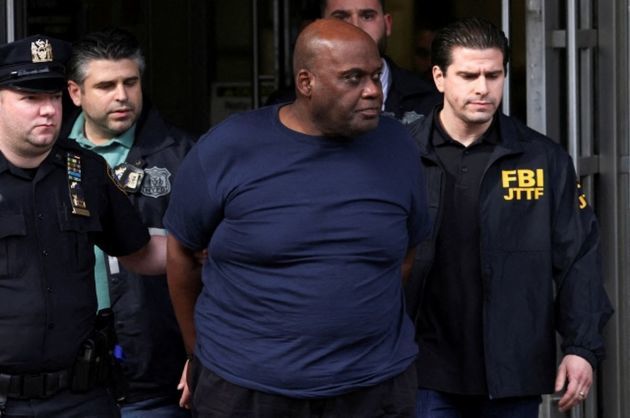 The man suspected of shooting 10 people on a subway train in Brooklyn on Tuesday called in a tip to Crime Stoppers that led to his capture, two law enforcement sources told CNN.

James called in the tip and told authorities he was at a McDonald's on the Lower East Side of Manhattan, the sources confirmed. He essentially told police he saw his face on the news and knew he was wanted, the sources said.

He told the operator he would be inside the restaurant charging his phone but could not provide his phone number, a senior law enforcement source said. The call dropped moments later and was followed by a 911 call from another person who said they had spotted James, one of the two sources told CNN.

Patrol officers arrived at the McDonald's but did not see him, the sources said. Just down the block, they came across a bystander who flagged James to them, the senior law enforcement source said. James was in custody by roughly 1:40 p.m ET, about an hour after he made his call.

James is suspected of setting off smoke grenades and firing a handgun 33 times on a crowded N train traveling toward the 36th Street station in Brooklyn's Sunset Park neighborhood. The attack left 29 people injured, including 10 who were shot, though none of the injuries appeared to be life-threatening, officials said. Five of the victims were young people commuting to school, New York Gov. Kathy Hochul said.

The motive of the shooting is not yet known.

James was charged in federal court with violating a law that prohibits terrorist and other violent attacks against a mass transportation system, according to Breon Peace, US Attorney for the Eastern District of New York. If convicted, he could spend life in prison, Peace said. He was in federal custody Wednesday afternoon.

James will have his initial court appearance Thursday, according to a spokesperson for the US Attorney's Office for the Eastern District of New York.

James had nine prior arrests in New York dating from 1992 to 1998, including possession of burglary tools, criminal sex act, and theft of service, NYPD Chief of Detectives James Essig said. He also had three arrests in New Jersey in 1991, 1992 and 2007 for trespassing, larceny and disorderly conduct, Essig said.

Wednesday's arrest came hours after officials elevated James from a "person of interest" to a suspect - and shortly after the city issued an emergency alert to residents saying James was "wanted" and asking for tips.

James has also been linked to multiple rambling videos posted on a YouTube channel. He documented his travel from Wisconsin to the Northeast in a series of videos in recent weeks. James talked about violence and mass shootings in the videos, including one uploaded Monday in which he said he's thought about killing people who have presumably hurt him.