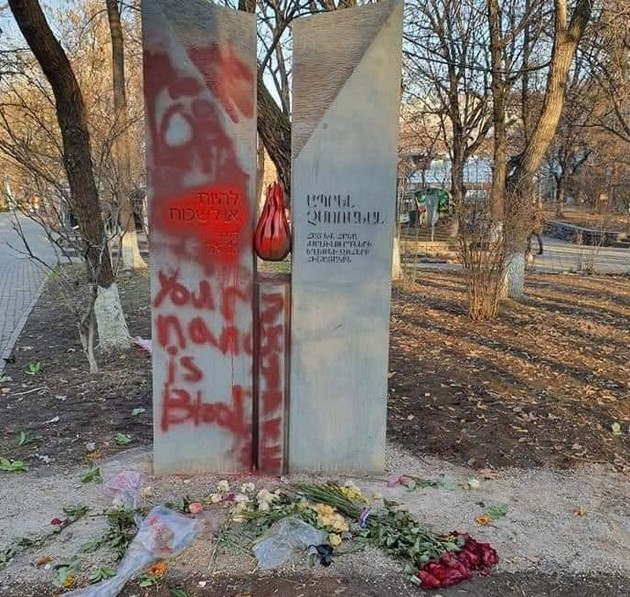 A memorial to the victims of the Holocaust was desecrated in the center of Yerevan, chairman of the International Public Organization for Humanitarian Development Tsovinar Kostanyan wrote on Facebook, posting a photo of the monument, which became a victim of vandals.

The monument dedicated to the memory of the Holocaust victims was red spray painted with the words "Your name is blood".

Police were investigating what appeared to be an act of vandalism.

The photo testifies to the desecration of the monument by supporters of Armenian nationalism, since the right part of the sculptural composition - a stele dedicated to the victims of the tragic events of 1915 in Ottoman Turkey (represented by nationalist ideologists as the "Armenian genocide"), wasn't vandalized. Initially, the monument was erected precisely as an element of propaganda of a nationalist view of those events in an attempt to equate them with the Holocaust.

The attack on the monument may be related to the dissatisfaction of the supporters of the Karabakh occupation with the fact that the Azerbaijani army used, among other things, Israeli-made weapons during the Second Karabakh war. Thus, the nationalists once again showed their true colors: the memory of the Holocaust victims is of no value to them.