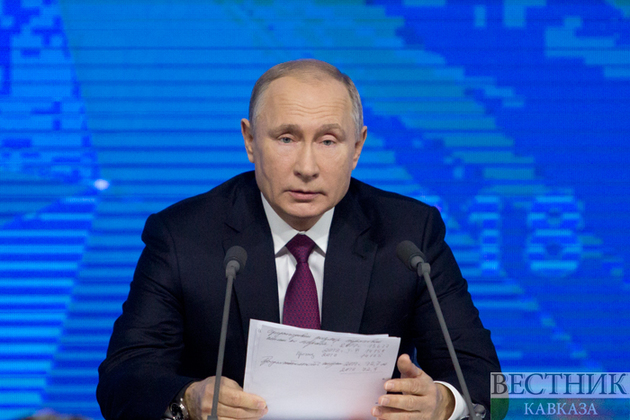 "The President has approved the Naval Doctrine of the Russian Federation, which is aimed at ensuring the implementation of the national naval policy," the statement reads. The new document was posted on the Russian government’s legal information web portal.

"Russia’s new Maritime Doctrine has been approved. We openly designated the boundaries and areas of Russia’s national interests, both economic and vital strategic areas. First of all, these are our Arctic waters, the waters of the Black, Okhotsk and Bering Seas, the Baltic and Kuril straits. We will firmly provide for their protection by all means," Putin stressed.

As the Russian leader pointed out, "the Navy’s capabilities are a key word here." "It is capable of swiftly counteracting all those who will venture to encroach on our sovereignty and freedom and accomplishes strategic tasks successfully and with honor on our country’s frontiers and in any part of the World Ocean," he said.

The latest developments require Russia’s adequate and decisive actions, the Russian president pointed out. "The present-day conditions require that we take adequate, prompt and decisive actions. I am certain that the current generation of sailors and officers is the Fatherland’s reliable and enduring support. For all of us, the Motherland is a sacred notion and its protection is the lofty duty and the essence of life for each of us," Putin emphasized.

The delivery of the cutting-edge Tsirkon hypersonic missile systems to the Russian Armed Forces will begin in the coming months and the frigate Admiral Gorshkov will be the first carrier of these formidable weapons, the Russian leader said.

The Russian Navy is constantly improving its armaments, Putin pointed out. "It will suffice to mention the latest and world’s unrivaled Tsirkon hypersonic missile systems, for which no obstacles exist," the Russian leader stressed.

"Their delivery to the Russian Armed Forces will begin in the coming months. The frigate Admiral Gorshkov will be the first to assume combat alert with these formidable weapons on its board. The area of the operation of this warship outfitted with the Tsirkon hypersonic missiles will be chosen proceeding from the interests of ensuring Russia’s security," Putin said.

The new doctrine also identifies the expansion of the NATO military infrastructure to the Russian borders and the growing number of the military bloc’s drills in the seas adjacent to Russian territory as major security threats.

The new doctrine points to the attempts by the United States and its allies to limit Russia’s access to the World Ocean’s resources and vitally important sea transportation lanes and the US desire to achieve the overwhelming supremacy of its Navy.

Russia’s new Maritime Doctrine stipulates stepping up activities in the Arctic, the document suggests. "The new doctrine envisages "diversifying and stepping up maritime activity on the Spitsbergen, Franz Josef Land and Novaya Zemlya archipelagoes and Wrangel Island," the document says.

Russia will be ramping up the Navy’s operational capabilities to ensure national security and protect its interests in the World Ocean, as follows from the new Maritime Doctrine. "The strategic goals of the national maritime policy are as follows: raising the Navy’s operational (combat) capabilities for ensuring national security of the Russian Federation and protecting its national interests in the World Ocean," the document says.

Another strategic objective is to raise the efficiency of defending and protecting the state maritime borders of the Russian Federation, the document says.

Russia’s new Maritime Doctrine stipulates developing the shipbuilding industry in the Far East, in particular, for building aircraft carriers, as follows from the document. "Developing a modern, hi-tech shipbuilding industry in the Far East designed for building large-tonnage vessels (in particular, for the Arctic’s development) and advanced aircraft carriers for the Navy," the document reads.

NATO’s expansion to Russian borders is unacceptable in Moscow’s relations with the military bloc, as follows from the new Maritime Doctrine. "NATO’s plans of moving its military infrastructure close to the Russian borders and the alliance’s attempts to assume global functions continue to be unacceptable for the Russian Federation and remain a determining factor in its relations with NATO," the document reads.

As the doctrine specifies, Russia’s national maritime policy in the Atlantic region is shaped taking into account the existence of NATO whose activity "is aimed at direct confrontation with the Russian Federation and its allies."

"The national interests of the Russian Federation as a great sea power extend to the entire World Ocean and the Caspian Sea. They are shaped taking into account challenges and threats to Russia’s national security in the World Ocean, generally-recognized principles and norms of international law, Russia’s international treaties, and also considering the sovereignty and national interests of other states," says the document posted on the Russian government’s legal information web portal.

Under the new doctrine, Russia’s national interests in the World Ocean envisage ensuring the country’s independence, state and territorial integrity and the inviolability of its sovereignty, keeping its status as a great sea power, developing the maritime potential and strengthening its defense capability, providing for free shipping, fishing and scientific exploration, the safe operation of sea pipeline systems and environmental safety and developing the Arctic zone and the Northern Sea Route.

"Protecting Russia’s national interests in the World Ocean is a top state priority," the document reads.

Russia’s new Maritime Doctrine divides the areas of ensuring Russia’s interests in the World Ocean into the ‘vitally important,’ ‘important’ and ‘other’ categories.

The first group covers the areas that "are directly related to the development of the state, the protection of its sovereignty and territorial integrity, strengthening its defense and that exert critical influence on the country’s social and economic development."

These embrace Russia’s internal sea waters and its territorial sea, the exclusive economic zone and its continental shelf, the Arctic basin, including the waters of the Northern Sea Route, the waters of the Sea of Okhotsk and the Russian sector of the Caspian Sea, according to the document.

‘Important’ areas are defined as those "that have considerable influence on Russia’s economic development, the well-being of its population and national security, and also on maintaining the state’s strategic and regional security."

In particular, these areas cover the waters adjacent to the Russian coastline, including the Sea of Azov and the Black Sea, the eastern Mediterranean, the Black Sea, Baltic and Kuril straits and world transportation routes, the new doctrine specifies.

"In order to protect its national interests in the World Ocean, Russia exercises its indisputable right to the presence of the Navy’s forces (troops) and their use in strict compliance with Russia’s legislation, its international treaties and norms of international law," the document reads.

"Russia’s implementation of its independent foreign and domestic policy causes counteraction from the United States and its allies that are seeking to preserve their dominance in the world, including in the World Ocean. Their policy of containing Russia envisages exerting political, economic, military and information pressure on it," according to the new doctrine.

Under the document, the country is developing amid existing and new threats that are related, first and foremost, to Russia’s geopolitical position and its role in global politics."

"The force factor does not abate in international relations. The leading world powers that possess the substantial naval potential and a developed system of basing keep building up their naval presence in geopolitically important areas of the World Ocean, including in the waters of the oceans and seas adjacent to Russian territory," the new doctrine reads.