30th anniversary of Grozny events: Soviet power was toppled within a month 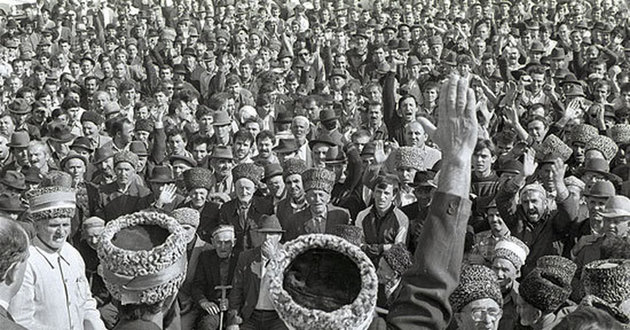 30 years ago, a new hot spot appeared on the USSR map- the Chechen-Ingush Soviet Socialist Autonomous Republic. At that time, in Moscow, the State Committee on the State of Emergency attempted to seize power in the country: on August 23, the President of Russia signed a decree on the dissolution of the CPSU, the President of the USSR appointed new security ministers to replace arrested ones and Muscovites demolished a monument to Dzerzhinsky on Lubyanka.

Those days, Grozny was also boiling: a monument to Lenin was removed, protesters at an indefinite rally demanded the resignation of the republic's leadership. The blood was not yet spilt, but the situation was already tense. Moscow had no time to resolve Russian regions’ issues. The work of the State Committee on the State of Emergency was caught up by the RSFSR leadership - the power of Mikhail Gorbachev was vanishing, Yeltsin was strengthening his positions in the Kremlin. On August 23, he demanded that Gorbachev coordinate all key personnel appointments with him.

In Grozny, supporters of General Dzhokhar Dudayev - the All-National Congress of the Chechen People (NCChP) literally stormed the political arena. On August 22, they surrounded the republican television, forcing to provide a live broadcast to the general. Dudayev demanded the dissolution of the Supreme Soviet of the Chechen-Ingush Autonomous Soviet Socialist Republic, the adoption of a new Constitution and law on citizenship on the territory of Chechnya, as well as direct elections of the new leadership.

On August 23, the protesters actually seized the Supreme Soviet, the government of the republic, television, radio and the airport. Law enforcement agencies did not even try to prevent these seizures.

But there was still hope for a compromise. The Executive Committee of the NCChP, headed by General Dzhokhar Dudayev, and representatives of the Supreme Soviet of the Chechen-Ingush ASSR, headed by  Doku Zavgayev, created a conciliation commission. Options for overcoming the crisis were proposed. An extraordinary session of the Supreme Soviet was planned to resolve the problems in a legal way, but the protesters supporting the NCChP did not accept this option. They demanded the unconditional resignation of Zavgaev, who eventually left his post on September 15. And before that, on September 6, Dudayev's ‘national guards’ stormed the meeting room of the Supreme Soviet and beat 40 deputies.

Party and Soviet structures of Checheno-Ingushetia were completely destroyed within a month after the failure of the State Committee on the State of Emergency. Eventually, the republic turned into a rebellious region. "In August 1991, the Soviet and federal leadership had no time for Chechnya, as well as for Dagestan and the entire North Caucasus. Moscow was preoccupied by power splitting. Leaders of social movements in Chechnya took advantage of this, squeezing the maximum result out of the situation," political analyst Eduard Urazaev told Vestnik Kavkaza. ”In the Chechen society that survived deportation, there was a powerful anti-Soviet and anti-communist charge, which became the driving force behind the process.”

Eduard Urazaev recalled that perestroika stirred up the intelligentsia in Checheno-Ingushetia that created democratic social movements. “Later they were joined by former law enforcement officers. Sufficiently stable and mobile social groups were formed. The legitimate Soviet authorities of the republic could not rely on a weakened Moscow, they had to independently manoeuvre between different groups. The Soviet and federal leadership behaved contradictory. Separatists managed to seize weapons and then power on the territory of Chechnya. Their armed structures were well organized. The negotiations did not yield anything, since the new de facto authorities of Chechnya raised the issue of giving the republic the status of a Union within the USSR. This issue was beyond the capabilities of the federal leadership. All this resulted in a confrontation between the new democratic leaders of Russia and the Chechen separatists, "Urazaev stressed.

According to the political analyst, the public leaders of Chechnya began the struggle against the Soviet regime with democratic mottos. It was the democratic movements that were popular in the Republic by the end of August 1991. But later, many social forces adopted Islam and imposed Sharia law, which only increased the gap between Grozny and Moscow. A whole complex of contradictions led to military campaigns on the territory of Chechnya, which brought grief and suffering to tens of thousands of people.

Vladimir Vorsobin: I was impressed by the goodwill towards Russians in Chechnya