Are the Armenian nationalists against the CSTO? 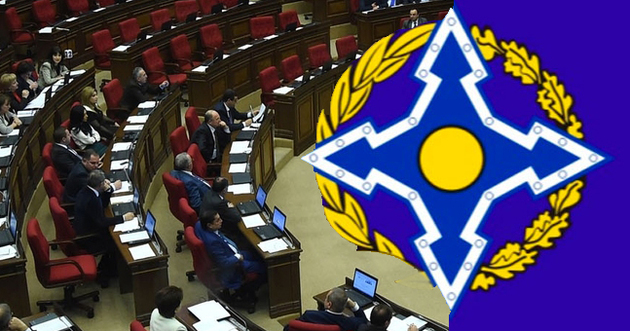 The situation in Kazakhstan has prompted the CSTO leadership to deploy, for the first time in the organization’s history, a limited military contingent in order to stabilize the republic. In addition to the servicemen of Russia, Belarus and Tajikistan, up to a hundred Armenian soldiers were also sent to the special operation zone. The mission of the CSTO countries in Kazakhstan is to protect socially significant institutions and infrastructure.

The decision to send Armenian military personnel was made by the Prime Minister of Armenia Nikol Pashinyan, who this year holds the post of chairman of the CSTO Collective Security Council. The parliamentary opposition's reaction was not long in coming. Nationalists rushed to criticize Pashinyan, seeing political uncertainty in the prime minister's decision and a desire to retain power by all means. Ishkhan Saghatelyan, Deputy Speaker of the National Assembly, deputy from the "Armenia" faction, said this in an interview with the Armenian news agency NEWS.am. Soon on his Facebook page Saghatelyan was supported by his fellow party member Artur Kazinyan, who called Kazakhstan "an unfriendly country" that didn't need to be helped, thereby "showing it its place".

The faction of nationalists, where the activists "Dashnaktsutyun" are comfortably accommodated, vulgarize the idea of the principles of the CSTO functioning. The revanchists indirectly accuse the collective security structures of inaction during the Second Karabakh War, hinting at the alleged special status of Kazakhstan among the members of the organization. Despite the fact that the CSTO charter doesn't imply support for the unrecognized republics, as well as patronage of certain pocket projects of local separatism, the revanchists hope to cast a shadow on the reputation of the organization, which, in their opinion, didn't fulfill its obligations in 2020-2021.

The parliamentary opposition maliciously forms an erroneous idea of ​​the mechanisms of collective security, which, according to the nationalists, should serve the interests of Armenian politics. Apparently, the Armenian populists don't know that the CSTO principles can't be directed against the sovereignty and territorial integrity of other states, thereby ignoring the generally recognized principles of international law.

The rhetoric of the members of the "Armenia" faction looks extremely awkward, since it contradicts the principles of countering the transnational threat. This time, the nationalists decided to reconsider the significance of the CSTO activities as a security system. The manipulative policy of the opposition is fueling public interest to pay attention to the events of October-November 2020 again by spreading the conspiracy myth of the current political elite. Thus, the nationalists hope to shake the Armenian public so that it can express a vote of no confidence not only in the Pashinyan government, but also in the Russian military, with whom the Armenian prime minister is forced to cooperate and who contribute to the process of delimitation and demarcation of the Armenian-Azerbaijani border.

Given the importance of the Russian army in Armenia, it may seem that the revanchist policy lacks common sense. However, if we remember that it's the Russian peacekeeping contingent in Karabakh that plays one of the key roles in the post-war settlement process, contributes to the maintenance of peace and the sovereignty of the South Caucasian republics, one can suggest why the nationalist propaganda began a cautious anti-Russian rhetoric. Nationalists will not be able to extend their political longevity in the space of Armenian politics in the conditions of new post-war realities and a new foreign policy doctrine. They will quickly find themselves on the sidelines of Armenian reality, finally establishing themselves as a marginal minority. Perhaps that is why the members of the "Armenia" and "I Have Honour" factions express imaginary concern about the fate of the Armenian military in the hope of enlisting the sympathy of the Armenian voter, who must believe once again that Armenia has no allies, friends and neighbours, but only has weapons and a need in national consolidation.