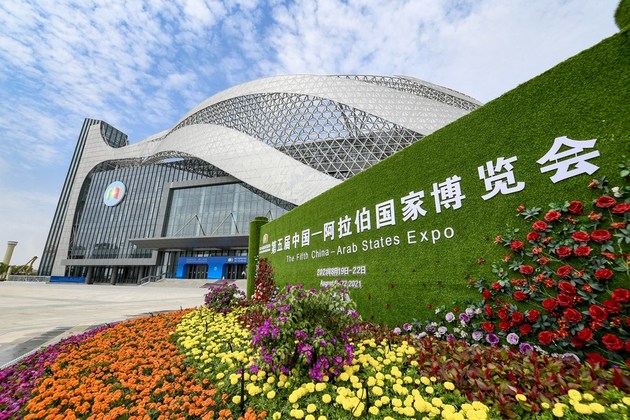 Though the energy sector has been underpinning China-Arab trade ties, cross-border e-commerce has increasingly been turned to as a vital thoroughfare linking Arab states and their largest trading partner, according to participants in a major interregional expo, which concluded on Sunday in Northwest China's Ningxia Hui Autonomous Region, a trailblazer in building the "online Silk Road."

Cross-border e-commerce was arguably among the most attention-grabbing topics at the fifth China-Arab States Expo, which was held both in-person and online for the first time amid the COVID-19 pandemic, with over 1,000 domestic and overseas businesses registering as exhibitors this year, People's Daily Online writes. "Cross-border e-commerce has been developing rapidly, and I think it can be a very efficient way for Lebanese products to be sold in China," the Xinhua News Agency reported over the weekend, citing Joseph Tannous, economic attaché of the Lebanese embassy in Beijing.

Among the Arab businesses attending the expo online were 15 Lebanese firms, which showcased items including red wine and olive oil. "At the moment, we are working to create the first Lebanese online cross-border e-commerce shop in China. We hope this boutique will regroup many of Lebanon's high-quality products in China," Tannous said. "I hope in the near future more and more Lebanese products will find their way to Chinese consumers." As the permanent host of the interregional expo, Ningxia has been positioned to pioneer efforts to build the online Silk Road as part of the Belt and Road Initiative, especially after a pilot zone for cross-border e-commerce was approved in the autonomous region in late 2019.

The pilot program has attracted cross-border traders as well as incubated many start-ups that are eager to capitalize on the burgeoning trade via multiple cross-border conduits, Sun Zhenghao, commercial manager of the Xingqing Digital Economy Industrial Park in Yinchuan, told the Global Times on the sidelines of the expo.

Over 180 cross-border e-commerce companies have been either introduced or incubated in Ningxia, with transactions having topped 300 million yuan ($46.14 million). Preferential policies in the autonomous region, where an economic inland pilot zone was approved in 2012 with the establishment of a comprehensive bonded area in Yinchuan, capital of Ningxia, are considered to have laid the groundwork for Ningxia's rise as the online Silk Road hub.

The bonded area adjacent to the international airport in Yinchuan netted 9.34 billion yuan in exports and imports in 2019, up 28.5 percent year-on-year, accounting for 38.81 percent of Ningxia's total foreign trade, official data showed.

The local government went a step further, green-lighting the creation of an international express distribution center within the bonded area at the end of 2016. The distribution center became officially operational in May 2017. The availability of such facilities put an end to sending international shipments from Ningxia to other provinces and cities for customs clearance, according to Sun, counting on efficient customs clearance as a springboard for a cross-border e-commerce boom expected between China and Arab states. At a booth where medical supplies such as face masks were displayed during the expo, Zhao Bin, general manager of Guangdong Jiayongyuan International Trade Co, told the Global Times that his company has plans to foray into the Saudi Arabian market, where a rising number of Chinese businesses eye a foothold via localizing their operations.

"Saudi Arabia, exemplifying the Arab community, takes a realistic stance when it comes to its China policy, having extensively cooperated with China, notably in energy," Zhao said, describing cross-border trade as one of the arenas beyond energy where businesses from the two countries can team up.

The availability of broad-ranging products from Chinese traders appeals to the Saudi Arabian market and such traders, if capable of tying up with local partners and building physical footprints in Saudi Arabia, would have access to local financing programs that are quite cost-effective and could easily scale up their operations, Zhao noted. Buoyed by such inspiring prospects, Hao Xueqiong, a Yinchuan-based cross-border e-commerce veteran, told the Global Times that his company, whose overseas outreach now focuses on Latin America, is turning attention to Arab states in hopes of getting a tailwind from the online Silk Road.

An expansion into Arab states - where traditional Chinese medicine herbs have become increasingly popular - also prompted interest of Chao Zhuduo, founder of a company in Pengyang county of Guyuan in Ningxia, which specializes in mugwort cultivation and processing. His company employs roughly 2,000 people including local farmers attending to mugwort cultivation, Chao told the Global Times inside the company's booth at the expo, where various mugwort-based healthcare products were on show, rendering it one of the most-visited attractions. The company raked in about 60 million yuan in output in 2020, mainly through domestic online vendors and livestreaming channels, he disclosed, expecting his mugwort business to make a fortune in the Arab world via cross-border e-commerce. Demand for traditional Chinese medicine is on the rise, especially in Saudi Arabia and Yemen, with an average annual growth rate of nearly 15 percent, media reports said.

China secures a footing in the Middle East