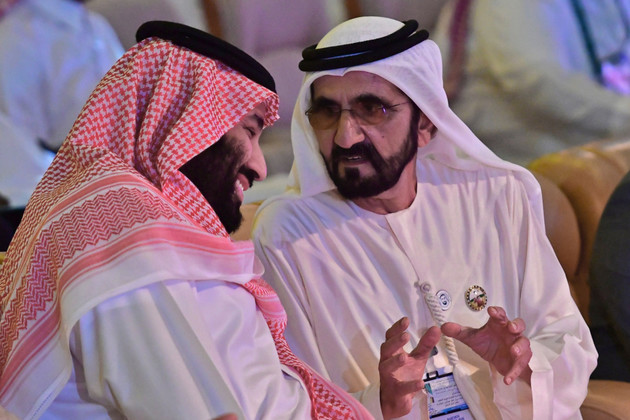 After years of closely cooperating on everything from Iran to oil, the Arab Gulf is entering a new era of wariness, Foreign Policy writes. The once closely coordinated and tightly knit Saudi-Emirati relationship is fraying. A cascade of policy divergences has emerged between Riyadh and Abu Dhabi over the past year, and more acutely over the past weeks.

The long list of differences includes attitudes toward the war in Yemen, the pace of reconciliation with Qatar after a three-and-a-half-year rift, normalization with Israel and the Abraham Accords, managing ties with Turkey, OPEC production quotas, Iran strategy, and cross-border trade. In truth, the tensions between Riyadh and Abu Dhabi are nothing new. They were an on-again, off-again feature of GCC politics decades before the 2011 Arab uprisings. These differences were often papered over because of shared concerns stemming from Iranian regional expansion and the threat from political Islam. That these challenges are resurfacing reminds that intra-Gulf competition has long underpinned the GCC.

It’s not a coincidence that the bumpy new political dynamics coincided with a generational change in leadership, with the passing of Saudi Arabia’s King Abdullah (in 2015), Oman’s Sultan Qaboos (in 2020), and Kuwait’s Sheikh Sabah (in 2020) and the emergence of younger leaders on the political scene including Saudi Crown Prince Mohammad bin Salman, Oman’s Sultan Haitham, and Qatar’s Emir Tamim bin Hamad. (The UAE’s Crown Prince Mohamed bin Zayed’s arrival also belongs to the new generation, though he emerged a decade earlier in 2005.)

But it was the 2011 Arab uprisings that marked a turning point in GCC relations. The domino effect of regional protests, which took hold in Bahrain, led Gulf Arab states to cooperate more closely on tackling what they perceived to be shared threats to the regional order. Sending tanks to quell protests in Bahrain in March 2011 gave a clear indication that neither Saudi Arabia nor the UAE would allow uprisings in its own neighborhood.

Though badged as a GCC initiative, the move served as an early marker for closer Emirati-Saudi collaboration, which became manifest in Syria and Yemen and turned towards Qatar in 2017. But through this period, despite supporting the GCC position in Bahrain, Doha (which did not see political Islam as equally destabilizing) charted its own course that ran counter to Saudi-Emirati activism.

The rift that has come to define, and effectively end, the GCC is the blockade of Qatar, imposed in 2017 by Saudi Arabia, the UAE, and Bahrain. The three states imposed 13 demands on Doha—including ending diplomatic ties with Iran, closing down Al Jazeera, and removing Turkish troops from Qatari soil—and closed their borders and cut diplomatic ties for three and a half years in an unsuccessful effort to bring Qatar to heel. The dispute was only resolved in January 2021 following Kuwaiti mediation.

During the Qatar crisis, it became fashionable to talk once again about the demise of the GCC as an institution, and its seeming replacement by the burgeoning bilateral relationship between Riyadh and Abu Dhabi. But, not long thereafter, relations between Saudi Arabia and the UAE began to reveal some strain.

Abu Dhabi’s 2020 military withdrawal from the war in Yemen and its support for local proxy groups such as the Southern Transitional Council, which is believed to have longer term secessionist ambitions, put it at odds with Riyadh, which is seeking a ceasefire and unified peacebuilding effort. And in 2019, during Tehran’s summer of escalation designed to push back against maximum pressure sanctions, Abu Dhabi tactically reversed course and began a backchannel outreach with Iran; meanwhile, Riyadh not only suffered from brazen Iran-backed attacks on its oil facilities Abqaiq and Khurais but also continued to intercept Houthis drones and missiles from Yemen, as well.

The September 2020 Abraham Accords also revealed glaring differences in the states’ strategies towards Israel. The UAE, in seeking to benefit from the commercial and strategic opportunities alongside closer cooperation with Washington, has tethered itself tightly and openly to the agreement. While Riyadh has long maintained quiet behind the scenes ties with Israel, it has taken a more cautious approach recommitting to the Palestine cause, as the only pathway to normalization. The UAE continues to tread lightly toward Ankara, while again Riyadh has charted a course of de-escalation.

Meanwhile, Saudi Arabia has sought to position itself as the new hub for the Gulf region in direct competition with its neighbors, demanding that international companies maintain offices in the Kingdom. Riyadh has also amended its tariff rules targeting items produced in free trade zones as well as goods manufactured in Israel. The drama over OPEC+ production quotas, in which Abu Dhabi took a proactive approach to increase its production baseline as a condition of extending the current deal, is yet another example of the growing competition. Lack of coordination can also be seen in the states’ varying environmental policies.

Such differences are increasingly evident throughout the GCC. Although Qatar has reconciled with Saudi Arabia and its efforts to do so with the UAE and Bahrain are advancing (albeit slowly), it will likely remain an outlier and fiercely independent, continuing to march to its own drum. Kuwait remains faithful to its Gulf Arab partners and the overall GCC project, but has been left at the altar contemplating its next moves. Meanwhile, Muscat is being wooed by and is drawing closer to Riyadh (seen through Sultan Haitham’s recent visit there); and Bahrain is getting ever nearer to Abu Dhabi.

The fundamental problem for the GCC is that the security narrative which was the glue that once stuck together the collective interests and political narratives of all six states has come undone, even though the threat from Iran remains. National interests which include economic diversification and domestic security are superseding GCC ones leading countries like the UAE and Saudi Arabia to chart their own path.

With strong familial, tribal, and commercial ties binding the GCC states and citizenries together, the edifice of coordination among the six states will no doubt continue. But the trend towards transactionalism that has taken root this year will drive the GCC states’ political, commercial, and regional policy decisions for many years to come, and affect their national political, financial, business, and energy trajectories. Most likely, each will remain committed to the concept and basic functioning of the GCC—but at the same time, they will want to go their own way.

This will not only have a significant impact on the GCC, but also on bilateral relations between member states, especially as they themselves strike up new partnerships with other regional and global players. Indeed, recent bilateral moves to strengthen ties with China, Russia, and India prove as much. The new era of relations within the GCC will also affect Washington’s ability to nurture consensus among the bloc—which is to say, there may be much less consensus than the world had recently gotten used to.

Gulf Cooperation Council is not afraid of conflicts