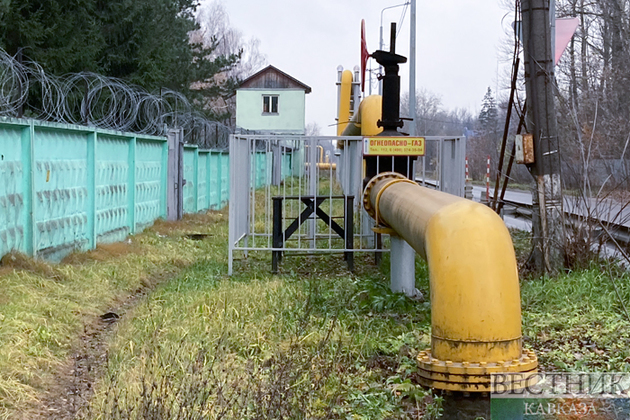 Faced with the potential of Russian gas supply disruption amid continued concerns over Ukraine, the European Commission is on a mission to look for additional gas deliveries from other parts of the world.

The EU and Azerbaijan have agreed to intensify partnerships in both the gas and renewable energy sectors. Simson also thanked Azerbaijan for its efforts to increase gas supplies to Europe through the Southern Gas Corridor. During the negotiations, they discussed the expansion of infrastructure within the framework of the project, the reduction of carbon dioxide and methane emissions. "Azerbaijan is doing everything today to increase gas supplies through Shah Deniz", Simson said. "We look forward to further cooperation within this project with Azerbaijan, as it is strategically important for all EU countries".

Before the meetings in Baku, Simson was crystal clear on the EC's objectives. "I am engaging with partners to explore a possible expansion of supply, in particular LNG". However, S&P Global Platts is wondering how realistic Europe's chances of securing additional supplies are and Simson's diplomacy is designed more to send a signal to Moscow.

"Aside from a few additional Bcms which could be squeezed out of (mainly LNG) exporters, probably only on an emergency basis, there is no substantial, immediately available gas which could compensate for any significant interruption of Russian gas supplies," Jonathan Stern from the Oxford Institute for Energy Studies told S&P Global Platts. "It's hard to believe that European and US politicians don't understand that if any supplier had more gas to sell, then at current prices it would already be selling it".

The European benchmark TTF day-ahead gas price hit an all-time high of Eur182.78/MWh on Dec. 21, a rise of 985% year on year, according to Platts price assessments. Prices have cooled since, though they remain at historic highs. The TTF day-ahead contract was assessed Feb. 2 at Eur76.18/MWh, still a year-on-year increase of 320%.

Qatar's Kaabi also made it clear in a statement following his talks with Simson that additional supply to Europe would have a knock-on effect elsewhere, saying Qatar considered contracts to be "sacrosanct."

It is therefore difficult to imagine that Qatar, the world's biggest LNG exporter in 2021, could consider breaking its contractual supply obligations to its customers in Asia in order to divert cargoes to Europe.

Then there is the question of certainty of demand. Qatar would not want any extra LNG it sends to Europe to end up being re-loaded and sent to other markets. But the re-introduction of so-called "destination clauses" in supply contracts would be problematic in terms of EU competition law. Any legal assessment of new destination clauses would depend on the specific circumstances and the scope of the clauses concerned.

It is LNG though, as Simson said, that is likely to be the only realistic option open to Europe in terms of additional supply.

The US is expanding its LNG export capacity in 2022 and would in theory have more gas to send to Europe, but price is likely to be a bigger factor in whether cargoes go to Asian markets instead. The TTF month-ahead price moved to a premium over the JKM spot Asian LNG price in mid-December, drawing high volumes of LNG to Europe in January. However, the spread flipped back after European gas prices dropped on Feb. 1.

Should Russian flows be disrupted, however, a higher European price would almost certainly be the result, which would likely see more LNG cargoes come to Europe.

Platts Analytics also considers LNG to be the likely main "saving grace" in the event of any Russian supply disruption. "Platts Analytics assumes Russian flows remain relatively low until the start-up of Nord Stream 2 in October, with ongoing tensions on the Ukrainian border keeping prices elevated," managing analyst James Huckstepp said. "However, these high prices are pushing global LNG demand lower via fuel switching and industrial destruction, as liquefaction utilization is also on the rise, with the resulting higher LNG flows to Europe being critical to balancing markets through 2022".

Europe's other pipeline suppliers already appear to be pumping as much gas as they can, with Norwegian deliveries regularly at their capacity of more than 350 million cu m/d in recent months. Norwegian producers have also diverted for export gas that is usually re-injected into fields to aid oil recovery. In the short term, there is little else Norwegian producers can do to supply more to Europe.

Azerbaijan has said it could increase supply to Europe in the event of an emergency, but it is difficult to see how. Supplies from Azerbaijan via the TAP pipeline to Greece, Bulgaria and Italy are already set to flow in 2022 at capacity of some 27 million cu m/d.

Whether there is room in the Turkish system to allow for gas from Azerbaijan to enter Europe at a separate entry point is unclear, not least as Turkey itself is also facing gas shortages after supplies from Iran were cut Jan. 21.

In North Africa, Algeria does have some spare capacity in its pipeline to Italy, and could supply an additional 7 Bcm through the route in 2022, according to Platts Analytics. However, it faces rising domestic gas demand, and has also seen its exports to Spain affected by the closure of the GME line via Morocco since November.

Since the start of the year, Libya has only been sending around 7 million cu m/d to Italy through the Green Stream pipeline -- well down on levels of as much as 20 million cu m/d in 2019 -- but its long-running internal issues mean a short-term increase is unlikely.

Domestic European producers have also been looking to supply as much gas as possible to benefit from the high prices. The biggest EU gas producer, the Netherlands, could supply more gas from its giant Groningen field this year than originally planned, though this is a result of delays to a nitrogen plant rather than a policy shift.

The Dutch government had reduced the quota for the current gas year to 3.9 Bcm, but because of a delay to the start-up of the nitrogen plant at Zuidbroek, Groningen may be allowed to produce up to 7.6 Bcm.

The economy ministry said last month it would decide before April 1 how much gas must come from Groningen in the current gas year, but the government remains steadfast in its position that the field should close completely due to risk of earthquakes associated with drilling.