How CSTO assistance to Kazakhstan affects Organization of Turkic States? 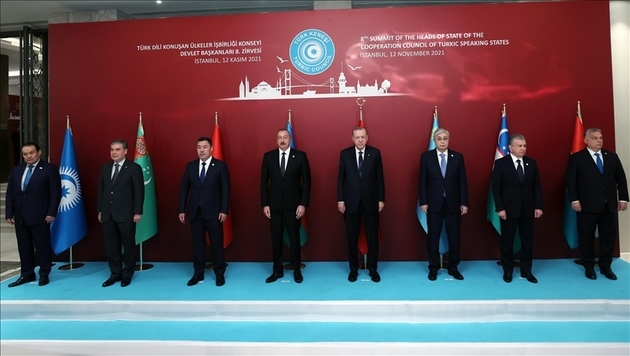 Yesterday, Izvestiya newspaper published an article with a striking headline "Disorganization of the Turkic States. Ankara aims at Kazakhstan." The publication emphasised that the events in Kazakhstan cast doubt on the union of the Turkic countries.

The Organization of Turkic States (OTS), which until recently was called a council, and since the end of 2021, a full-fledged union, includes Turkey and four former USSR countries: Kyrgyzstan, Kazakhstan, Azerbaijan and Uzbekistan. Turkmenistan is an observer. The countries are united by an ethnolinguistic factor: the representative state languages ​​belong to the same Turkic group. Their peoples have common roots, and, historically, the ancestors of the Uzbeks, Turks, Turkmens and other Turkic-speaking peoples came from Altai and then settled throughout Eurasia - from Western China to Moldova. The goal of the OTS  is the development of comprehensive cooperation in a variety of spheres from culture and education to the economy and politics. The union began to form immediately after the collapse of the Soviet Union.

According to some estimates, the creation of the organisation was initiated by Turkey to strengthen its position in Eurasia, according to others, the newly formed countries needed mutual support and saw Turkey and each other as important economic and political partners to confirm their sovereignty. Turkey opened hundreds of Turkish lyceums in these countries, where it trained and cultivated future personnel in the field of construction, education, technology and politics. The Turks also invested heavily, building universities, shopping malls and taking part in energy projects in the oil and gas-rich Turkic-speaking republics. In a word, everyone was a winner. The organization received a great impetus after the end of the Karabakh war.  Erdogan said that it is necessary to change the motto from ”one people - two states", meaning Turkey and Azerbaijan, to "five states - one nation".

Until recently, the integration of these countries was actively developing. Some experts even talked about a possible united defence alliance. But the events in Kazakhstan have raised some issues. The Turkic-speaking countries reacted rather reservedly to the protests in the fraternal country and did not make prompt unambiguous statements in support of President Kassym-Jomart Tokayev. Only Turkey tried to show some activity, but its Foreign Ministry made a rather streamlined statement, saying that the country was following the events and wished peace and tranquillity to the fraternal people. In fact, the OTS took a wait-and-see approach, not supporting either the protesters or Tokayev. Only after Russia, along with its CSTO allies, sent in troops and put things in order in Kazakhstan, Turkey took a clear position.

The day after the emergency CSTO summit, where Tokayev announced the regaining control over the country, an online meeting was held between the foreign ministers of the Turkic countries. The main outcome of the meeting was that the Council of Ministers of the OTS supported Tokayev's decision to carry out reforms and declared its readiness to provide any assistance to Kazakhstan. Turkey's position gives the impression that it had ceded to Russia the right to play the leading role in Central Asia. Turkish experts and opposition literally attacked Erdogan and accused him of "surrendering Kazakhstan."

Ahmet Davutoglu, the former prime minister and now one of the main opposition figures tweeted: ”It is worrying that in connection with the events [Kazakhstan] turned to the Collective Security Treaty Organization chaired by Armenia for support. The historical obligation of the Organization of the Turkic states is to make the necessary contribution to overcoming tensions in Kazakhstan, respecting its internal affairs. The fact that so far sufficient steps have not been taken in this direction indicates a weakness in terms of internal solidarity of the Turkic world."

The weakness of Turkey and the union was also underlined by some Russian experts. Thus, Vladimir Avatkov noted that for Turkey, the introduction of the CSTO forces was a surprise, since it had long wanted to create collective security for the Turkic countries. And, in fact, now we are witnessing "a breakdown in the foundation of the Turkish-centric Turan after Syria and Crimea." We asked experts on the region, whether the events in Kazakhstan really weakened Turkey's positions and dealt a blow to the organization of the Turkic countries.

Zhanna Tulindinova, a political observer from Kazakhstan, believes that her country will now get even closer to Russia, but this will not be at the expense of cooperation with the Turkic states. "Against the background of turning to its CSTO partners with a request to introduce a peacekeeping contingent, Kazakhstan will take a tilt in favour of Eurasian and military integration within the framework of the CSTO. However, I believe that the multi-vector approach still remains the basis of Kazakhstan's foreign policy," the expert stressed.

"I would expect some initiatives, projects from Kazakhstan in the near future. These could be symbolic gestures in favour of strengthening integration within the OTS framework. This is necessary in order to eliminate the imbalances that have arisen and calm down the society, that despite Tokayev’s authority,  perceived somewhat ambiguously the CSTO peacekeeping contingent," Zhanna Tulindinova explained.

Director of the Center for Strategic Studies under the President of the Republic of Azerbaijan Farhad Mammadov believes that the organization will draw conclusions from the events in Kazakhstan and improve its development. "I do not think that the developments in Kazakhstan will somehow negatively affect the activities of the Organization of Turkic States since Kazakhstan itself was the founder of this organization. All the projects and initiatives that exist and that were adopted last year at the summit of the leaders are more of an economic and humanitarian nature, they are mutually beneficial. In most of them, Kazakhstan is one of the main participants both in terms of logistics, development of information technologies and simplification of red tape,” he recalled.

"On the contrary, I think the events in Kazakhstan will make the leaders of the Turkic states think about the formation of new institutions for further interaction, such as information centres, and strengthening relations in the defence sphere. Thus, everything that increases the subjectivity of states and strengthens their defence capabilities," Mammadov said in an interview with Vestnik Kavkaza.

Stanislav Pritchin, the senior researcher at the Center for Post-Soviet Studies at the IMEMO RAS, is sure that it is not entirely correct to discuss the strengthening or weakening of Turkey and its union because the OTS is not obliged to address security issues. "It is not entirely correct to draw conclusions and link the Organization of Turkic States with the events in Kazakhstan, because, on the one hand, we have seen that the processes there are primarily due to internal issues and motivations, respectively, some external factor is minimal here. And on the other hand, how the events developed later, and who was involved in their settlement - this also concerns the OTS to a lesser extent," the expert noted.

"These events in Kazakhstan and their resolution, it seems to me, do not lead to the strengthening or weakening of the organization, because it has its own agenda and roadmap for development. In principle, it does not imply any serious steps by the partners in organizing military assistance to participating members in case of a crisis. There is no agenda as such, and there is no corresponding contractual basis, unlike, for example, in the CSTO. The organization is only at the beginning of its journey, so it is difficult to predict now how much it can strengthen or weaken due to the recent events,” Pritchin said.

We are yet to see what future awaits the Organisation of the Turkic States. My opinion is that Russia did not force anyone out of Central Asia. Russia has always been there both within the framework of the CSTO and the EAEU and remains in the region to this day. The main question now is whether Tokayev will be able to build a new system and whether it will be durable. If yes, then Kazakhstan will continue to strengthen its ties with the Eurasian world and with Russia. At the same time, it will not prevent him from having close cultural and economic ties with the Turkic countries.

Probably, in the long run, Russia will have a military-strategic advantage, which is natural due to the kilometres-long common Kazakhstan’s border exactly with the Russian Federation, and not with Turkey. Geography cannot be ignored. But Turkey will take advantage in trade and investment projects. And this is beneficial for Russia since we would not want Kazakhstan to be influenced too much by China. Let there be our shield, and the money comes from several states at once.

Ilham Aliyev: meetings in Sochi and Prague showed that Karabakh conflict is over