How Europe Fell Out of Love With China 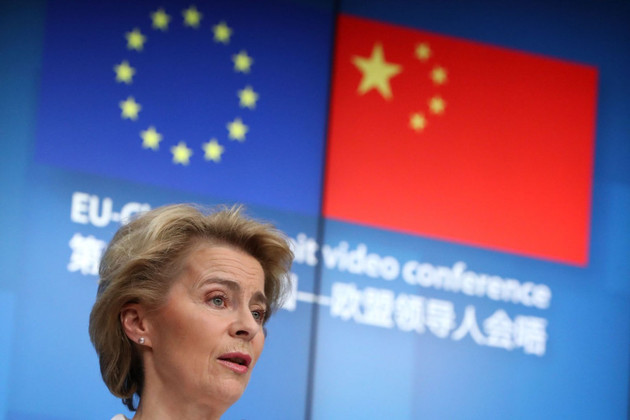 After years of courting closer economic ties with China, the European Union is ratcheting up its rhetoric against Beijing’s heavy-handed approach to the economy and human rights, with many officials describing what they once saw hopefully as a partnership as more of a rivalry. Foreign Policy reports in its article How Europe Fell Out of Love With China that relations between Europe and China got frostier this week, after a long-delayed leaders’ summit ended with no joint communique and prompted tough talk from European Commission President Ursula von der Leyen.

For years, much as the United States did in the past, Europe has sought to nudge China to make reforms in how it trades and does business but has nothing to show for it. Now, European officials openly talk of China as a rival that needs to start making changes—or face increasing restrictions from Beijing’s biggest trading partner.

“We are committed to making swift and substantial progress,” said von der Leyen after the summit, ticking off a litany of unfulfilled Chinese promises on trade, investment, industrial subsidies, climate change, and human rights. “We count on the Chinese leadership to match our level of ambition.”

This week’s summit, and the increasingly terse tone taken by top European leaders, follows a spate of new EU initiatives meant to curb Beijing’s worst excesses. Last week, the EU unveiled a new scheme meant to fight back against China’s use of state subsidies to give its firms an unfair advantage against European rivals; this fall, a long-planned investment screening mechanism meant to shield key European firms and industries from predatory acquisitions will finally be implemented. Both, while nominally directed at all non-EU countries, aim squarely at China.

Taken together, “it gives the impression that the EU wants to show that it is time for a change, time for a recalibration of the relationship, and that it is time for China to give more,” said Frans-Paul van der Putten, an expert on China at the Clingendael Institute, a think tank in the Netherlands.

If many of Europe’s complaints about China sound familiar to those levied by U.S. officials including President Donald Trump in recent years, that’s because they are. But there’s one big difference, for now, in Europe’s reaction to China that still sets it apart from Trump’s scorched-earth approach.

“Europe is much more concerned about China, and there is a much greater sense of urgency that something needs to happen,” van der Putten said. “But there is still a very strong conviction in Europe that there is no future without China—we are not going to ‘decouple’ or have an economic disengagement. You don’t see that in the European mindset.”

For much of the past decade, Europe and China were growing increasingly intertwined economically. Two-way trade in goods and services has grown over the last decade by about 60 percent, to more than half a trillion euros annually. Britain, when it was still part of the EU, literally rolled out the red carpet for Chinese investment, and for the past five years sought to ingratiate itself with Beijing, until starting to reverse course this year. In other parts of Europe, big Chinese investment in ports, railroads, telecommunications, and the power grid offered countries like Greece, Italy, and Portugal much-needed investment—and China a measure of influence inside the now 27-nation bloc. Italy even formally signed on to China’s trillion-dollar “Belt and Road” program of infrastructure investment and even at the height of the COVID-19 pandemic has sought to deepen its relationship with Beijing.

But that very deepening of the economic ties between the two also bred suspicion and concern that China was snapping up some of Europe’s crown jewels. Leaders in France and Germany, in particular, worried that Chinese acquisitions of key companies could undermine national security. Countries across the EU have been torn over whether and how much to allow China’s Huawei to participate in the development of advanced, fifth-generation mobile phone networks. The just-unveiled EU plan to treat foreign industrial subsidies with the same strict rules as the bloc applies internally for illegal state aid is just the latest sign that China’s state-led economic model has tried Europe’s patience too much.

“What China didn’t understand is that by launching national champions and throwing state money at them, that created a lot of hostility all over the world but in Europe in particular—German and French companies feel that they are facing some very unfair competition,” said Philippe Le Corre, an expert on China and Europe at the Harvard Kennedy School. The new anti-subsidies measure, he said, “really says a lot about the shifts in the mood in Europe and the fact that the commission is translating that into action.”

If Europe showed more spine this week, it has been a long time stiffening. Previous EU leaders, for example, launched the investment-screening measure to try to limit China’s ability to snap up critical European firms; this fall, the new mechanism will finally be in place. Likewise, Europe’s new foreign-policy chief, Josep Borrell, speaks unabashedly of China as a “rival” to Europe, sharpening the rhetorical confrontation with Beijing that has been steadily building in recent years.

Nature Food: even a ‘limited’ nuclear war would starve millions of people