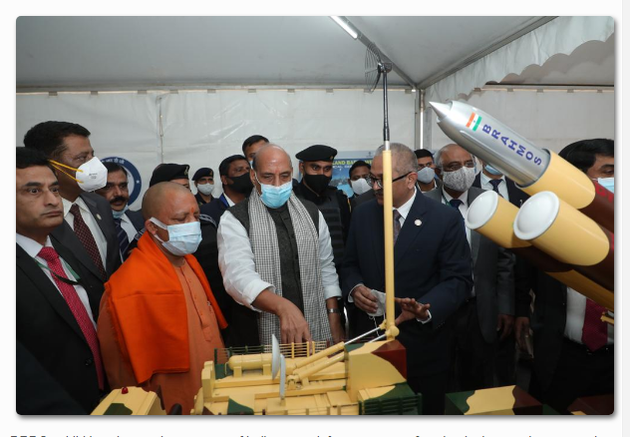 India’s new BrahMos II hypersonic missile may feature technology used in Russia’s Tsirkon hypersonic weapon, a development that will further entrench the two sides’ already deep defense cooperation at a time India faces Western pressure to distance itself from Moscow. According to Asia Times, BrahMos II is jointly developed by India’s Defense and Research Development Organization (DRDO) and Russia’s NPO Mashinostroyeniya, and is the successor to the Brahmos I supersonic cruise missile also jointly developed by the two sides.

BrahMos Aerospace CEO Atul Rane has said that both India and Russia have worked out the basic design for BrahMos II and that it will take five or six years before the first weapons test is staged. He also notes that BrahMos II will not be exported, as India is a party to the Missile Technology Control Regime (MTCR), meaning India can develop missiles with ranges of more than 300 kilometers and a weight of more than 500 kilograms but cannot sell such weapons to third countries.

Despite crippling Western sanctions on Russia’s defense industry imposed in 2014 and this year’s special operation in Ukraine, Rane mentions that these punitive measures have not affected the development of the Brahmos II project. If the BrahMos II project pushes through, it shows that Russia still has trump cards to play to keep its defense industry afloat. In a 2021 Global Affairs journal article, Viljar Veebel notes that Russia can rely on its open and relatively generous arms export policy, proven weapons systems and path dependency to maintain its arms exports. Russia has adeptly played these cards to keep India on its tabs, particularly on hypersonic weapons development. At the same time, India is aware of the potential strategic repercussions of its reliance on Russian weapons and military technology as 60% of its military equipment imports coming from Russia.

Veebel mentions that Russia, unlike Western arms exporters, does not attach limitations or preconditions to its arms sales, and has offered several perks to established partners such as Iran, Syria, Algeria, Egypt, and Libya. These have included better-negotiating terms, loans and quicker deliveries that make it beneficial for these countries to purchase arms from Russia over other suppliers.

In the case of India, Sameer Lalwani and others note in a 2021 article in the Journal of Indo-Pacific Affairs that longstanding Cold War-era ties between India and Russia, their converging geopolitical interests, shared views of a multipolar international order, established technical cooperation and Russia’s motives to influence India’s policymakers and defense planners may explain Russia’s unusually generous arms sales and technology terms with India. They also highlight that Russia has assisted India in several high-level strategic projects, such as refurbishing India’s Vikramaditya carrier and constructing the Arihant, India’s first nuclear-powered ballistic missile submarine (SSBN), which forms the underwater component of India’s strategic nuclear deterrent.

Considering these previous bilateral accomplishments, the Brahmos II may be no exception to this pattern of high-level military cooperation, building on established mechanisms with the BrahMos I supersonic cruise missile. Veebel further notes that one of Russia’s strengths is exporting proven weapons systems, which while substantially less advanced than those of Western manufacturers, are still considered good enough for contemporary conflicts in the developing world. In terms of hypersonic weapons, defense analyst Alexei Ramm notes in a 2022 Izvestia article that US hypersonic weapons may be overly complex, noting the two-stage design of the weapons, which consequently requires the integration of multiple subsystems. This time-consuming process requires a large number of expensive tests. He also notes that Russia’s Tsirkon hypersonic weapon does not require a second stage to function. He ventures, the design simplicity and reliability of Russia’s Tsirkon is likely a significant factor in why India has chosen to cooperate with Russia in developing its BrahMos II hypersonic missile.

Moreover, Veebel also mentions “path dependency” as a reason for India to keep purchasing arms from Russia, despite the threat of Western sanctions. Arms sales do not stop at the transfer of equipment but instead involve purchasing an entire system that includes maintenance, training, provision of spare parts, high-level government-to-government talks, and personnel exchanges. He notes that it is easier and cheaper to rely on existing supply chains and cooperation mechanisms than establish new ones.

Russia has not gained special access to Indian military bases and intelligence facilities. Indeed, India may be harboring deep reservations about the implications of a Russia-China nexus to its hypersonic weapons program. In a 2020 article in the Raksha Anirveda defense magazine, defense analyst Rakesh Simha notes growing Russia-China cooperation in hypersonic weapons research and points out the possibility that Russia may be sharing sensitive technology with China to the detriment of India. He also notes that falling oil prices and Western sanctions may give Russia added incentive to pass on sensitive hypersonic weapons technology to China in exchange for much-needed revenue.

The threat of US sanctions on Russia-India joint defense ventures may have also stoked India’s reservations about its longstanding reliance on Russia. The US Treasury explicitly sanctions NPO Mashinostroyeniya. While the US has not strictly enforced sanctions on India’s DRDO for dealing with Rosoboronexport and NPO Mashinostroyeniya, should the US choose to do so, US dollar-based payments between Russia and India for the BrahMos II project could trigger sanctions. Given this, Simha notes that India is pursuing separate hypersonic weapon projects in parallel to the BrahMos II. For example, he mentions India’s homegrown Hypersonic Technology Demonstrator Vehicle (HSTDV) is funded and researched separately from Brahmos II.