How much Mongolia depends on China 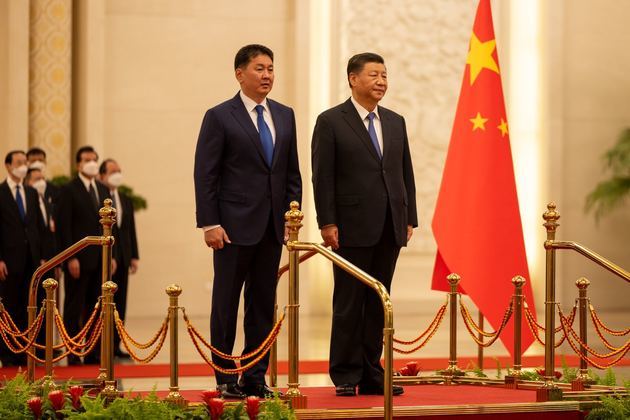 The end of China’s zero COVID policies will allow Ulaanbaatar and Beijing to accelerate the pledges made during President Khurelsukh’s November visit to China, The Diplomat writes.

Mongolian President Khurelsukh Ukhnaa’s latest state visit to Beijing placed a heavy emphasis on China-Mongolia economic ties and thus reflected how Mongolia’s foreign policy supports these endeavors. As Mongolia continues to diversify its mining-dependent economy, Beijing, as its comprehensive strategic partner, will continue to play an active role in investments and developmental projects. On November 28, Khurelsukh held official talks with Chinese President, Xi Jinping. Khurelsukh’s state visit to China marked the second high-level meeting between the two leaders since the outbreak of COVID-19.

Mongolia’s landlocked position naturally forces Ulaanbaatar to maximize trade and economic activities with Beijing China – as one of Mongolia’s two immediate neighbors, and a major economic powerhouse to boot – necessarily has an outsized impact on Mongolia’s own development.

The two countries’ economic relations have been facing challenges since the border closures amid the pandemic. Despite China’s prolonged zero COVID policy, however, the two counties managed to double their 2021 export levels last year and launched new railway developments, such as the 227-kilometer Zuunbayan-Khangi railroad. Mongolia’s economic activities showed a positive outlook during the third quarter of 2022, even though China’s zero COVID policy was still in full effect at the time. According to the Mongol Bank, “Economic activity was relatively stronger than expected in the third quarter of 2022, surpassing the pre-COVID-19 levels.”

In December 2022, the same month China finally lifted its harsh COVID-19 restrictions, Mongolia’s coal exports nearly tripled, going from 1,165 to 2,932 tons. Amid the effort to open borders between Mongolia and China, Beijing requires certain measures to prevent the additional spread of COVID-19. Mongolian tourists and individuals crossing the border to China will need to fill out both paper and online entry forms in addition to showing a PCR test result from within 48 hours of entry. Meanwhile, as COVID-19 rages through a newly reopened China, Mongolia also has concerns about imported cases. Even though reviving economic activities are a top priority for the Mongolian government, there is no guarantee that those returning will be COVID-free.

While these talking points may portend a newer direction between Ulaanbaatar and Beijing, the overall China-Mongolia economic relationship is an ongoing effort on Mongolia’s part and  its trajectory has not diverged notably from previous administrations. For Mongolia, geography will always dictate the country’s economic goals, but it is the administration of the day that will execute certain economic plans. Hence, the bolstering of China-Mongolia economic relations is a never-ending endeavor, only with new twists and mega projects.

China, a major export destination for Mongolian minerals, has invested more in the mining sector than any other developing sector

With parallel growth and development, Mongolia may benefit from major infrastructure projects as long as there is sufficient funding. In 2013, Mongolia and China established a medium- to a long-term strategy to boost economic relations. One of the major challenges for Mongolia was its incomplete infrastructure, which constrains economic activities, particularly maximizing mineral exports. Hence, since 2013, throughout different administrations, improving the basic infrastructure of Mongolia has always been a major investment opportunity for foreign companies. And China, as a major investor, tends to win major infrastructure procurements.

This might explain why the incumbent prime minister, Oyun-Erdene Luvsannamsrai, has pushed to build infrastructure that supports Mongolia’s exports, even though the most direct beneficiary is the mineral sector. The hope is that better infrastructure will bolster overall growth and feed into long-term plans for economic diversification. The Oyun-Erdene administration has been placing heavy emphasis on major infrastructure agreements and the start of project construction as one of the leading sources of economic potential for the country. In his latest press release, the prime minister declared Mongolia as “The Year to Travel 2023-2024.” One of the major policy recommendations is to establish a free-trade zone (FTZ) in government-approved areas to bolster border trade and the development of transit cities and towns such as Zamiin Uud and Erlian. Border trade cities like Erlian survive on Mongolian businesses.

China will uphold its comprehensive strategic partnership with Mongolia and is willing to bolster the two-step strategy, which can provide parallel growth and development in both societies.

Mongolia’s bilateral relationship with China has more economic nuances than political ones. Mongolia’s landlocked position naturally makes it more challenging to access third-neighbor countries. Therefore, Mongolia’s comprehensive strategic partnership with Beijing is a strategic move to maximize the country’s economic potential. With China’s zero COVID policy now in the rearview mirror, Ulaanbaatar will be hoping to maximize gains from the relationship after three years of disruptions.

What is Power of Siberia?