Five reasons why the US-Iran crisis is not over 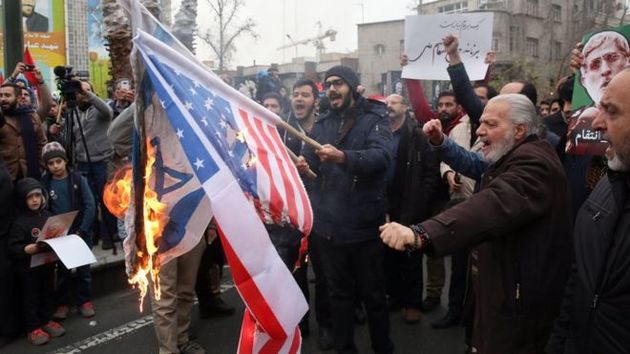 Thankfully, the crisis provoked by the US killing of top Iranian commander Qasem Soleimani has not escalated into a full-scale war. In that sense, there has been de-escalation, BBC writes in the article Iran plane downing: Five reasons why the US-Iran crisis is not over. But none of the basic factors that led these two countries to the brink of war have changed. Here's why this crisis is far from over.

First. De-escalation is only temporary

Iran's leaders - shocked to their very core by the killing of Soleimani - did what they could to strike back. Iran wanted to respond by hitting US targets and it wanted the address of the sender to be clear. Thus, it used missiles fired from within its own territory. But there were practical and political constraints on its actions. It wanted to do something quickly. It was off-balance. And it did not want to start an all-out war. This account, as many Iranian spokesmen have made clear, is not closed.

It has also been suggested that Iran's willingness to admit responsibility for the downing of the Ukrainian passenger plane is another effort to de-escalate tensions. This is wrong. Iran's natural response was to deny any involvement. But when the Americans claimed its intelligence proved the contrary, when Ukrainian investigators found evidence of a missile strike, and when independent investigators proved the veracity of video that showed a plane being shot down, Iran had little choice but to change tack.

Just a few months ago, there was a wave of protests against corruption and the collapsing economy. Look how quickly protests have been revived. This is about damage limitation at home not de-escalation with the Americans.

Why did the US kill Soleimani and attempt to strike at a second senior Iranian official in Yemen? It has claimed - perhaps for legal reasons - that it was acting to prevent a serious imminent attack against US interests. This argument has not convinced many analysts or the president's critics in Washington. It is much more likely that the attacks were an attempt to re-establish some clear line of deterrence. In the short-term this may work. Iran is going to have to calibrate its future actions very carefully.

The US will continue to cripple the Iranian economy. But it has not brought Tehran to the negotiating table to capitulate. Rather, it has emboldened Iran to strike back by mounting a maximum pressure campaign of its own. The US wants to double down on Tehran and significantly reduce the resources it deploys to the region. It probably cannot have both.

Iran's economy may be creaking and many of its citizens may be increasingly unhappy, but this is a "revolutionary regime". It is not suddenly going to abandon power. Groups like Iran's Islamic Revolutionary Guard Corps (IRGC) are far too strong. Their response has been to clamp down at home and to push back against US pressure. That will continue.

Iran's strategic goal is to push the US out of the region, at least in Iraq, and this may be closer to being realised than it was before Soleimani's killing. From the Iranian authorities' perspective at least, Tehran's policy has had many notable successes. It has saved President Bashar al-Assad's regime in Syria and enabled it to open up a new front against Israel. It has a significant influence in Iraq.

Because of the contradictions in President Trump's policy, US allies in the region feel increasingly on their own. The Saudis have been exploring a low-level dialogue with Tehran; Turkey is going its own way and establishing a new relationship with Russia.

Forth. There are contradictions in Iraq's position

The sign pointing to the exit for US troops in Iraq is now looking bolder and brighter than ever. Iraq's provisional government is in crisis having suffered its own wave of popular protest. Many people are unhappy with both the US presence and Iran's influence in the country. A non-binding parliamentary vote has put the issue of a US troop withdrawal firmly on the agenda. This does not mean that the US forces are on their way out tomorrow, but it will require some deft diplomacy to keep them there. Instead, President Trump has threatened to freeze Iraqi government funds in US banks if they force the Americans out.

The US involvement in Iraq matters. When their forces and their allies took on the fighters of Islamic State (banned in Russia) in Iraq it was always seen as a long-term deployment. Once the IS caliphate was destroyed, it was expected US forces would remain there for years. If they are ejected, it makes it much harder to contain any IS resurgence. But it would also make the remaining US presence in eastern Syria untenable because this is largely supported from US bases in Iraq. The debate on the US troop presence is only just beginning - and it is one that if the US loses, Iran probably wins.

Fifth. The nuclear deal is in real trouble

The roots of this latest crisis go back to May 2018 when the Trump Administration abandoned the Iran nuclear deal. Since then, the US has been applying maximum pressure on Iran's economy and Iran has been pursuing a regional pressure campaign of its own by successively renouncing various restrictions imposed by the agreement. If the deal is not dead, then the only reason it remains alive is that nobody other than President Trump is willing to see it collapse. Unless something changes, then it is the beginning of the end.

The deal matters. Prior to the agreement, there was a very real risk of war - with Israel (or perhaps the US and Israel in tandem) likely to attack Iran's nuclear infrastructure. There seems to be no way, despite European efforts, to relieve the economic pressure on Tehran. Eventually the agreement may collapse and, in the meantime, Iran may get closer to sprinting towards the bomb.

Iran orders US to pay compensation for slain nuke scientists