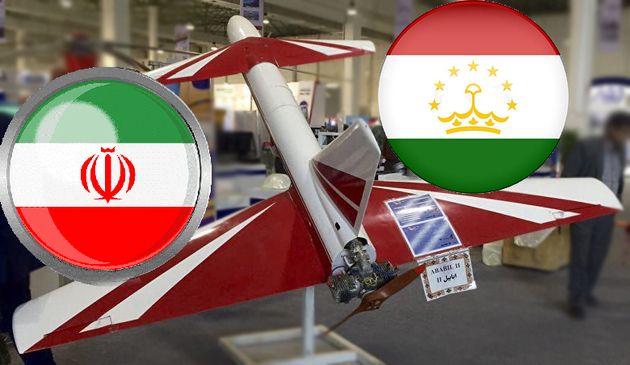 Iran inaugurated a new factory for producing Ababil-2 military drones in the Central Asian country of Tajikistan. During a visit to Tajikistan, Chief of Staff of the Iranian Armed Forces Maj.-Gen. Mohammad Hossein Baqeri inaugurated a factory manufacturing Ababil-2 military drones, Tasnim News says. “The drone factory was inaugurated in [the] capital of Tajikistan, Dushanbe, on Tuesday in a ceremony attended by the top Iranian general and Tajik Minister of Defense Col.-Gen. Sherali Mirzo."  Baqeri says that Iran is now showing it can export military equipment to friendly countries, The Jerusalem Post writes

The Islamic Republic has exported drones in the past, to Venezuela for instance, but this factory would appear to be a milestone. The media are taking note of this new Iranian endeavor. An article at Al-Monitor notes that “Iran has sought to improve relations with Tajikistan in recent years, as it has with other states in Central Asia. “In February, officials from both countries pledged to increase bilateral trade to $500 million annually,” it said. “Trade between the two countries amounted to $121 million in 2021, a more than 100% increase from the $55 million in 2020.”

All of this points to Iran building on its desire to focus on the east, part of a larger strategy that involves its new 25-year agreement with China as well as its interest in India and Afghanistan. Tehran wants to pivot away from the West and believes that strategy can best be honed in places like Central Asia. Iran’s Tasnim says that “the production of Iranian Ababil-2 UAVs in Tajikistan is considered as part of plans for the expansion of military and defense cooperation between the two Persian-speaking nations.”

The Ababil-2 is not the most advanced drone in Iran’s arsenal. It is more like a workhorse drone, designed years ago. That does not mean it is not dangerous – it is a military drone, and will be used for military purposes. In that sense, it is not clear what the end goal is here. Will the drone potentially be used as part of the military balance of power in Central Asia or directed at possible use to secure border areas of Afghanistan in case of trouble there?

Iran clearly wants to use its drone technology to export its influence. It has done this in Lebanon, Iraq, Syria and Yemen. In these cases, however, it works through armed proxies and military  groups. These are not government-to-government drone operations and don’t involve factories that are open to the media. The point is that Iran’s public acknowledgment of what it is doing appears to be more about showing that it can behave in a normal manner as a state-to-state seller of products, as opposed to working through armed proxies and groups. This is important because Tehran often prefers non-official regimes and semi-legal exports of weapons. It prefers trafficking in arms over actually doing things normally. The drone factory is an attempt to show that Iran can be normal. Some media interpreted this as balancing the Taliban’s (the movement prohibited in Russia) rise in Afghanistan through this new drone relationship.

Iran's desire for partnership with the Shanghai Cooperation Organization was shown in a previous summit in Dushanbe. This is all about projecting Iran’s influence to the east, and that its technical know-how was not harmed by America’s sanctions.

However, Tehran has used drones to target Israel, including drones flown from Syria, Iraq and also directly from Iran. This means that the drone program, including exports to Hezbollah, the Houthis and others, is a serious threat. Whether Iran is exporting that threat to Central Asia, or merely exporting technology and construction, is unclear. The lack of clarity is bolstered by it not being clear what Tajikistan is going to do with the drones, or where they will go after assembly in its new factory.

Stabilization through digitalization and normalization in Asia