Kyrgyzstan the missing link in China's railway to Uzbekistan 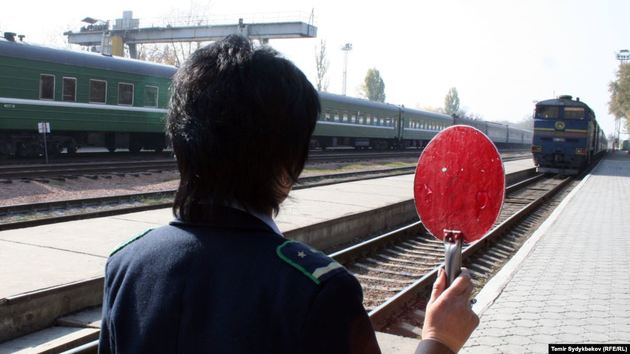 The big problem with the announcement in early June that the first freight train had left the Chinese city of Lanzhou bound for the Uzbek capital, Tashkent, is that the railway link in Kyrgyzstan needed for the trip is not yet done. Not even close to being completed, Radio Free Europe writes in the article Kyrgyzstan The Missing Link In China's Railway To Uzbekistan...And Beyond. It would seem the China-Kyrgyzstan-Uzbekistan (CKU) railway is just another of those grand projects conceived decades ago that might never be built. But in this case there is some hope it will be realized -- though it will probably have to wait for better times in a world economy.

To compensate for the lack of a full Kyrgyz link on this project, a new "road-rail" combined-cargo transport line has been devised. The train that left Lanzhou station in China's northwestern Gansu Province on June 5 is carrying a load of some 230 tons of electrical appliances worth about $2.6 million. The train first traveled to Kashgar in the western Xinjiang Uyghur Autonomous Region, near the border with Kyrgyzstan. From Kashgar, the goods were loaded onto trucks for the journey westward across Kyrgyzstan to the city of Osh, where they were reloaded onto a train headed for Tashkent. Part of that route used the Pap-Angren railway line in Uzbekistan that the Chinese helped build and which opened in early 2016. The loading and unloading of goods, along with the trucking operation, will be repeated when the train from Tashkent leaves for China due to carry some 525 tons of Uzbek cotton worth some $1 million.

On June 17, Kyrgyz President Sooronbai Jeenbekov held a meeting with Foreign Minister Chingiz Aidarbekov, Transport and Roads Minister Janat Beyshenov, and Vasily Dashkov, the head of the state railway company Kyrgyz Temir Zholy, to discuss railway issues that included the line from China to Uzbekistan. Jeenbekov reportedly described the railway line connecting China and Uzbekistan as one of the largest and most strategically important projects for Kyrgyzstan.

On June 18, according to the Kyrgyz Temir Zholy website, "construction of the China-Kyrgyzstan-Uzbekistan railway will start in a month," and company head Dashkov said he didn't see any "particular obstacles" but rather just a "few points [to conclude]." But that message disappeared from the website on June 19. The head of Kyrgyz Temir Zholy's Railway Design and Construction Department, Zhamshitbek Kalilov, later said the June 18 post was a misunderstanding and said there is no way construction will start in July. 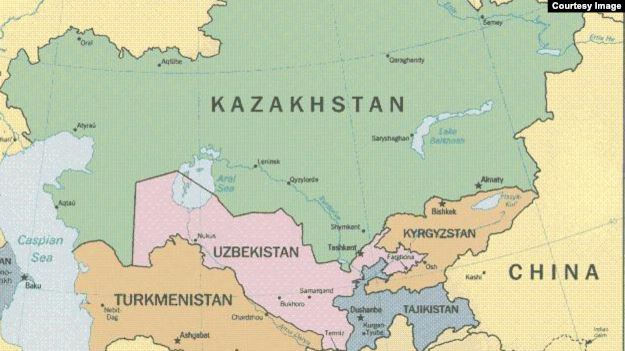 Kalilov said talks with Chinese and Uzbek officials were continuing, mainly by videoconference due to the coronavirus, but he mentioned there were still issues with financing and the perennial problem of track-gauge size.The CKU railway has been discussed since the latter part of the 1990s. The prime ministers of China, Kyrgyzstan, and Uzbekistan all met at the Kyrgyz-China Irkeshtam border post on July 21, 1997, to open the crossing. They said at the time they would also soon open the Andijon-Osh-Kashgar highway, though the highway only started being used to ship goods in early 2018 -- when they promised a railway would also connect the three countries.

In June 2001, Kyrgyz Transportation and Communications Minister Kubanychbek Jumaliev announced an agreement had been reached for construction of the CKU railway line but it was more than six years later -- in January 2008 -- that China's Xinhua news agency reported construction of the railway had begun and the line would be completed in 2010. Since then, the project was often mentioned when Uzbek or Kyrgyz officials met with Chinese officials but little progress was made on finishing it.

In 2017, Kyrgyz President Almazbek Atambaev spoke about the railway project, objecting to the fact that the proposed railway line would not make any stops in Kyrgyzstan. Atambaev proposed the railway take a different route than the one planned, so that trains would also serve the remote Kyrgyz towns of At-Bashi and Kazarman, a significant deviation north from the original plan and one that Atambaev admitted would add $1.5 billion to the cost of building the railway.

Kalilov indicated the route was still not completely agreed upon. In March 2018, when Kalilov was transport minister, he said China was insisting on the shortest route possible through Kyrgyzstan. That likely means through the Irkeshtam crossing, some 230 kilometers nearly due west from Kashgar, and the route that trucks currently use as part of the road-rail link. But Kalilov said Kyrgyzstan was exerting "all efforts so that the railroad goes through the pass at Torugart," which would run some 165 kilometers north from Kashgar before turning west into Kyrgyzstan and head toward Uzbekistan. 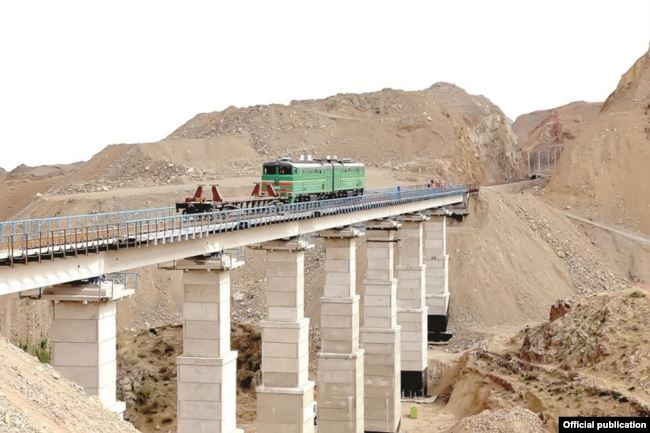 Kyrgyzstan does not have the extra $1.5 billion Atambaev mentioned and, in the June 18 message briefly posted on the Kyrgyz Temir Zholy website, Dashkov said the railway through Kyrgyzstan had an estimated price tag of some $4.5 billion. The line is not long, only some 450-500 kilometers, but it passes through the mountains, sometimes at altitudes of 2,000 to 3,500 meters. That means it will require the construction of nearly 50 tunnels -- and more than 90 bridges. A very tall order for any country but especially one like cash-strapped Kyrgyzstan.

Dashkov said that when it came to money, "the Russian and Uzbek sides are ready to help us." It was a curious statement, as neither of those countries are in a financial position to spend that kind of money on construction of a railway through Kyrgyzstan and, in Russia's case, it is difficult to see why Russia would spend money on a project that would provide a trade route between Asia and Europe that avoids Russian territory.

That said, there were reports at the end of November 2019 that Jeenbekov said Russia had provided Kyrgyzstan with 200 million rubles (then worth some $3.15 million) to prepare the "technical-economic basis" for the CKU railway, and Russian Foreign Minister Sergei Lavrov said in April 2020 there were talks with China about Russia's participation in building the CKU railway.

Reports at the start of June about the opening of the road-rail, combined-cargo transport line claimed that if and when a railroad did go through Kyrgyzstan, it would be the shortest route for China to trade with Europe and the Middle East. Currently, the main railway line connecting China to Europe and the Middle East runs through Kazakhstan's Khorgos crossing and one report said that by shipping through Kyrgyzstan and Uzbekistan the route would be "295 kilometers shorter than through Khorgos." It also claimed that "compared with the traditional route [through Khorgos], the time saved would be as much as five days." That prospect might not be appealing to Kazakhstan, but several other countries stand to benefit from such a route if the CKU line is extended further westward.

More immediately for China's interests, the completion of the CKU line would open a line to the Mingbulak oil field in Uzbekistan. Mingbulak is best-known for being the site of possibly the worst inland oil spill in history. An explosion at a well in early March 1992 led to some 285,000 tons of oil being spilled, which helped fuel a fire that burned over an area of more than 60 hectares for some two months. The site was abandoned until the China National Petroleum Corp (CNPC) signed a deal in October 2008 (that runs until 2035) to reopen and develop the field. Work was suspended again in 2015 due to the low price of oil on world markets, but resumed in 2017, and the CNPC believes there is more than 30 million tons of oil there and that Mingbulak can eventually produce some 4,000 barrels per day. Not a huge amount, especially for China's needs, but it is less than 500 kilometers from China's border. As it stands now, the only way to transport it is via road. But Mingbulak is located in Uzbekistan's Namangan Province, as is the Pap railway station that is on the CKU railway line.