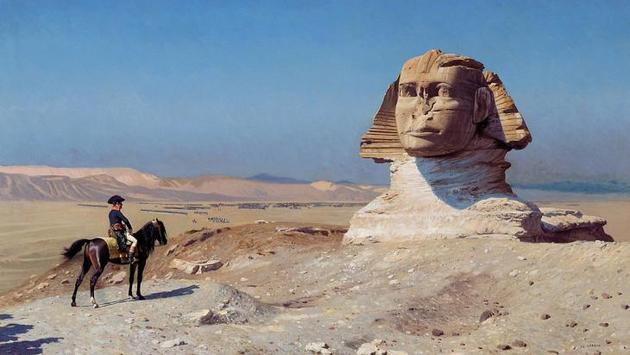 Napoleon Bonaparte’s 1798 invasion of Egypt represented the first modern attempt to incorporate an Islamic society into the European fold. Although the expedition was a military fiasco, it left a lasting legacy in the region. "In the beginning was Napoleon". So commences the late Thomas Nipperdey’s acclaimed history of nineteenth-century Germany, Germany from Napoleon to Bismarck. But although Nipperdey was referring to Napoleon Bonaparte’s central role in creating modern Europe, in many respects his statement also applies to today’s Middle East, Alexander Mikaberidze writes in the article Casting a long shadow – Napoleon's intervention in Egypt.

America finds itself in the grips of two epidemics, each of which has exposed deep inequalities across races and levels of educational attainment. Between rising "deaths of despair" among working-class whites and higher coronavirus mortality rates among African-Americans, the stunning secular decline in U.S. life expectancy will continue. Napoleon’s 1798 invasion of Egypt marked the first instance of liberal imperialism and highlighted the speed with which the French Revolution had transcended France’s borders – and Europe’s. Although the expedition was a military fiasco, it left a lasting legacy in the region.

For starters, the invasion represented the first modern attempt to incorporate an Islamic society into the European fold. It also constituted the formative moment for the discourse of Orientalism, when all of its ideological components converged and a full arsenal of instruments of Western domination was employed to protect it. The occupation itself did little to modernise Egyptian society, because the revolutionary principles that the French tried to introduce were too radical and foreign, and met determined local resistance. But Napoleon created a political vacuum in Egypt that was soon filled by Kavalali Mehmet Ali Pasha, who, within a decade of the French departure, began laying the foundation for the reformed and modernised Egypt that later would play such an important role in the Middle East.

Napoleon’s Egyptian campaign also upended traditional European policies toward the region. Instead of striking its intended blow at Britain’s imperial power, the French invasion drove the Ottoman Empire, France’s traditional ally, into an alliance with its former adversaries, Russia and Britain, and transformed the nature of Franco-British rivalry in the East. Up to that point, France traditionally had launched forays into India from island bases in the Indian Ocean, relying on naval power that the British could counter with their own fleet. But Napoleon’s attempt to conquer Egypt by land profoundly altered this equation by forcing Britain also to consider the possibility that other powers might approach India through territories adjacent to the Indian subcontinent.

This imperative drew Britain into a lasting endeavour to secure additional dominions to protect its Indian possessions against an overland attack. "We have won an empire by armed might," observed British East India Company officials in 1798, "and it must continue to rest on armed might, otherwise it will fall by the same means to a superior power. " This reliance on force underpinned the British Raj until 1947 and sustained British interventions in Egypt, Yemen, Oman, Iran, and Afghanistan.

The wider Napoleonic Wars cast a long shadow over the Islamic heartland. Although fundamentally European in nature, they shaped Europe’s relationship with the Islamic world for the next century. The Ottoman Empire found itself the target not only of Russian imperial ambitions, but also of French, Austrian, and British designs that contributed to its continued territorial losses and the emergence of the "Eastern Question". Moreover, the similarities between Napoleon’s rhetoric and methods and those used in twentieth-century Western interventions in the Middle East underscore the long-term impact of his legacy.

In 1810-1812, a century before "Lawrence of Arabia", Napoleon’s agents were seeking to encourage Arab tribes in Syria and Iraq to unite in revolt against the Ottomans. And later French governments realised Napoleon’s vision of a French colonial empire. In 1830, French troops, some of them veterans of the Egyptian campaign, invaded Algiers on the basis of contingency plans developed under Napoleon two decades earlier, and laid the foundation for a period of French colonial rule that lasted until 1962.

Iran, its own empire a thing of the past, endured an equally painful fate, becoming a pawn in the hands of European powers. Double-crossed by both France and Britain, Iran suffered humiliating defeats at the hands of Russia, which acquired Georgia and south eastern Caucasia by 1813 and all but supplanted Iranian influence in the region.

The Napoleonic Wars revealed glaring inefficiencies in the Ottoman and Iranian states, and highlighted the growing military and economic imbalance between them and the leading European powers. The wars thus ushered in an era of state-sponsored reforms, as Ottoman, Egyptian, and Iranian political leaders sought to remake their administrations and militaries in a European image.

Herein lies one of the most enduring Napoleonic legacies in the Middle East. Reform-minded rulers such as the Ottoman Sultan Mahmud II, Mehmet Ali of Egypt, and Iran’s Crown Prince Abbas Mirza did not question the cultural norms or social structures on which traditional order rested. Instead, they believed that European-style military and administrative reforms would enable them to consolidate their domestic power and protect their states more effectively from outside threats.

But these reforms entailed the introduction of Western practices into Islamic societies and posed challenges to existing power structures, because they inserted the central government into the daily lives of its subjects more directly and pervasively than ever before. That is why many groups – including the ulema (religious leaders), the Saudis in central Arabia, Ottoman janissaries, and Iran’s traditional elites – reacted so negatively, rejecting even those modernising changes that could have better protected their respective states.

This confrontation increasingly came to be seen as a struggle for the very essence of the Islamic way of life. And its profound effects, along with other aspects of Napoleon’s legacy, continue to reverberate in the Middle East today.