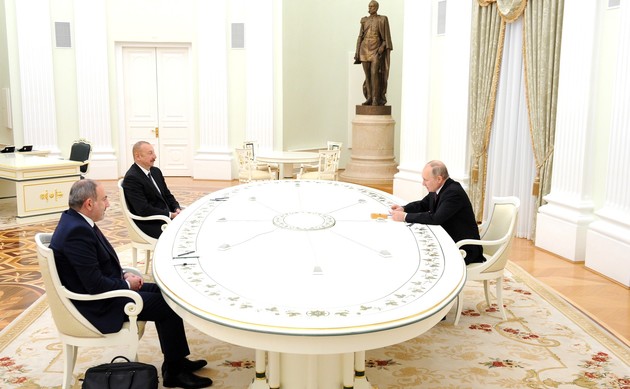 One of its most important points in the trilateral statement signed by Armenia’s prime minister Nikol Pashinyan, Azerbaijan’s president Ilham Aliyev, and Russia’s president Vladimir Putin in Moscow on 10 November 2020—which established the ceasefire and capitulation of armed forces of the Republic of Armenia in the Second Karabakh War—is the unblocking of transport communications in the South Caucasus region, Robert M. Cutler, fellow at the Canadian Global Affairs Institute, writes in the article for Geopolitical Monitor.

Although the trilateral statement mentions reconnecting the Nakhchivan exclave with the main body of Azerbaijan (via the Zangezur corridor) in particular, its ninth point begins with the simple and universal statement: “All economic and transport connections in the region shall be unblocked.”

For the last year, Armenia has found different ways to block the implementation even of the Zangezur Corridor project, even though it is to everyone’s benefit. In the most recent weeks, however, this has been changing. Pashinyan won snap parliamentary elections in Armenia in June 2021, despite Yerevan’s catastrophic loss of the Second Karabakh War a year ago. This occurred because of the complete political bankruptcy of the “Karabakh clan” that was hegemonic on the Armenian political scene from the late 1990s through 2018. Since the election earlier this year, Pashinyan has been able to install practical cooperation-minded personnel in key ministries and reduce the influence of the Yerevan “war party.”

The former defense minister Davit Tonoyan, for example, whose infamous slogan, “new war for new territories” typified the aggressive outlook of the old regime, is now under arrest for corruption along with other figures in the defense sector of the economy. On October 15, Pashinyan visited Moscow and agreed to open a railway between Nakhchivan and Azerbaijan proper, across the southern Armenian region Syunik, which borders Iran.

As the noted Russian military expert Igor Korotchenko correctly observed in a recent interview, the Zangezur corridor will make it possible to launch international transport communications in the full region. In his assessment, pragmatic Armenian politicians understand the benefits of the Zangezur corridor for Armenia and are ready to participate in it, but “they are afraid of becoming victims of a witch-hunt.” There are threats of terrorist attacks and assassination attempts even against Pashinyan and his family. Korotchenko is editor-in-chief of the authoritative review National Defense and a former chairman (and current member) of the Public Council at Russia’s Ministry of Defense. Further according to Korotchenko, despite the “revanchism” (literally, “revenge-seeking”) of “part of the population and part of politicians in Armenia,” nevertheless “Yerevan has an understanding of the benefits of the Zangezur corridor. "Peace and the development of Armenia are now incompatible with territorial claims against Azerbaijan. “I think they are [finally] ready participate in projects to unblock communications, including work on the opening of the Zangezur corridor,” Korotchenko recently said.

This is frustrating to the militant fringes of the Armenian diaspora, particularly in the United States, which has become even more vituperative and aggressive in its attacks on the “peace party” in Yerevan, in Baku, indeed in Washington itself. The Zangezur transport corridor is the headline project here but not the only one. It will catalyze the development of economic ties within the so-called “3+3” initiative (also called the “Six-way platform”) that brings together the three South Caucasus countries plus Iran, Russia, and Turkey.

To take just one example, Armenia, which lost its land connections with Iran that had gone through the de-occupied Azerbaijani territories, will gain a rail connection with Iran through Nakhchivan. But that is not all. Azerbaijan has surprised observers with the strength and resolve of its efforts to develop the de-occupied territories. According to one estimate, Baku has already invested almost $3 billion to promote such redevelopment. High-profile projects include roadways to improve connections to the rest of the country and airports (notably,  but not only Fizuli, which has already opened) that will also promote international links, including tourism.

The Azerbaijani government has provided tax benefits and created economic development zones in order to promote its initiatives. There are also initiatives to build “smart villages” and renewable-energy infrastructure. Most phenomenally, almost the whole region now has electrical power, including parts did not have it even before the last war.

With the price of oil not far from $100 per barrel, whereas Baku’s state budget had been planned according to an expectation of $45 per barrel, Azerbaijan has become and will continue to be the economic driver of economic development in the South Caucasus region for the foreseeable future. Past Armenian governments, led by the now politically bankrupt “Karabakh clan” had earlier refused Turkish proposals for all-round economic cooperation and development. That was nearly a generation ago, and the Armenian public is tired of mass poverty and elite corruption. Pashinyan is not a newcomer to Armenian politics. He had long been a supporter of Levon Ter-Petrosyan, the country’s president from 1991 until his forced resignation in 1998. When Ter-Petrosyan ran for president again in 2008, eventually losing to Serzh Sargsyan of the Karabakh, Pashinyan was one of his most outspoken supporters. Pashinyan made accusations of vote-rigging and fraud, and he was eventually jailed for “organizing mass disorders.” He won in the 2021 snap elections. These elections were an electoral battle mainly between Pashinyan and the other dominant Karabakh-clan politician, Robert Kocharyan. Next, the opening of the Zangezur corridor can lead Armenia out of the economic crisis

How did the first meeting between the special envoys of Armenia and Turkey end?

Ilham Aliyev: legal regimes of Zangezur and Lachin corridors should be same