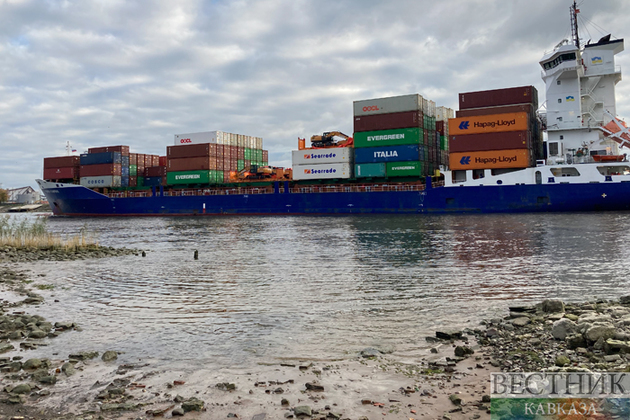 As the world's economies struggle to untangle unprecedented congestion in global supply chains, one of the world's busiest ports is backing an ambitious modernisation plan to provide solutions.

Singapore is forging ahead with a S$20 billion (US$14 billion) project to build the world's biggest automated port by 2040 - one that will double the existing space and feature drones and driverless vehicles. The city state started operations at 2 new berths last year, and construction work is continuing on the next phase, Business Times writes.

It's becoming more urgent for ports to add capacity and speed as the pandemic has changed the nature of global supply chains. The just-in-time system for shipping has broken down as exporters in Asia face obstacles getting goods transported to customers in the US and Europe, and the situation has only worsened this year with Covid lockdowns in China and the crisis in Ukraine.

Ports are the most visible choke points in the US$22 trillion arena for merchant trade, and a long-overdue transformation will require tackling a host of problems. Terminals are constrained by fading technology and limited space, while inefficiencies are compounded by containers piling up at yards and a short supply of workers and trucks.

Located in the Strait of Malacca, Singapore is a regular pit stop on container routes that connect Asian factories to consumers in Europe. The port, which handled the most trans-shipped cargo in the world in 2020, has come through the pandemic in better shape than most of its peers. "Singapore is the world's biggest trans-shipment hub, a position it will hold for years to come," said Choi Na Young Hwan, head of the international logistics analysis team at think tank the Korea Maritime Institute. "Singapore is setting itself as a benchmark for other ports."

Space presents a significant limitation for ports handling tens of thousands of containers a day, especially when trucking and shipping schedules are disrupted. The need for more room became clear during the pandemic, as docks overflowed with containers, and some ports had to place boxes along roadsides to await transport.

Singapore, a densely populated island slightly smaller than New York City, would seem a difficult place for expansion. But the city state, facing rising competition from rivals such as Shanghai, began allocating funds in 2013 to reclaim land needed to build a new port, Tuas, on the country's west coast. The port eventually will double its capacity to 65 million twenty-foot equivalent units (TEU) by 2040. The plan, set in place long before the onset of supply-chain upheaval, now appears prescient. The expansion has provided much-needed space to run operations efficiently and carry the city beyond the current pandemic, said Ley Hoon Quah, chief executive officer at the Maritime and Port Authority (MPA).

The major investment has also taken place as other governments and companies have held back from expenditure on ports. Shipping consultancy Drewry expects about 30 million TEU of capacity will be added per year from 2021-2026, down 25 per cent from 40 million TEU added each year during the decade to 2020. "Tuas capacity comes online while the industry is still challenged by shortages of port capacity," said Jeremy Nixon, CEO of Ocean Network Express (ONE). "Singapore will be able to look after its existing business and be able to further grow in 2022 and 2023 because of that."

Once Tuas is completed, Singapore will shut all its existing capacity and relocate everything to the larger space there. The 3 city terminals at Tanjong Pagar, Keppel and Brani will all shut and move to Tuas by 2027, while Pasir Panjang terminal will be consolidated by 2040. That will help consolidate operations into a more logical structure, allowing for faster handling of containers, which reached a record 37.5 million last year. The new arrangement will reduce the need for trucks to traverse downtown traffic while transporting cargo from one terminal to another.

Shortening the lines of trucks waiting at terminals is crucial for all ports. That's a major reason for bottlenecks, holding up the movement of goods during Covid lockdowns in Shanghai and causing significant delays in clearing boxes at California ports. The risks tied to trucking were also highlighted earlier this month when striking drivers in South Korea wreaked havoc on supply chains. The Singapore port's performance during the pandemic "hasn't been without hiccups and delays in terms of congestion, but also hasn't seen the major episodes of crisis other trans-shipment hubs have experienced," said Daniel Richards, an associate director at Maritime Strategies International.

Investment in ports isn't just about building more roads and trucks. It's also about improving the port's ability to track and coordinate what's happening at sea with all the moving parts needed to transport containers on land. Singapore will operate automated guided vehicles to move more containers between the yards and berths where ships wait. A human driving a truck will use sensors and wireless communications to lead a convoy of driver-less vehicles in and out of the port. Drones will be used for shore-to-ship deliveries, and aid security guards with checks.

The upgraded technology will save on manpower in the global labour crunch. But the Singapore port wants to take a further step by integrating information systems, enabling it to track cargo and communicate surges in demand to all supply-chain players. Singapore is among a growing trend of seaports cutting down on paperwork processes. It is one of 7 jurisdictions globally that accepts electronic bills of lading, a key supply-chain document that must be submitted or collected from ship captains before cargoes can offload from vessels. The shift is a major leap from the decades-old practise of submitting physical papers to verify cargoes. The process became a major headache during Shanghai's lockdown, as there were fewer people at the ports for delivering documents, bringing a halt to activity.

Singapore's strategy is to set itself apart from the competition, as global delays are forcing ships to rethink where along their route to stop, said the MPA's Quah. The port's goal is to make itself more efficient for ships to carry out all their needs: from banking to refuelling to unloading container cargo and storing it there until the next ships become available, she said. To be sure, Singapore has several things going for it that are difficult to copy elsewhere.

As a trans-shipper, it doesn't have some of the burdens faced by major end-destinations such as China, the United Kingdom and California. Those ports face more congestion because of the imports that need to be transported from the ships to places across the country and the stream of exports being trucked into the ports. The government's influence over imported labour and trade unions also allows for smoother operations. For example, it's more difficult for workers in Singapore to strike than at many other ports, limiting the risk of pushback from unions that have complicated efforts to automate. Still, Singapore's plans offer a possible way forward for other ports. "There is clearly a strategic requirement for every country to look at its supply chain and ensure it has a smooth container operation taking place, because if it doesn't, that is a cost to the economy," said ONE's Nixon.

The West froze Russia’s foreign reserves. Should Asia be worried?

Singapore to open embassy in Israel

IMF: Global growth is not expected